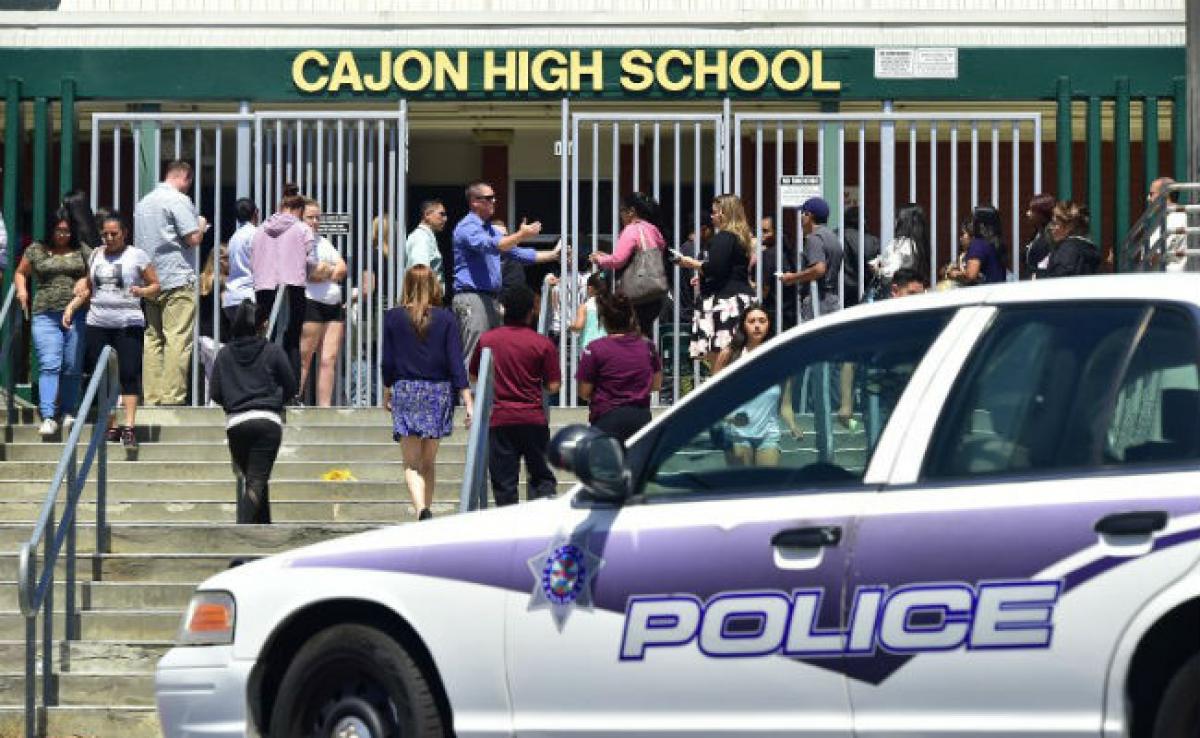 A gunman opened fire at an elementary school in the California city of San Bernardino Monday, killing one woman and wounding two students before turning the gun on himself, police said. The students were airlifted to a local hospital where their conditions were described as critical.

A gunman opened fire at an elementary school in the California city of San Bernardino Monday, killing one woman and wounding two students before turning the gun on himself, police said. The students were airlifted to a local hospital where their conditions were described as critical.

"This does appear to have been a murder-suicide with both male adult and female adult victim succumbing to injuries, with the male succumbing to a self-inflicted gunshot wound," lieutenant Mike Madden of the San Bernardino Police Department told a news conference.

"We had two students who were tragically injured and are listed as critical at this stage in area hospitals."

The identities of the victims have not been released but the Los Angeles Times reported that one of the adults involved in the shooting was a teacher, citing the local education authority.

"This is believed to be a case of domestic violence," the school district said in an email to staff, according to the Times.

Students at North Park Elementary School -- which has around 500 students between kindergarten and sixth grade -- were transported to a nearby campus, where they were "being well cared for, having snacks, playing games and watching a Disney movie," the police department tweeted.

"Police operations are continuing to secure the area. However, we do believe the threat is down," city police chief Jarrod Burguan said.

San Bernardino is located about an hour's drive east of Los Angeles.

The city became synonymous with gun violence when Syed Rizwan Farook and his wife Tashfeen Malik gunned down 14 people and wounded 22 others in December 2015 before being shot dead by police.

At the time, before the Pulse nightclub shooting in Orlando, Florida, it was the deadliest attack on US soil since September 11, 2001.

Monday's shooting will likely reignite the debate on gun violence in the US, where attempts to put in place tougher gun control measures have failed, despite a series of mass killings.

In one of the most notorious school shootings in modern US history, 20 children and six staff were massacred in 2012 at Sandy Hook Elementary in Newtown, Connecticut.

In June last year, 49 people were killed in a shooting rampage at Pulse, a gay nightclub.

More than 10 out of every 100,000 Americans die every year from guns, including suicides, a rate far higher than in other Western countries.

In February, Trump signed a measure into law blocking an Obama-era rule designed to keep guns out of the hands of certain mentally disabled people.

The rule was designed to prevent an estimated 75,000 people with mental disorders from being able to buy firearms as part of Obama's efforts to strengthen the federal background check system in the wake of the Sandy Hook massacre.

Adam Lanza, 20, who shot dead his mother using her guns before killing the students, adults and himself, had Asperger's syndrome and obsessive-compulsive disorder.

The Obama administration rule required the Social Security Administration to send in the names of beneficiaries with mental impairments who also have a third party manage their benefits.

But the Republican-majority Senate, backed by the National Rifle Association pro-gun lobby and disabled advocacy groups, voted 57-43 to overturn the regulation.