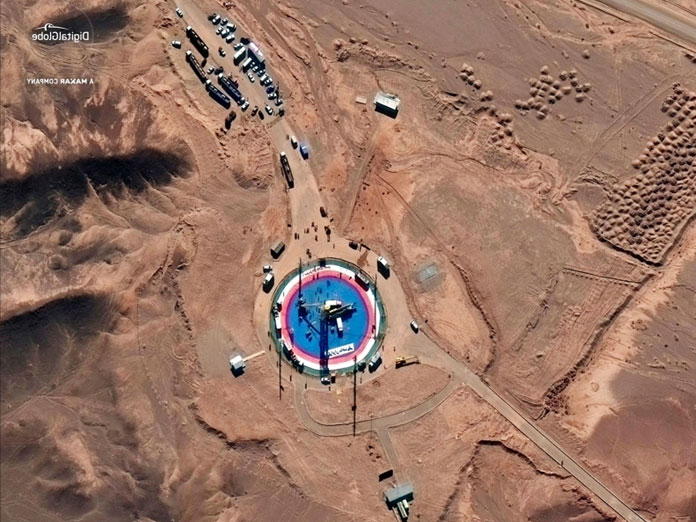 Iran appears to have attempted a second satellite launch despite US criticism that its space program helps the country develop ballistic missiles, satellite images released Thursday suggest Iran did not immediately acknowledge conducting such a launch

Dubai: Iran appears to have attempted a second satellite launch despite US criticism that its space program helps the country develop ballistic missiles, satellite images released Thursday suggest. Iran did not immediately acknowledge conducting such a launch.

Images released by the Colorado-based company DigitalGlobe show a rocket at the Imam Khomeini Space Center in Iran's Semnan province on Tuesday. Images from Wednesday show the rocket was gone with what appears to be burn marks on its launch pad. It wasn't immediately clear if the satellite, if launched, made it into orbit. In the images, words written in Farsi in large characters on the launch pad appeared to say in part "40 years" and "Iranian made," in different sections. That is likely in reference to the 40th anniversary of Iran's Islamic Revolution, which authorities have been celebrating this month. Iranian state media did not immediately report on the rocket launch, though such delays have happened in previous launches.

Iran has said it would launch its Doosti, or "friendship," satellite. A launch in January failed to put another satellite, Payam or "message," into orbit after successfully launching it from the same space center. DigitalGlobe analysts said the images from Tuesday suggest Iran used a Safir, or "ambassador," rocket in the launch. In the January launch, engineers used a Simorgh, or "phoenix," rocket.

It wasn't immediately clear what prompted the rocket choice. The Doosti, a remote-sensing satellite developed by engineers at Tehran's Sharif University of Technology, was to be launched into a low orbit. The US alleges such launches defy a UN Security Council resolution calling on Iran to undertake no activity related to ballistic missiles capable of delivering nuclear weapons. Iran, which long has said it does not seek nuclear weapons, maintains its satellite launches and rocket tests do not have a military component. Tehran also says they don't violate a United Nations resolution that only "called upon" it not to conduct such tests.

Over the past decade, Iran has sent several short-lived satellites into orbit and in 2013 launched a monkey into space. Iran usually displays space achievements in February during the anniversary of its 1979 Islamic Revolution. This year's 40th anniversary comes amid Iran facing increasing pressure from the US under the administration of President Donald Trump. The likely launch also comes after a Iran's Telecommunications Minister Mohammad Javad Azari Jahromi reportedly said Sunday that three researchers died "because of a fire in one of the buildings of the Space Research Center," without elaborating.