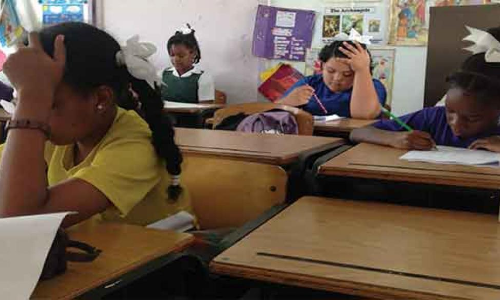 A one-on-one math tutoring programme can relieve anxiety about doing math problems in your kids, says a study by Indian-origin researchers.

New York: A one-on-one math tutoring programme can relieve anxiety about doing math problems in your kids, says a study by Indian-origin researchers.

"The most exciting aspect of our findings is that cognitive tutoring not only improves performance, but is also anxiety-reducing," said the study's senior author Vinod Menon professor of psychiatry and behavioural sciences at Stanford University School of Medicine in California, US."

It was surprising that we could, in fact, get remediation of math anxiety," Menon noted.Even if they are good at math, many children feel anxious about doing math problems.

For some, the anxiety persists throughout life, discouraging them from pursuing advanced math and science classes as well as careers that rely on mathematical expertise. The study included 46 children in third grade. Before receiving tutoring, each child took a test that assessed his or her level of math anxiety.

The brain scans of the children with high levels of math anxiety showed activation in the brain's fear circuits and so-called "fear centre", or amygdala, before tutoring. Children then participated in an intensive, eight-week tutoring programme consisting of 22 lessons involving addition and subtraction problems. Tutors gave the lessons to each child individually.

All of the children performed better on addition and subtraction problems after tutoring. The children who started the study with high levels of math anxiety had reduced anxiety after tutoring, while those in the low-math-anxiety group had no change in their anxiety levels.

After tutoring, the fear circuits and amygdala were no longer activated in children who had begun the study with high math anxiety, confirming that tutoring ameliorated the anxiety itself, rather than providing the kids with a coping mechanism that relies on other brain circuits.

"It is reassuring that we could actually help these children reduce anxiety by mere exposure to problems," the study's lead author Kaustubh Supekar from Stanford University noted. The study was published in The Journal of Neuroscience.