Congress MLAs informed me before going to Mumbai: Karnataka CM on horsetrading 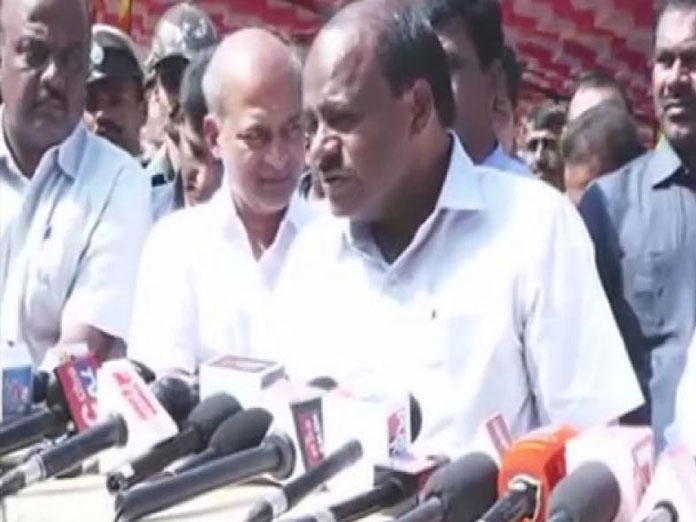 'My govt isn't under any threat. I know who all BJP is trying to contact and what they're offering. I can handle it,' said K'taka CM.

Bengaluru: Karnataka Chief Minister HD Kumaraswamy on Monday denied reports of three Congress MLAs visited Mumbai along with BJP leaders and said that they had informed him about the visit and were in touch with him during the visit.

"All three Congress MLAs are continuously in contact with me. They went to Mumbai after informing me. My government isn't under any threat. I know who all BJP is trying to contact and what they're offering. I can handle it, why should media be concerned?" emphasised Kumaraswamy while addressing media over MLA horsetrading reports in the state.

Kumaraswamy's statement came after Deputy Chief Minister and Congress leader G Parameshwara held an urgent meeting with party leaders over reports that the MLAs were allegedly taken by the leaders to Mumbai.

However, Parameshwara said that the meeting was on the upcoming budget session and to take stock of the implementation of last year's budget provisions.

Speaking to media after the meeting, Shivakumar acknowledged that three MLAs were in Mumbai but refused to divulge further details.

"Ahead of 2019 Lok Sabha election, all the parties are doing their agenda and Congress president Rahul Gandhi has clearly spoken about it. Everything will be fine and there is nothing to worry about. I am not talking about whether BJP MLAs are in Congress or Congress MLAs in BJP. I didn't say they are Congress MLAs, but it's sure that three MLAs are there (in Mumbai). I know their transportation records and flight details," he added.

However, Parameshwara asserted that party MLAs are intact, adding that the three MLAs may have gone to Mumbai for personal reasons.

"BJP leaders are saying this government will fall. But it won't happen. Some of our MLAs have gone, they can go for temples, holiday, family outings, we don't know. Nobody said that they're going to join BJP and destabilise the government. All our MLAs are intact," he told reporters here.

Karnataka Minister and Congress leader Krishna Byre Gowda, too, alleged that the BJP was making efforts to destabilise the Karnataka government. "The fact is BJP is indulging in poaching undemocratically. BJP is behind efforts to de-stabilise this government. It is not specific to today," he claimed.

Responding to the meeting organised by Parameshwara, Union Minister for Chemicals and Fertilisers DV Sadananda Gowda told ANI that the Congress should keep its house in order. He alleged that the Congress is failing to keep its flock in Karnataka together and instead, blaming the BJP.