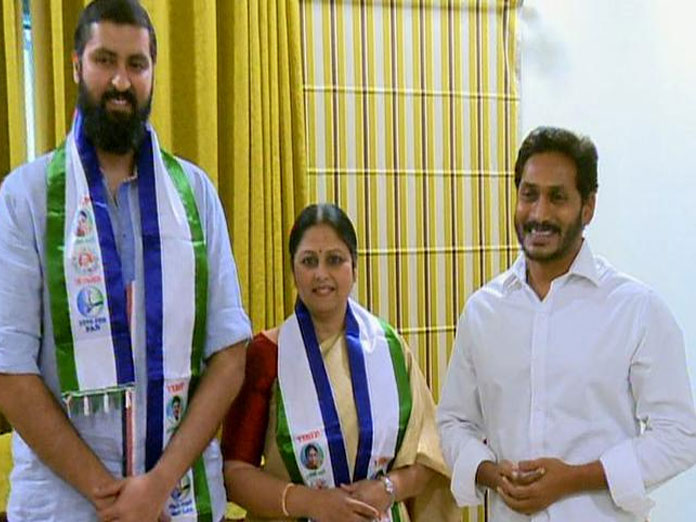 As the elections are nearing in AP, the leaders joining YSR Congress Party from the TDP is on in full swing

​Hyderabad: As the elections are nearing in AP, the leaders joining YSR Congress Party from the TDP is on in full swing.

The YSRCP chief YS Jagan Mohan Reddy, who is busy in the meetings with the party leaders, on the other side he is also looking out to use cinema charisma to attract the voters in 2019 general elections.

Following the co-stars, veteran actress Jayasudha is also going to join YSRCP on Thursday evening in the presence of YS Jagan at his Lotus Pond residence in Hyderabad.

As per party sources, the actress who has lots of fame and following in the Andhra, the party is planning her to give a ticket from Vijayawada or Visakhapatnam Assembly segment.

In 2009 elections Jayasudha won as MLA for the first time from Secundrabad Assembly constituency from the Congress party under the charismatic leadership of CM late YS Rajasekhara Reddy.

After the defeat in 2014 elections and state bifurcation, In 2016 she has joined Telugu Desam party. Though Jayasudha was in TDP, she was not actively participating in the party programmes.

It's the talk that the Rajamahendravaram MP and actor Murali Mohan has played the key role behind Jayasudha joining TDP.

For the coming elections MP Murali Mohan has decided to stay away from the politics, so in following his footsteps is Jayasudha also leaving the party? or due to the party's negligence towards the actress has made her quit TDP are the million dollar questions for now.