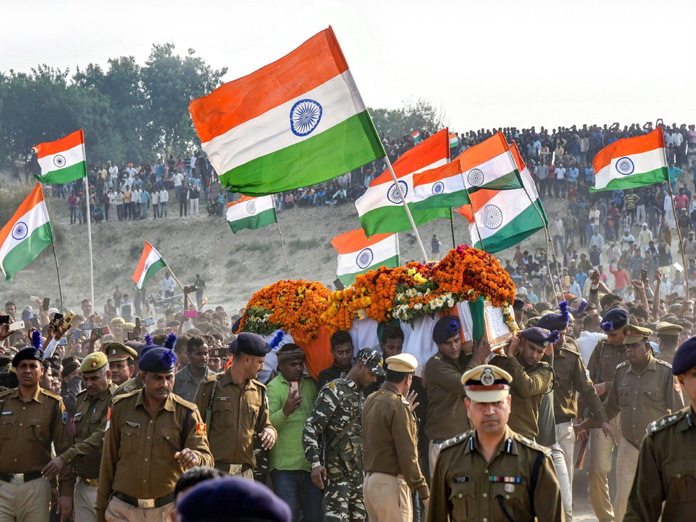 The United States has told India that it supports its right to defend itself against crossborder attacks, the Trump government said on Saturday, as India considers retaliation against the Pulwama terror attack by Pakistanbased militants

​Washington/New Delhi: The United States has told India that it supports its right to defend itself against cross-border attacks, the Trump government said on Saturday, as India considers retaliation against the Pulwama terror attack by Pakistan-based militants.

Tensions between India and Pakistan have risen again after New Delhi, incensed by the deadliest attack in Kashmir in decades, demanded that Pakistan act against the Jaish-e-Mohammad (JeM) militant group which is behind the bombing.

US National Security Adviser John Bolton spoke to his Indian counterpart Ajit Doval on Friday night, promising to help bring those behind the attack to justice, the Indian Foreign ministry said in a readout of the phone call.

“The two NSAs vowed to work together to ensure that Pakistan cease to be a safe haven for JeM and terrorist groups that target India, the US and others in the region,” the Foreign ministry said. “They resolved to hold Pakistan to account for its obligations under UN resolutions,” it added. In New Delhi, leaders of political parties met and said they stood behind the government in its resolve to tackle terrorism.

Prime Minister Narendra Modi, who has faced calls for retribution, said on Saturday that he had given a free hand to the military to respond to acts of violence. “The country understands the anger simmering among the soldiers,” he said at a rally in Maharashtra. As the bodies of the policemen who died in the car bomb reached their homes in small towns across India, crowds waving the Indian flag gathered in the streets to honour them and demand revenge. Others held flowers as they walked behind the coffins in the towns of Jabalpur, Varanasi and Moga.

In Jammu, authorities imposed a curfew for a second day after mobs attacked vehicles and pelted stones at the homes of Kashmiris. Sanjeev Verma, the divisional commissioner of Jammu, said curfew will remain until further orders to maintain law and order. An army column staged a flag march. Pakistan condemned Thursday’s attack in which 44 paramilitary police were killed when the bomber slammed into a military convoy and denied any complicity.

US lawmakers rally behind India
Describing the Pulwama terrorist attack as a despicable act of violence, top US lawmakers have rallied behind India's effort to fight terrorism and said that such heinous crimes will not weaken the resolve of its people. So far, more than 70 American lawmakers, including 15 Senators, have condemned the attack.

The "terrorist attack against Indian paramilitary police is a despicable act of violence, however, I know it will not weaken the resolve of the Indian people," said Senator Thom Tillis, a member of the Senate India Caucus. "What a terrible terrorist attack in India. America stands with our Indian friends and allies against this despicable atrocity. Our thoughts are with the victims and their families," Senator Bill Cassidy said.

"I condemn the terror attack yesterday in Jammu and Kashmir. My thoughts are with the families who lost loved ones in this horrific attack," said Senator Sherrod Brown. Other US lawmakers also took to Twitter to condemn the attack.

"I strongly condemn the heinous terrorist attack in Kashmir, one of the deadliest attacks in the region in decades. My prayers are with the families of the victims," Senator Cory Booker tweeted. "My sincere condolences to the Indian people after the horrific terrorist attack yesterday in Kashmir. The United States stands strong with India in the face of terrorism. We must work together to fight this evil," Senator Marco Rubio said.

"Saddened and angered by today's terrorist attack in Jammu and Kashmir. Tammy and I are keeping the victims' families in our prayers during this difficult time. New Jersey stands with India against the threat of terrorism," New Jersey Governor Phil Murphy said. "My thoughts are with the victims and their families today. America stands with the Indian people and strongly condemns this senseless violence," Indian-American Congressman Dr Ami Bera said.