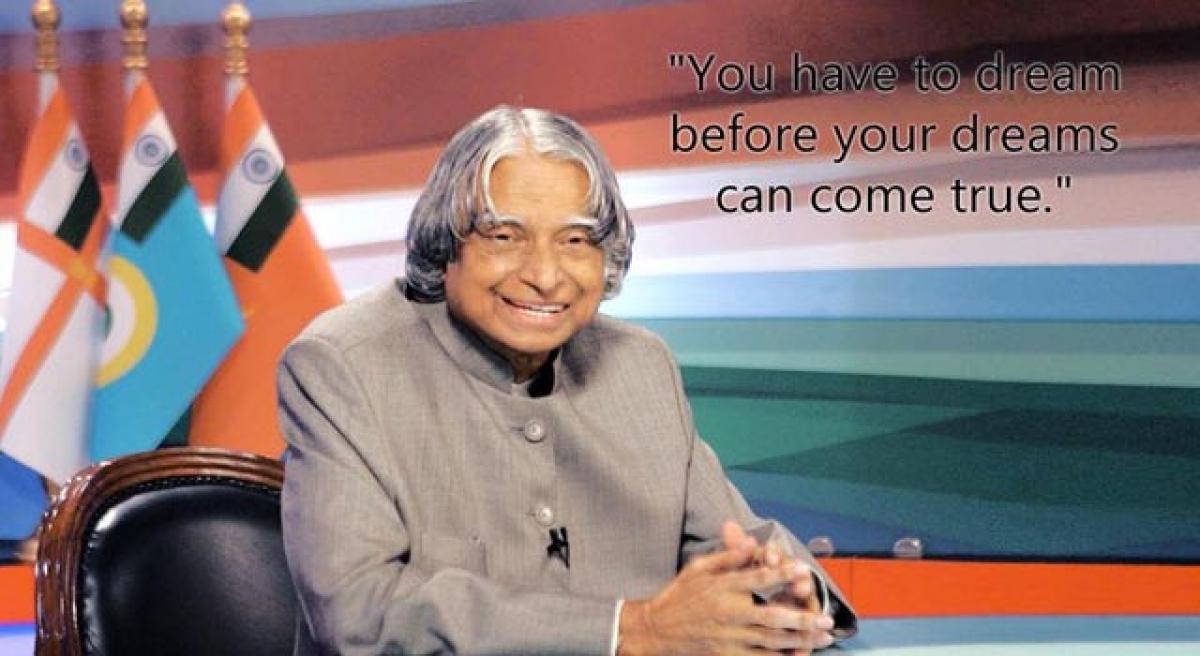 Former late President and Missile Man of India Dr APJ Abdul Kalam\'s disarming smile, positive demeanor and modesty were what earned him the title of People\'s President. Though Dr Kalam is not alive today, his words will continue to inspire people for generations to come.

Former late President and Missile Man of India Dr APJ Abdul Kalam's disarming smile, positive demeanor and modesty were what earned him the title of People's President. Though Dr Kalam is not alive today, his words will continue to inspire people for generations to come.

It was in 2010 when the United Nations decided to mark the importance of India’s former President and great scientist APJ Abdul Kalam and declared his birthday as ‘World Students Day.’ October 15, which is Dr Kalam’s birth anniversary, is celebrated as a day for students all around the world. Even Dr Kalam always expressed his wish to be remembered as a teacher by the people.

Bharat Ratna Avul Pakir Jainulabdeen Abdul Kalam, generally known as Dr APJ Abdul Kalam, was the 11th President of India (2002-2007). By profession he was a scientist and an administrator in India. He worked with Indian Space Research Organization (ISRO) and Defense Research and Development Organization (DRDO) as an aerospace engineer before becoming the President of India.

Dr Kalam achieved outstanding success from humble beginnings. The story of his remarkable life is known to every Indian schoolchild. Given our societal attitudes and lack of access to quality education, it is extremely difficult for Indian children not born to the privileged to fulfil their potential and make a mark in life.

Millions in India saw in Kalam the hope of fulfilling aspirations and achieving eminence in their chosen field. He kept urging young Indians to break out of the shackles of poverty and tradition, to dream big and to work hard to fulfil their aspirations. And he always linked individual aspirations with national greatness. It is this consistent articulation of individual growth with public good that has left an enduring impact on most Indians, particularly students and youth.

Here are some amazing things that made Dr Kalam an extraordinary man. He was born on October 15, 1931. He came from a humble background. He sold newspapers to support his family financially when he was a kid. Known as the Father of Indian Missile Technology, he played a prominent role in India’s 1998 nuclear weapons tests.

He brought dignity to whatever he did. Even politics! Before becoming the President, he worked as an Aerospace Engineer with DRDO and ISRO. He was called the “Missile Man” of India. Dr Kalam was much more than a political figure. He was a scientist, writer, inspirational speaker and motivational figure.

His infectious personality had not just inspired Indians but also people across the globe. Kalam was nominated for Youth Icon of the Year award by MTV in 2003 and 2006. His age was 73 and 76 respectively then. In 1998, he along with cardiologist Dr Soma Raju developed a low-cost coronary stent. It was later named ‘Kalam-Raju Stent’ in their honour. Dr Kalam had received several awards and recognition for his extraordinary contribution to scientific research and modernization of defense technology in India.

When Dr Kalam first moved to Rashtrapati Bhawan, he asked all luxurious rooms to be locked up as he didn’t want to use them. He was a great inspiration to many, especially kids, and always inspired them to dream big and achieve great goals in life. Kalam wrote 15 books in total, out of which the most read and widely published works of his writings are Wings of Fire, Ignited Minds and Vision 2020. He was also a Veena exponent. He loved students and died doing what he loved the most: spending time with students and being among them.

Thus he spake
The missing place of Dr Kalam can never be filled but his inspiring words will forever be with us and inspire us to do more. From bunking classes to his take on failure, here are some quotes from him to live your life by.

On memories
Sometimes it's better to bunk a class and enjoy with friends, because today when I look back, marks never make me laugh, memories do.

On failure
Don't read success stories, you will only get a message. Read stories of failure and you will get ideas to succeed. If you fail, never give up because F.A.I.L means “First Attempt in Learning”.

On dreams
Dreams are not what you see in sleep. They are the things that do not let you sleep.