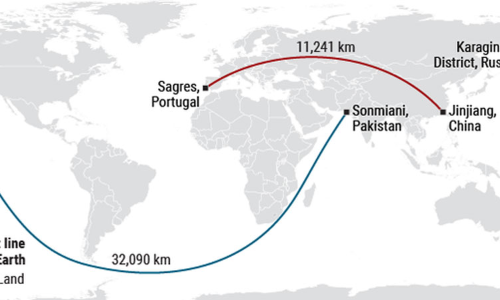 If you want to go on the longest boat ride in the world, but you don’t have a rudder, what route would you take? Five years ago, a reddit user proposed that traveling overseas from southern Pakistan to northeastern Russia would yield a trip of 32,090.3 kilometers—the longest straight-line journey on Earth. Now, a team of scientists has finally proved him right.

The reddit post came from user kepleronlyknows, aka Patrick Anderson, an environmental law attorney in Decatur, Georgia. He says he first became intrigued by the question when he was scrolling through Wikipedia. The line—nothing but a set of coordinates—appeared in an entry titled “Extreme points of Earth.” Anderson mapped the points and published a video to show that the line was, in fact, straight. “You may be a bit disappointed, as I did not discover the path, but merely thought it was cool enough to put on a map,” he says.

Rohan Chabukswar also thought it was cool. But the physicist at United Technologies Research Center Ireland in Cork wanted more. “There was no proof,” he says. To get it, he and his colleague Kushal Mukherjee, an engineer at IBM Research India in New Delhi, started with data from the National Oceanic and Atmospheric Administration’s ETOPO1 Global Relief model of Earth’s surface, which shows the entire planet at a spatial resolution of approximately 1.8 kilometers, meaning the smallest features captured by the map would be 1.8 kilometers in size. Because the model also includes altitude data, the duo could be relatively sure of which points were on land and which were at sea.

Initially, the researchers tried to brute force the answer by examining every possible great circle on the planet. At 1.8 kilometer resolution, that left them with 233,280,000 possible great circles, with each containing 21,600 points on either land or sea. In total, that meant 5,038,848,000,000 points that would need to be verified, a computation that was just too taxing.

So, the team instead turned to an optimization algorithm known as “branch and bound,” a computer program that tests only a few subsets of all the possible great circles. It then fine tunes the search over and over again for lines that seem promising—those with the longest paths. It took a standard laptop computer just 10 minutes to home in on the optimal solution. When the results came back, Anderson and his Wikipedia muse were proved correct, the team reported last week on the preprint server arXiv.

In full, the journey would take a boat from the sandy shores near Sonmiani, Pakistan, down through the gap between Madagascar and continental Africa, threading the needle between South America and Antarctica, and finally heading north-northwest across the Pacific Ocean while dodging the Alaskan archipelago until landing on the frigid beaches of the Karaginsky District in Russia.

Despite the fact that the line looks curved, it’s actually not if you transcribe it onto a globe, as the three Azimuthal projections above show.

Chabukswar and Mukherjee then ran the same algorithm with the parameters reversed to find the longest such path across land without crossing any large bodies of water. This took the computer longer—45 minutes—but it ultimately revealed an 11,241-kilometer path across 15 different countries, starting near Quanzhou in eastern China and ending in the town of Sagres in western Portugal.

Keith Clarke, a geographer at the University of California, Santa Barbara, says the study is an interesting use of optimization. But he points out that Earth isn’t a perfect sphere; the planet’s gravity and rotation cause it to bulge ever so slightly around the equator. Because the sea route squeezes through such a tight gap between Antarctica and South America, Clarke wonders whether even the slight bulge could cause the path to run aground. On land, the model is limited by the resolution of the data set. Because the data don’t show details smaller than 1.8 square kilometers, the model could be missing tiny bodies of water that might appear on the China-to-Portugal path, Chabukswar says. He and Mukherjee don’t recommend driving it.

As for Anderson, he admits that the math is “largely above my head.” But he calls it an excellent end to the search. The next task? Going back to the beginning, to figure out who made that Wikipedia post.