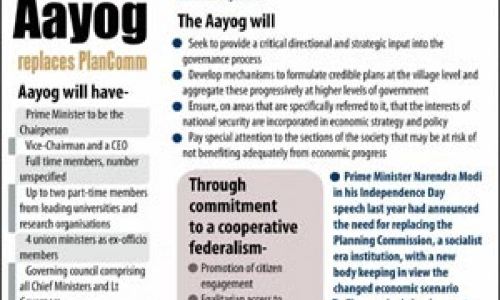 The Indian economy has sharp contrasts. On the one hand, it prepares itself for a major surge by way of higher public investments, FDI and a push to agriculture through a better insurance scheme.

The Indian economy has sharp contrasts. On the one hand, it prepares itself for a major surge by way of higher public investments, FDI and a push to agriculture through a better insurance scheme. And, on the other hand, it faces a major problem -- of over $2 billion forex outgo by foreign institutional investors, foreign education, and whether it should refinance Rs 5 lakh crore NPA-hit PSU banks, deviate or not from fiscal consolidation, falling deposit interest rates and other fragilities such as high retail inflation and sluggish industrial index.

Does this then mean the country is not progressing? No, the nation is progressing. The Government is preparing to invest Rs 80,000 crore on highways, of having a GDP growth that would possibly be over seven per cent and build hi-speed bullet trains. However, at the same time, it is unwilling to do away with the perpetual loss-making and public investment guzzling Air India as well as stop the monopolization of airport operations.

Worse, it also wants to take an economically unwise decision of reducing interest rates on small savings of National Savings Certificate, savings banks, fixed deposit rates and the Public Provident Fund (PPF), notwithstanding that the savings, a security for the poor, has virtually been greasing the economy since 1960s.

Additionally, the people also fail to understand why those pilfering their money, now called NPA, are being doubly rewarded -- one for their action and two by the Government’s generosity of cutting the lending rates so that they can continue their predatory moves to swindle more. The Government, as is known, is burdened with the task of reducing fiscal deficit.

Therefore, the question arises why it should refinance the banks? As per Basel-III norms it has to put in Rs 1.80 lakh crore in PSU banks and has reportedly agreed to provide Rs 70,000 crore as equity. But the people would like to see it being paid by the swindlers and the bad bank managers and certainly not by cutting the interest rates.

Besides, the other nagging question is why should the honest always bear the burden and continue to suffer? The message doing the rounds in the politico-economic circles is that though the strict actions by Prime Minister Narendra Modi have brought a thaw in large scandals, these are yet to translate into benefits for the poor.

In the 1950s and 60s, the poor-funded schemes led to the growth of the country. It is so even now. Yes, strangely this is the plain truth. With whose funds are the roads being built? Not a single company has put a penny. Road cess alone has raised a corpus of over Rs 2 lakh crore since 2000-01 as 30 to 50 per cent of it has remained unutilized.

The people have also been seeking answers viz similar roads and other projects, which despite having recovered the full cost plus profits in about three years continue to fleece them. Is there any reason for being soft on the companies? Then there is inflation and a cut in subsidies. It is a strange contrast – high profits and low volume of business. The industry has not come up with a remedy. It has forced the Government to give sops during their high-profit era and is now again nudging for more concessions at the cost of the poor and farmers.

Sadly, the individual farmers have been suffering. They are getting low prices, no subsidy and are in high debt. The new crop insurance scheme may give them succour but that is no insurance against fleecing by the large houses that have got into this area. Commodity prices are complex. But somehow the society is unable to regulate these. These cannot be left to the whims of the operators. Growth is getting hit, disparity is growing and there are a few islands of prosperity -- not a healthy trend. Energy prices are slumping.

The NITI Ayog has to study avenues beyond the routine and ponder over these issues, stable prices and wages. It also has to suggest how the public-funded private sector can change mindset to invest for growth with a low profit model. A break from the Manmonhan Singh-Congress model is a must to give a politico-economic message and ensure faster all-inclusive growth. Will Modi pay heed?