It’s all about attraction 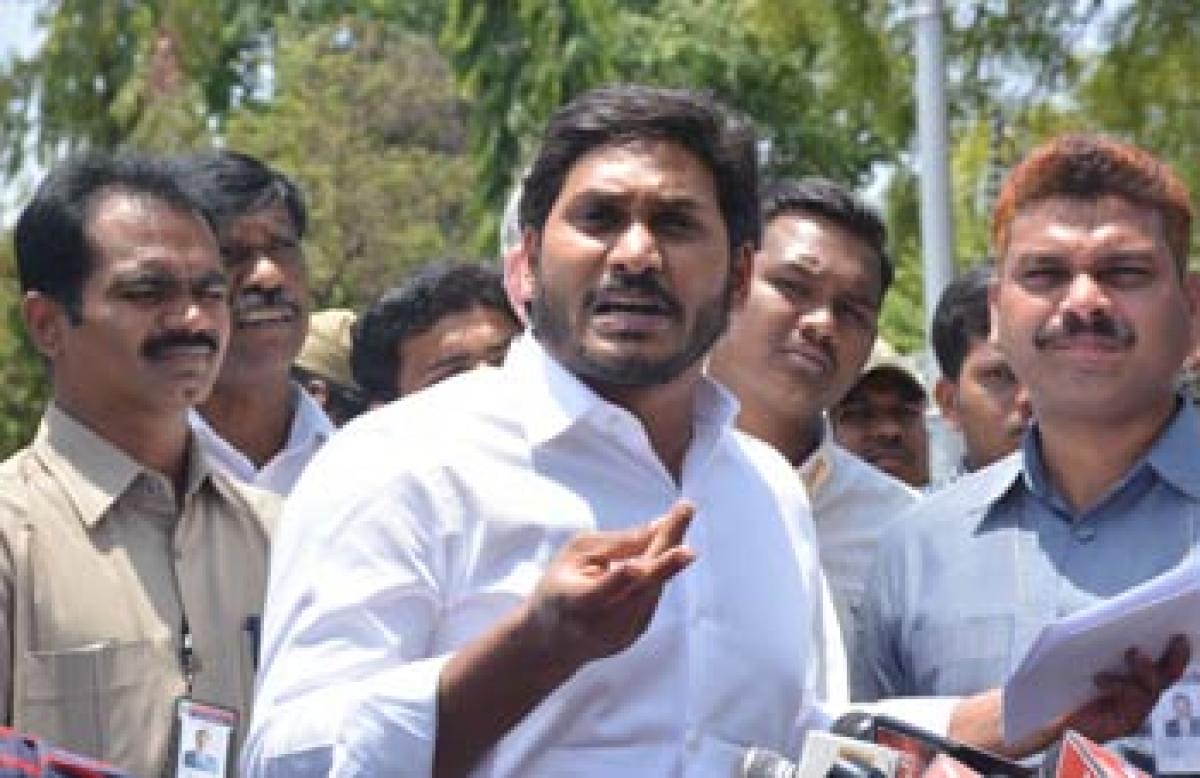 The winds of ‘Operation Akarsh’ aimed at decimating the major opposition party YSRCP seems to be sweeping across the political landscape of Andhra...

The winds of ‘Operation Akarsh’ aimed at decimating the major opposition party YSRCP seems to be sweeping across the political landscape of Andhra Pradesh. In fact, after the initial differences between the two Telugu-speaking states AP and Telangana, it now seems that both the Chief Ministers are adopting similar political strategies to ensure that they come back to power in 2019.

As part of this strategy, both the ruling parties of AP and Telangana have resorted to Operation Akarsh on a largescale. While TS has been much faster and hit the TDP hard in Telangana, the TDP has now started implementing this agenda in AP. It has so far admitted 13 MLAs and a few more are in the queue. Both the TRS and TDP are resorting to annihilation of opposition parties though there is no foreseeable threat to their governments.

What exactly is the game-plan of the TDP? Why is the process of decimating YSRCP continuing unabated? Who are among the next batch of MLAs to join the yellow party? These are the questions that are being raised in the political circles. Next in the line to join the TDP bandwagon is said to be MLA Gottipati Ravi Kumar, who represents Addanki segment from Prakasam district in the AP State Assembly.

According to sources, Ravi Kumar has made up his mind to join the ruling party on April 29. Like Ravi Kumar, two more YSRCP members from the same Prakasam district - Adimulapu Suresh (Santhanuthalapadu) and Pothula Rama Rao (Kandukur) are also reportedly contemplating joining the TDP. According to sources, the TDP is planning to woo another 22 to 25 legislators from the YSRCP to its side so as to make Jagan lose the post of Leader of Opposition.

According to party insiders, there is a proposal within the party to make Jyothula Nehru as the leader of the breakaway group, just as E Dayakar Rao led the breakaway faction of TTDP in the Telangana State Assembly, if another 22 MLAs from the YSRCP join TDP in the coming days. Of the 67 YSRCP members, so far 13 members have joined the ruling party and efforts are on to get to the magic number of 35.

The TDP leadership claims that they want to reduce YSRCP to a minority party in the assembly and make the breakaway members declare that they are the real YSRCP. The breakaway faction led by Jyothula Nehru would seek merger of the legislature party with TDP in the State Assembly. The breakaway faction would submit a letter to Speaker Kodela Siva Prasada Rao to accept their decision in the coming days exactly on the lines of what the TRS did with TTDP in Telangana.

This the party feels will help them in avoiding “unnecessary interference” in governance. The TDP feels that the YSRCP has been a stumbling block and has been opposing every move of the government. It refuses to see the positive side of any scheme or project taken up by the government. It was unfortunate that though Andhra Pradesh occupies first place in the country by achieving 10.99 growth rate it was also sought to be made controversial by the Leader of Opposition.

Chief Minister Chandrababu Naidu had never come across such an opposition leader without having any standards or democratic values, TDP leaders rue. In a democracy, opposition has a very important role to play. Its leader should be a statesman and should know when to support the government and when to pick holes in its governance. But in case of the present opposition party, Jagan finds fault with everything. He is not even in favour of naming Amaravati as the new capital city, TDP leaders allege.

Just as every MLA whether from TDP or Congress has been chanting the development mantra and showing the urge to be part of ‘Bangaru Telangana’ in the new state, the MLAs of YSRCP in Andhra Pradesh are also singing the same tune. “We are unable to take up and complete any developmental project in our constituency. My followers are worried about their political future.

So I have decided to join ruling TDP each one says. Whether it is Bhuma Nagi Reddy, Jyothula Nehru or even Chand Basha who recently joined TDP say they are fed up being in opposition all the time. We need development and already two years have passed. I see no future in YSRCP,” is the explanation they give.

The defected law-makers’ grouse is that the ruling party whether it be in Telangana or Andhra release funds only to ruling party MLAs and refuse to drop a dime to the legislators hailing from opposition parties. The MLAs fear an end to their political career as their poll time promises stay unfulfilled. In many cases, the legislators even expect plum posts either in the cabinet or nominated posts in the corporations. Similarly, the party has also targeted the north coastal region where YSRCP is strong and TDP had taken a beating in the 2014 elections.

But Andhra Pradesh Finance Minister Yanamala Ramakrishnudu described the present exodus of MLAs from the Opposition YSRCP to ruling Telugu Desam Party as a division but not defection and predicted that the day is not far off when the entire YSRCP would split and merge with the TDP displacing Jaganmohan Reddy from the status of Leader of Opposition. Another important leader and Deputy Chief Minister Nimmakayala Chinarajappa said: “MLAs are deserting YSRCP because of the undemocratic and autocratic stance of its leader Jaganmohan Reddy.”

Desertions from YSRCP to TDP have gained momentum as they have been clarified that no whip will be applicable on the members in case of voting in Rajya Sabha elections and the Election Commission has clarified the same. This has helped in giving greater momentum to defections. The YSRCP is poised for total desertions and Jaganmohan Reddy foregoing his opposition leaders' status is a certainty, the AP Finance Minister remarked recently.

It now remains to be seen how effective the “Save Democracy” stir proposed by Y S Jaganmohan Reddy will be. “It will be a cry in wilderness,” says TDP ministers like Pratipati Pulla Rao and Yanamala Ramakrishnudu. But the YSRCP feels that if they succeed in getting support from the national leaders then they will be able to put pressure on the Centre to amend the anti-defection law.

However, political observers say that Operation Akarsh has another angle to it. The TDP, which has started making preparations for the 2019 general election, is not sure whether its alliance with BJP would continue till the next elections or not. On the other hand it is facing problems from a section of Kapu leaders like Mudragadda Padmanabham.

Another problem they have ahead of them is from Pawan Kalyan, who threatens that his party Jana Sena would contest the next elections. If that happens apart from the fan following of Pawan, which mostly consists of youth, there is a possibility of split in Kapu votes. Kapus have been the backbone of the TDP particularly in East and West Godavari districts. So, the TDP is using Operation Akarsh as double-edged strategy to make its party a formidable one before facing 2019 election.