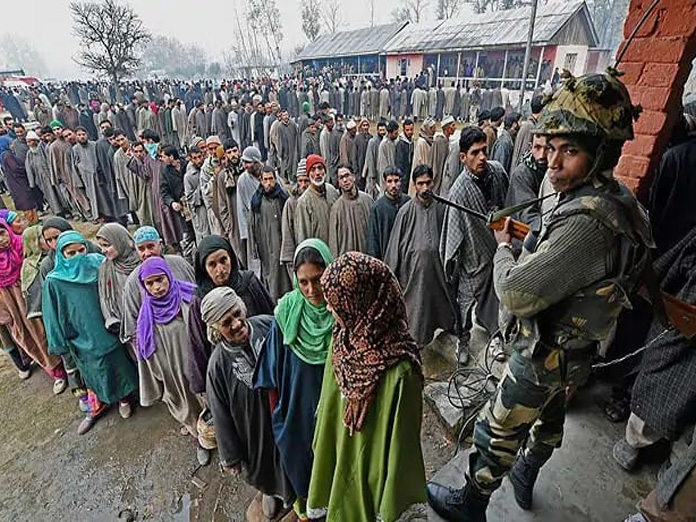 Barring the Bharatiya Janata Party BJP, every other political player seems to want simultaneous Assembly and Lok Sabha elections in Jammu and Kashmir...

Barring the Bharatiya Janata Party (BJP), every other political player seems to want simultaneous Assembly and Lok Sabha elections in Jammu and Kashmir. Regional parties like the National Conference (NC) and Peoples Democratic Party (PDP) have been demanding Assembly election together with the coming Lok Sabha polls to end the political uncertainty in the state.

NC Vice President and former Chief Minister Omar Abdullah has said the real test for Governor Satya Pal Malik and the Centre would be whether the Assembly elections are held with the Lok Sabha battle or not.

The PDP leadership has said that deferring Assembly elections to a later date and holding the Lok Sabha elections on schedule could only be justified to benefit the BJP as security reasons cannot justify the move.

"How can anyone argue that it is safe and possible for the voters to go to the polling stations for Lok Sabha elections and not for Assembly elections? "The only difference between holding the two separately is that instead of two EVMs, there would be only one in the same polling station," said a senior PDP leader.

Although Union Home Minister Rajnath Singh and Governor Malik have said things are in place for holding both the elections together in Jammu and Kashmir, state leaders of the BJP seem to believe that holding them separately would give them an edge.

"How can so many candidates be provided security if these elections are held together? Securing a few Lok Sabha candidates is much easier than providing security to scores of candidates likely to be in the fray for the Assembly election," said a BJP leader who refused to accept that there were political reasons behind his statement.

The Congress strongly believes that any deferment of Assembly elections beyond the Lok Sabha polls would be detrimental to the state's interests. G.A. Mir, President of the state Congress, told IANS: "How can the Governor say the Assembly polls should be deferred when the panchayat and urban local bodies elections were held peacefully and successfully?

"It would be detrimental to the interests of the people of J&K who want Assembly elections held as soon as possible because they have more stakes in the establishment of an elected government in the state rather than who represents them in Parliament. "The real test for the Election Commission would be whether they decide to hold these two elections together or not.

"The Governor is fulfilling the BJP agenda through the back door and that is why the BJP would like to have the Assembly contest deferred as long as possible," a visibly upset Mir added. Jammu and Kashmir is now under President's Rule after the six-month Governor's rule ended after it was imposed in June last year.