Invisibility of gender in Indian agriculture 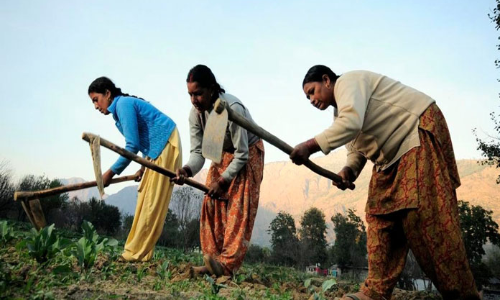 Over 40,000 farmers had gathered in Delhi from across India on November 20, 2018 Fortyyearold Chandravati from Ghazipur district, Uttar Pradesh, left three of her daughters and a son back in her village to participate in the Kisan Mukti March at the Ram Lila Maidan, forgoing a Rs 120 per day wage rate Accompanied by her husband and neighbour Manju 35, she, along with 40 other women from her

Over 40,000 farmers had gathered in Delhi from across India on November 20, 2018. Forty-year-old Chandravati from Ghazipur district, Uttar Pradesh, left three of her daughters and a son back in her village to participate in the Kisan Mukti March at the Ram Lila Maidan, forgoing a Rs 120 per day wage rate. Accompanied by her husband and neighbour Manju (35), she, along with 40 other women from her village and adjoining districts, joined the peaceful congregation in the anticipation of being heard by those at the helm of policy making.

Just like Chandravati and Manju, Ramrati Devi (70) and Sumitra Devi (55) endured a 30-hour plus journey from Masauri village in Patna, Bihar. Their demands were simple: to obtain a fair compensation for the paddy crop that got spoilt in 2018, so as to sustain livelihoods.Around 80,000 farmers are marching from Nashik to Mumbai from February 20 to February 27 in continuance to their demands from last year.

According to the National Crime Records Bureau, farmer protests increased from 628 in 2014 to 4,837 in 2016, making evident the disenchanted and displaced agricultural workforce of the country.While farm pressure groups and protests have been an integral part of Indian history owing to deep-rooted structural problems of colonial extraction; manipulative cropping patterns; corporatisation of agriculture; and low investments; recent farmer protests have seen a historical trend emerging — that of, participation of the female labourer, the woman farmer, the farm widow, and the consequent visibility of the hitherto invisible ‘gendered’ problem in agriculture.

The recent trend of recognising the most vulnerable among farming communities, is also in consonance with the recognition of the landless labourer in schemes such as the Odisha government’s Kalia Yojana.Globally more than 400 million women engage in farm work, although they lack equal rights in land ownership in more than 90 countries. Women worldwide engage in non-mechanised farm occupations that include sowing, winnowing, harvesting, and other forms of labour-intensive processes such as rice transplantation.

According to Oxfam (2013), around 80 per cent of farm work is undertaken by women in India. However, they own only 13 per cent of the land. Recent statistics released by the University of Maryland and the National Council of Applied Economic Research (NCAER, 2018) state that women constitute over 42 per cent of the agricultural labour force in India but own less than two per cent of farmland.Women in agriculture are affected by issues of recognition and in the absence of land rights, female agricultural labourers, farm widows, and tenant farmers are left bereft of recognition as farmers, and the consequent entitlements.

The root of the problem begins at the official lack of recognition of the female agricultural worker, and the resultant exclusion from rights and entitlements, such as institutional credit, pension, irrigation sources, etc. According to the India Human Development Survey (IHDS, 2018), 83 per cent of agricultural land in the country is inherited by male members of the family and less than two per cent by their female counterparts.In the absence of any recognition, women such as Chandravati, Manju, Ramrati Devi, and Sumitra Devi are left out of entitlements related to access to rural credit, assets, technology, irrigation, and inputs.

In 2011, M S Swaminathan, Rajya Sabha member (2007-13) proposed the ‘Women Farmers Entitlement Bill’, which lapsed in 2013. With increasing recognition being given to the contribution of women in agriculture such as by commemorating the ‘Rashtriya Mahila Kisan Divas’, it is time that such legislations and institutional reform in agriculture are addressed.According to the general recommendation # 34 of the United Nations (UN) Committee on the Elimination of Discrimination against Women (CEDAW, 2014) on the rights of rural women, ‘land rights discrimination is a violation of human rights.

In the past, several steps have been introduced in this regard, proper implementation of which has remained tardy.The Hindu Succession Amendment Act (2005) granted coparcenary rights to daughters and equal inheritance rights. The draft of the National Women’s Policy (2016), prepared by the Union Ministry of Women and Child Development recognised the importance of land rights for women.However, issues related to tenure security, and most importantly, the chasm between land ‘ownership, accessibility to entitlements, and control,’ are important challenges affecting the economic empowerment of women in agriculture.

One example here is that of proxy sarpanches or ‘sarpanchpatis,’ where the control is often vested with the husband of the elected woman representative under the aegis of Panchayati Raj Act (1993). According to Bina Aggarwal (1993), a number of factors constrain women in exercising their legal rights including patrilocal post-marital residence, village exogamy, opposition to mobility from men, traditionally institutionalised gender roles, low female literacy and awareness, male dominance in administrative, judicial, and other public decision-making bodies at all levels.

It should be noted that low awareness about women’s right to land aggravates the magnitude of the problem. Additionally, reluctance of women to avoid any conflict with male members of the family and relatives are other factors that inhibit accessibility to agricultural land to women.
Aggravating the issues further is the improper maintenance of land records, poor management of data, and limited digitisation of land records, which affect implementation of agricultural schemes meant to uplift farmers in general, as such challenges make identification of beneficiaries difficult.

For instance, some of these challenges have been pointed out in fairly implementing the Pradhan Mantri Kisan Samman Nidhi Yojana, announced in Budget 2019.Sainath (2014) once quoted, ‘suicide is not about the dead, it is about the living’. Since the advent of liberalisation, more than 300,000 farmers have committed suicide to escape vicious poverty, debt, and humiliation over the past twenty years.

In Maharashtra alone, according to reported statistics (BBC, 2014), there are more than 53,000 farm widows. Out of these, around 10,600 live in Vidarbha, the farmer suicide capital of the country.Recently, a survey conducted by the Mahila Kisan Adhikar Manch (MAKAAM, 2018) of 505 women farmers (whose husbands committed suicide due to farm crisis) in 11 districts across Marathwada and Vidarbha, found that 40 per cent of women widowed by farmer suicides between 2012 and 2018, were yet to obtain rights of the farmland they cultivated.

Among them, only 35 per cent had secured the rights to their family house. The survey also found that 33 per cent women didn’t know they were entitled to a pension, which makes it evident how women have been excluded from accessing institutional rights and entitlements, in the absence of them being recognised as farmers.According to the Food and Agricultural Organization (FAO, 2011), empowering women through land and ownership rights has the potential of raising total agricultural output in developing countries by 2.5 to 4 per cent and can reduce hunger across the world by 12-17 per cent.

The Sustainable Development Goal (SDG #5. a.1), seeks to grant property rights and tenure security of agricultural land to women. Policy paralysis in granting entitlements to women in agriculture and farm widows needs to be addressed to empower rural women economically, politically, socially, and psychologically.The most critical issue that needs to be addressed toward a gendered friendly policy is to minimise the gulf between ownership versus control of land by addressing patriarchal conventions and bottlenecks in interpersonal legislations, to achieve economic equality in gender, as also guaranteed by the Indian Constitution, under the aegis of Article 14.

(Courtesy: Down to Earth. The writer is s a social sector consultant who has worked as Prime Minister's Rural Development Fellow in Seoni district of Madhya Pradesh)