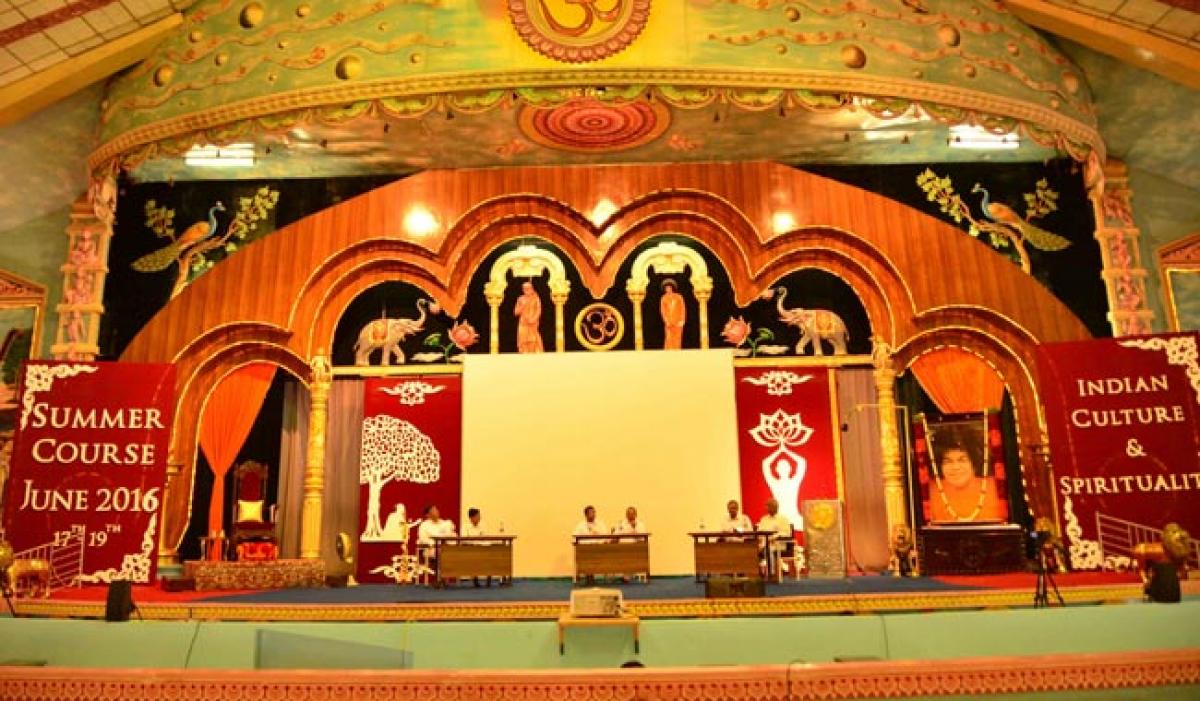 The second day of the Summer Course in Indian Culture & Spirituality, after the invocatory Vedam Chanting, started with a session on Living with God is True Education.

Prasanthi Nilayam: The second day of the Summer Course in Indian Culture & Spirituality, after the invocatory Vedam Chanting, started with a session on Living with God is True Education. Teachers and scholars recollected the beautiful memories and lessons learnt at the feet of Bhagawan Baba when he blessed a drama Bhaja Govindam to be enacted ten times during various occasions. These included the fact that feelings are more important than the paraphernalia, Swami did not select the qualified, He qualified the selected and Sai's philosophy is not about running away from the world. It is about discovering the immanence of the Creator in the world.

A presentation on Bhaja Govindam by students of Muddenahalli, Anantapur and Brindavan Campuses; and Sri Sathya Sai Higher Secondary School (Boys) then highlighted life lessons such as Man is born to learn, not to be born again, Nothing lasts forever, Realize your true inner reality & identity, Enjoy every moment and the The only way to be desireless, is to desire for GOD.

The last session before lunch was a talk on the Mind and its Mysteries by H H Sri Sri Sri Jayendra Puri Mahaswamiji, Sri Kailash Ashram Mahasamsthana and Sri Raja Rajeshwari Devasthana, Bangalore. Swamiji highlighted that thinking, unlike taking action, requires no effort. Thoughts are free, they keep on coming like waves in the ocean. He told students that worry arrests over 99% of the world and that most of us are privy to some sort of fear, such as that of disease, old age, intelligence, etc. and that the only notion that doesn’t have fear is the notion of vairāgya (dispassionate renunciation). He said that the mind is the cause of both bondage and liberation. The world appears to catch us but it is we who are caught and bound ourselves. He concluded by saying that If we make up ours minds, we can change anything in the world. The mind has to regulate the food that goes into the senses.

During the evening session in Sai Kulwant Hall, two students elaborated on insights on the Srimad Bhagavatam and on Love, the spiritual element of Indian culture. They touched upon on the process of transformation by using analogies from the scriptures and Bhagawan Baba’s teachings. The first student elaborated on Ekagrata bhakti or single-pointed devotion and how it leads to detachment and the notion of how God the formless takes a form as an Avatar. The second student spoke on how to evoke pure love for the divine. He said that the three attributes of this love as supposed to worldly love are that it is selfless, assuaging and invigorating.

The second day of the event concluded at 6:30 p.m. with devotional songs, bhajans followed by Prasadam distribution.