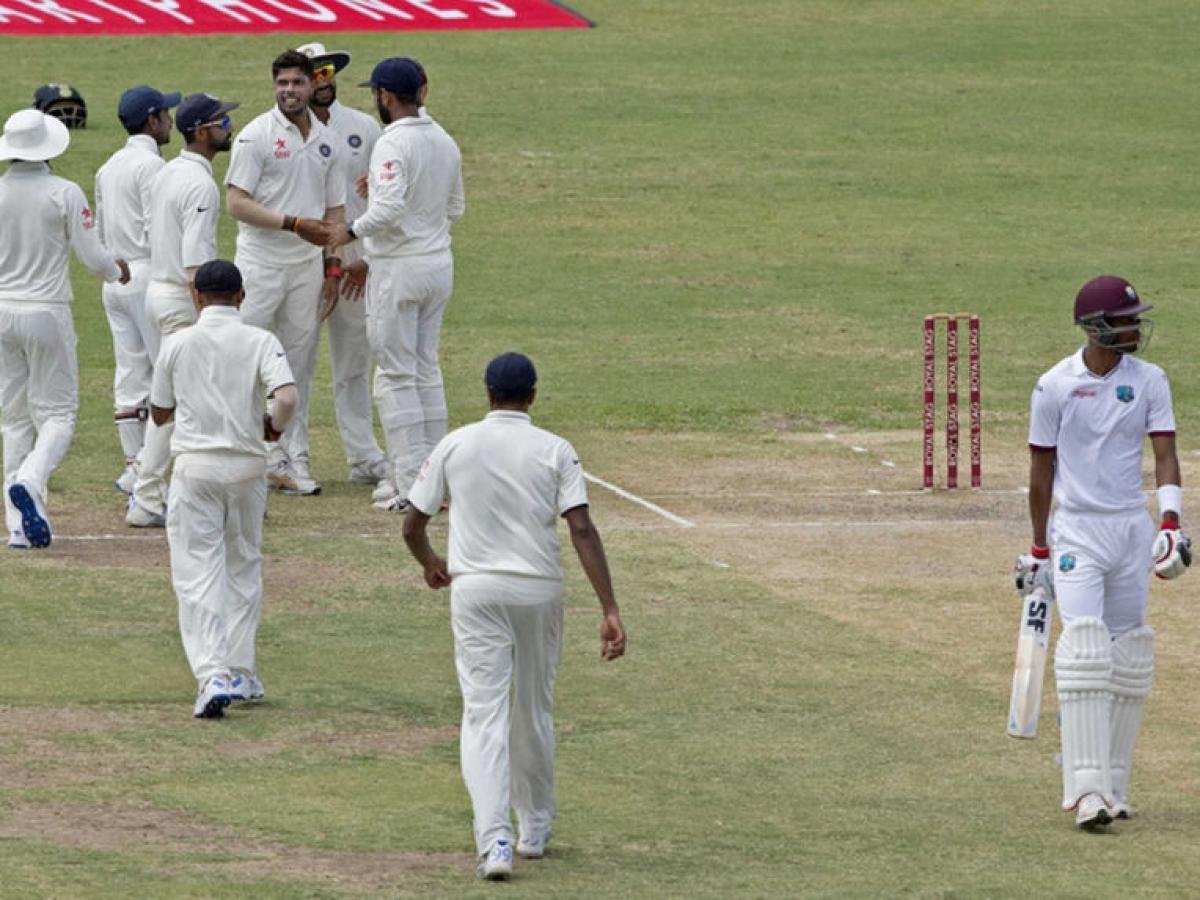 Chase miscued an attempted pull to give Kohli a simple catch at short midwicket and Brathwaite could not get out of the way of a sharp lifter to give a catch behind.

West Indies were facing the prospect of another huge series-opening defeat at 21 for one in their second innings at stumps, a deficit of 302 runs, after being forced to follow-on on the third day of the first Test against India on Saturday.

Fast-medium bowlers Umesh Yadav and Mohammed Shami took four wickets each to wreck the home side's first innings, dismissing them for 243 in the final session of the day with half-centuries by opener Kraigg Brathwaite and wicketkeeper-batsman Shane Dowrich representing the only meaningful resistance.

Brathwaite, who defied India’s array of pace and spin for almost five hours in getting to 74, could not survive the first over of the second turn at the crease, being trapped palpably leg-before by Ishant Sharma.

Rajendra Chandrika and Darren Bravo survived to the close and will resume on the fourth day hoping to put up a much more concerted effort than in the first innings.

In their previous three Test series, the West Indies lost the opening matches at home to Australia by nine wickets a year ago and then by an innings in Sri Lanka and Australia at the end of 2015.

India's bowlers made a mockery of all the lamentations of a placid, lifeless pitch over the first two days with an impressive, purposeful effort throughout the day.
They were held up though at the start of play as Braithwaite and nightwatchman Devendra Bishoo frustrated Virat Kohli and his men for 75 minutes until leg-spinner Amit Mishra had Bishoo stumped by wicketkeeper Wriddhiman Saha.

It was second of six dismissals for Saha in the innings, putting him alongside Syed Kirmani and Mahendra Singh Dhoni for the most dismissals by an Indian wicketkeeper in a Test innings.

From that point on it became a virtual procession of West Indies batsmen to and from the wicket with Shami outstanding either side of the lunch interval when he disposed of Bravo, Marlon Samuels and Jermaine Blackwood to add to his dismissal of Chandrika late on the second evening.

Debutant Roston Chase displayed a measure of grit in a 47-run stand for the sixth wicket with Brathwaite, but the reintroduction of Yadav for another spell in mid-afternoon proved telling.

Chase miscued an attempted pull to give Kohli a simple catch at short midwicket and Brathwaite could not get out of the way of a sharp lifter to give a catch behind.

Dowrich counter-attacked superbly in getting to an unbeaten 57 with ten fours by the time the innings folded, Yadav dispensing with Jason Holder and Carlos Brathwaite off successive balls before Mishra completed the job by bowling a heaving Shannon Gabriel.