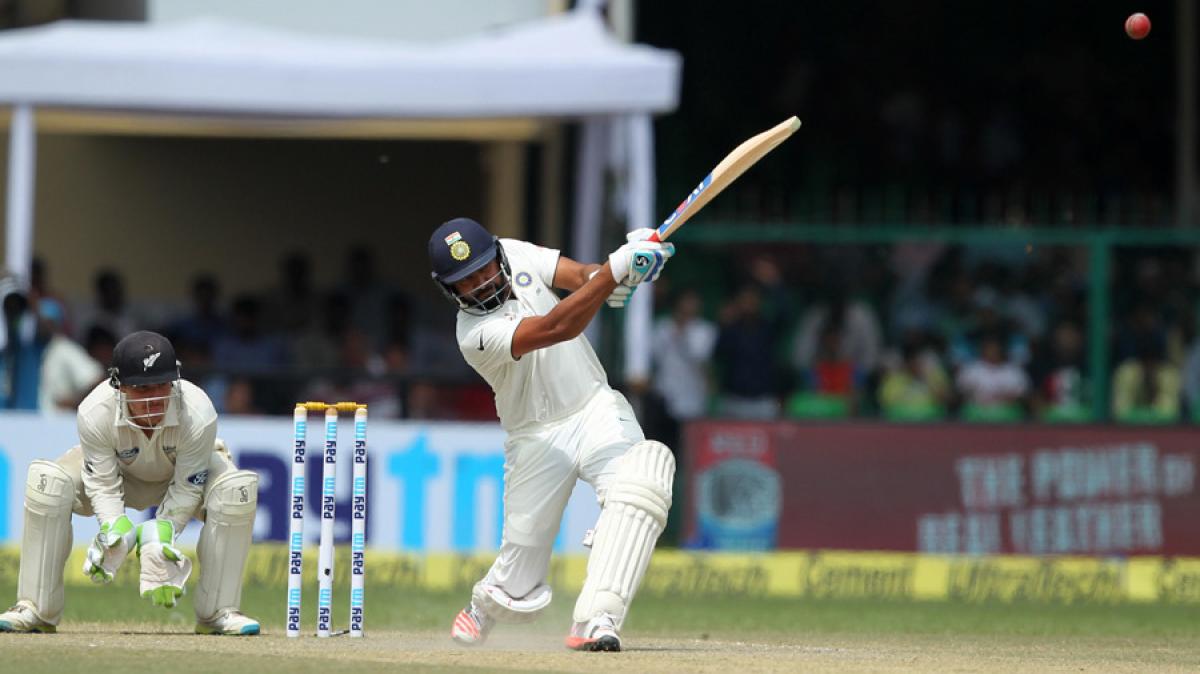 After losing three wickets in the opening session, India also lost Ajinkya Rahane (40) but Rohit (68 not out) and Jadeja (50 not out) ensured that the hosts did not suffer any more reversal after that.

They raised an unconquered 100-run stand for the sixth wicket and the moment Jadeja got a single off Mitchell Santner to get to his half-century, Indian captain Virat Kohli declared and umpires called the tea break.

Jadeja celebrated his milestone by wielding his bat like a sword before the two batsmen walked off the field.

New Zealand now have a humongous task to save the Test as they need to bat four sessions to avoid defeat. No team has ever successfully chased such a target in Test history.

Rohit and Jadeja played in contrasting fashion with the left-hander being more aggressive even as they scored 125 runs in the second session after Rahane was trapped by Santner.

Rohit's 68 came off 93 balls with eight boundaries while Jadeja entertained the Sunday crowd with two fours and three sixes in his 58-ball stay.

The hosts lost three wickets, including captain Virat Kohli, in the morning session but took their lead past the 300-run mark by adding 93 runs to the overnight total of 159 for one.

Except for two overs, New Zealand skipper Kane Willamson had his spinners operating from both ends and each one of the three delivered a wicket apiece.

Vijay and Pujara batted for about 10 overs together before left-arm spinner Mitchell Santner broke the 133-stand between them by trapping the former.

Vijay played for turn, but missed the ball, which struck his pad before hitting the outside edge of his bat. He could add only 12 runs to his overnight total.
(REOPENS DEL 33)

Kohli walked in to a boisterous welcome by the crowd and pulled a short one from Ish Sodhi to mid-wicket boundary.

The New Zealand spinners managed to turn a few balls, creating some doubts in the minds of the Indian batsmen.

Kohli and Pujara played on merit of the balls and found occasional boundaries. It was not easy to find quick boundaries.

Off-break bowler Mark Craig ensured that Kohli does not stay for long at the crease. The home captain attempted a sweep but just managed a top edge that flew to deep mid-wicket where Sodhi took the catch.

Kane Williamson persisted with Santner and Craig for some time before bringing back Sodhi. The leg-break bowler ended Pujara's stay at the crease by having him caught at slips.

The ball pitched outside leg, Pujara tried to defend but it turned sharply, took an edge and went straight to Ross Taylor, who took a low catch.

Craig troubled Rahane a lot and almost had him caught in space of three balls but he survived. One chance went abegging in leg slip and the other at the short midwicket.

However Rahane was comfortable against Sodhi, driving him nicely on the front foot. Rohit smashed Sodhi for a four and took India's lead to 300-run mark with a single off Craig.

15 minutes before the lunch break, Williamson handed the ball for the first time to paceman Neil Wagner but the Indian batsmen saw him and others through to the lunch.