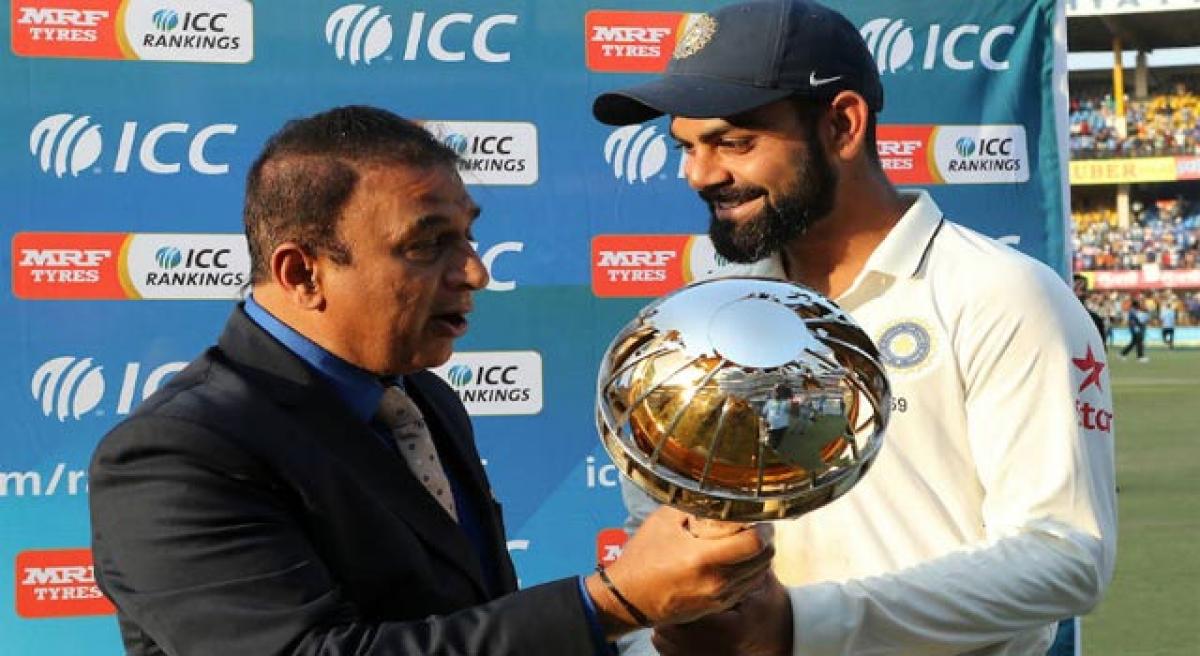 India captain Virat Kohli was on Tuesday presented with the prestigious International Cricket Council\'s Test Championship mace for leading his team to the top of the MRF Tyres ICC Test Team Rankings.

​Indore: India captain Virat Kohli was on Tuesday presented with the prestigious International Cricket Council's Test Championship mace for leading his team to the top of the MRF Tyres ICC Test Team Rankings. The mace was presented by ICC Cricket Hall of Famer Sunil Gavaskar at a ceremony following the conclusion of the third and final Test against New Zealand here.

India was guaranteed number-one spot after it took a 2-0 lead in Kolkata. Since the Test team rankings are only updated at the end of the series, India formally replaced Pakistan at the end of the Indore Test, which it won by a mammoth 321 runs. “It’s an honour and a moment of great pride to receive the ICC Test Championship mace. To be recognised as the best in the traditional form of the game is as good as it gets for any team and stuff that dreams are made of,” Kohli said.

Kohli has become only the second India captain after Mahendra Singh Dhoni and 10th overall to receive the mace, even though it is for the third time since Kohli took over as captain that India has led the rankings table. India had topped the rankings very briefly in January-February this year as well as in August. India’s longest stint at the number-one position was from November 2009 to August 2011 under Dhoni.

The other captains to have received the mace are Steve Waugh, Ricky Ponting, Michael Clarke, Steve Smith (all Australia), Andrew Strauss (England), Graeme Smith, Hashim Amla (both South Africa) and Misbah-ul-Haq (Pakistan). Kohli credited his players for performing consistently to take the team to the top.

“Individual performances are important, but in the end it is what those performances do for the team that matter. I would like to thank all players and support staff. To reach the top of the Test rankings takes a lot of hard work and perseverance,” he said, while adding that playing Test cricket every cricketer’s ambition and to be part of such a team is to be treasured.

ICC Chief Executive David Richardson praised India for regaining the top ranking within weeks of losing it to Pakistan. “The number-one ranking has changed hands three times in as many months, indicative of the current competitiveness of Test cricket at the highest level, which is great for players and fans,” Richardson said.

Gavaskar said such an accomplishment will be cherished for years to come. “I have always believed that Test cricket tests you in every way. To come out on top over a period of time and be acknowledged as the best in this format is a big achievement. There may be three formats of the game now but every cricketer knows that the challenge that Test cricket presents is much more and calls for a different set of skills, grit and character,” he said.

The mace, valued at 30, 000 pounds when was introduced in 2001, has been produced by the then British Crown Jeweller, Asprey & Garrard, in 2001. It was commissioned to make a distinctive prize designed to stand out from other cricket trophies. It sits on a wooden base with a silver-plated plaque in front with room for engravings of the sides to hold it.