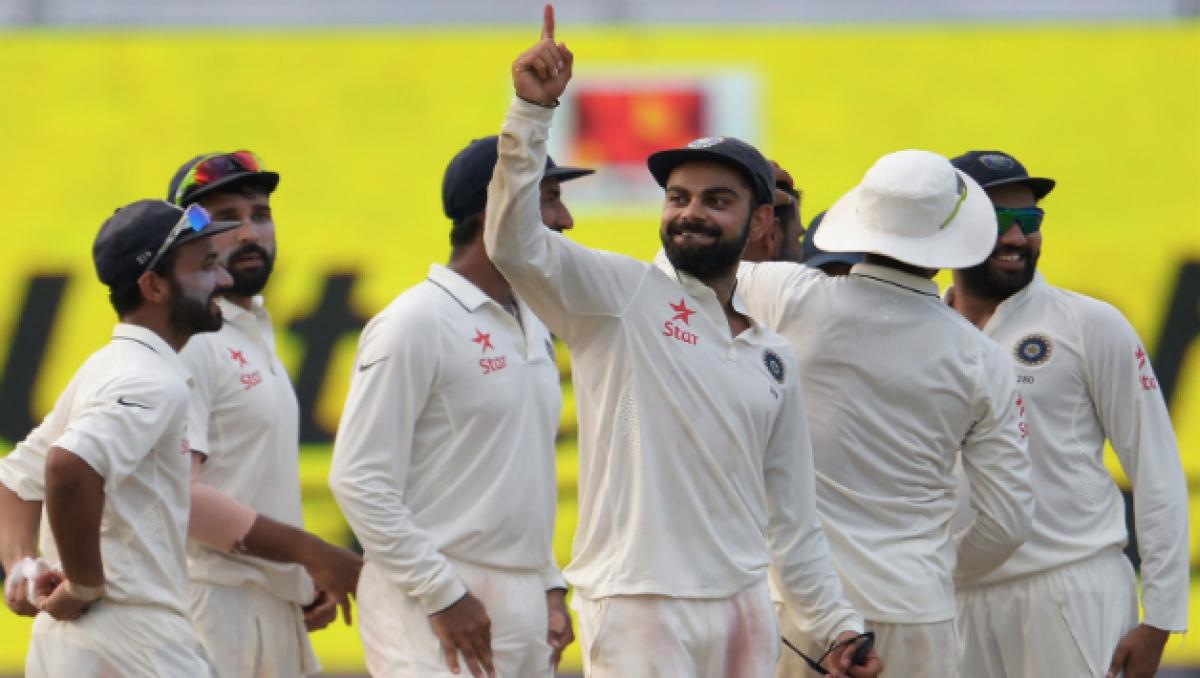 Cricket will provide the ravaged city some succour and the Indian team an opportunity to record its biggest-ever series victory against England when the two sides lock horns in the fifth and final Test starting here on Friday.

Chennai: Cricket will provide the ravaged city some succour and the Indian team an opportunity to record its biggest-ever series victory against England when the two sides lock horns in the fifth and final Test starting here on Friday.

The match will also be a chance for the Indians to stretch their unbeaten run to a record 18 matches.

The southern metropolis has been ravaged by Cyclone Vardah that left in its wake, large-scale destruction. The catastrophe did not spare the iconic Cheapauk either, but the square and the outfield have not been damaged.

In their quest to get the venue ready in time, the ground staff were yesterday seen using burning coal to dry the pitch to be used for the match, which was rendered inconsequential after India wrapped up the series with a convincing win in Mumbai.

Training was cancelled yesterday owing to a wet ground, despite the stadium boasting of one of the best drainage systems in the country.

India are leading the five-match series 3-0 and should they taste success in the final Test, it will be their biggest against England, the previous being the 3-0 whitewash in 1992-93 under Mohammed Azharuddin's captaincy.

It will be a sweet revenge for the twin defeats, including a 4-0 drubbing in 2011, which India suffered at the hands of England in the last two series between the two nations.

Having clinched the rubber, skipper Virat Kohli has asserted that India would now "really express ourselves fully" and hope to make it 4-0 against opponents who are looking bruised and battered.

Kohli has been in the form of his life, having become the first Indian to notch up three double centuries in a calendar year. Entering the game on the back of a monumental 235 in Mumbai, Kohli is in no mood to relax and is expected to pile more misery on the beleaguered English outfit.

The 28-year-old, who is among just five batsmen, including Don Bradman and Ricky Ponting, to amass three double-centuries in a single year, is 135 short of bettering

Sunil Gavaskar's (774 runs) record of most runs by an Indian in a single series.

Undoubtedly, Kohli will once again be the cynosure of all eyes at Chepauk, which is hosting a Test after a gap of three years during which time India have risen to number one in the ICC rankings.

While Kohli loves to lead from the front, he has in his arsenal an array of players who can produce match-winning performances, be it with the willow or the ball. Right from the top to bottom, the team looks balanced and full of infectious energy.

Murali Vijay has established himself as a dependable opener and has already slammed two centuries in the ongoing series.

The Chennai lad's opening partner, the young and extremely talented KL Rahul, is always on the lookout for runs, though he could not make it big in Mumbai after missing the third Test in Mohali.

Cheteshwar Pujara has been solid at the crucial number three position and would look to make it count after failing to capitalise on the start in the last game.

Doing duty in the absence of first-choice wicketkeeper Wriddhiman Saha, Parthiv Patel has not done too badly either after making a comeback after eight years.

Ravichandran Ashwin has been enjoying a phenomenal run and the off-spinner, with 247 wickets, is on the verge of becoming the fastest to reach 250 scalps in Tests, ahead of Australian pace legend Dennis Lillee, who got there in 48.

Ashwin already has 27 wickets in this series, way ahead of Adil Rashid of England, who has 22. He is comfortably placed as the best in the world at the moment, and the local boy is more than average with the bat.

Ravindra Jadeja has been a perfect foil to Ashwin, often providing the key breakthroughs, his sharp left-arm spin leaving the Englishmen in a bind. He too is no bunny with the bat, clearly showing the all-round strength of the team.

The young Jayant Yadav impressed by becoming the first Indian number nine batsman to score a century during his huge partnership with Kohli last week.

In the absence of Mohammed Shami, Bhuvneshwar Kumar and Umesh Yadav will fill in the fast bowling department.

Post the catastrophe, the city will look to Kohli's men to bring some cheer to fans. Even as Chennai showed tremendous fighting abilities, the visiting England team can take a cue from the city's resilience to score a consolation win at the venue where they have scored their highest Test total in India till date - 652 for seven declared in January 1985.

With questions being raised over his future as captain, Alastair Cook will be keen to turn around what has so far been a winter of discontent and restore some pride before they go into the Christmas break.

Both the teams are unlikely to get a feel of the ground before the real action kicks off.