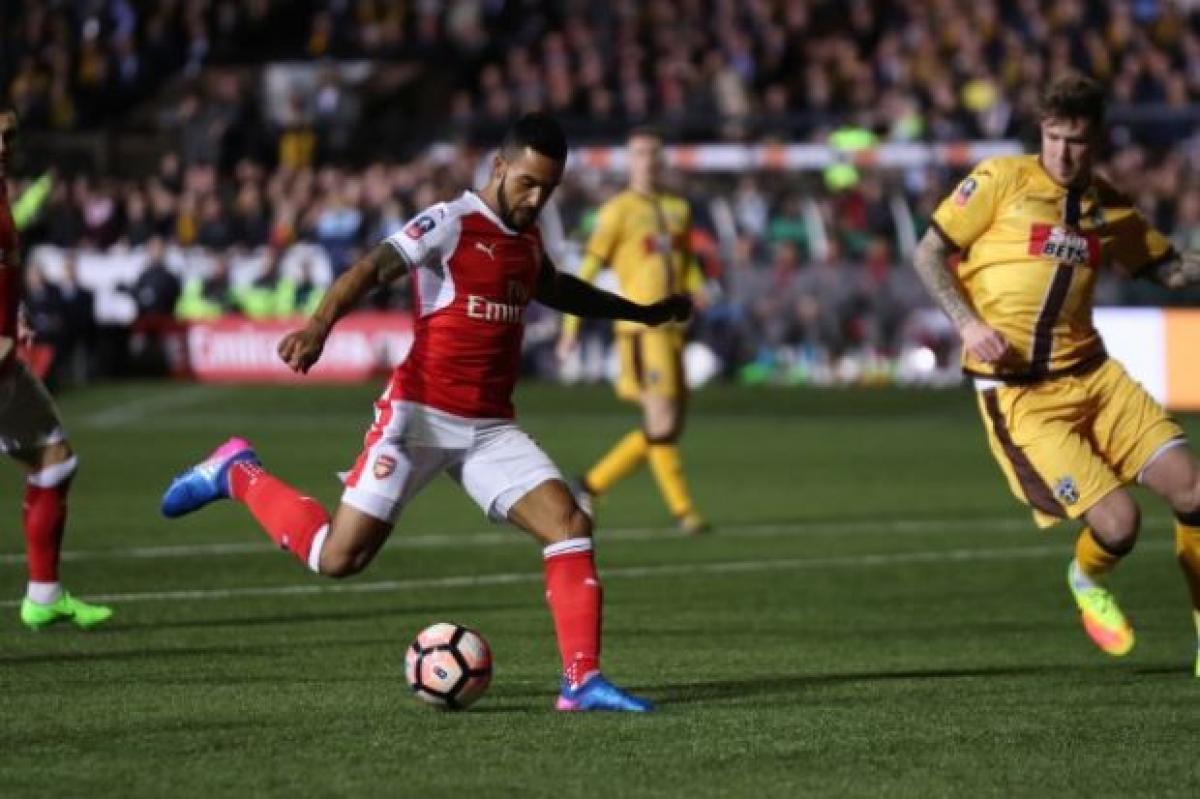 Sutton United\'s FA Cup fairytale ended as Arsenal forward Theo Walcott scored his 100th goal for the club in a 2-0 fifth round victory on a surreal night at Gander Green Lane on Monday.

Sutton United's FA Cup fairytale ended as Arsenal forward Theo Walcott scored his 100th goal for the club in a 2-0 fifth round victory on a surreal night at Gander Green Lane on Monday.

England forward Walcott added to Lucas Perez's 26th minute effort shortly after the break as the 12-times winners avoided what would have been one of the competition's greatest shocks.

The 5,000 capacity crowd wedged into the Borough Sports Ground in south London for the biggest night in the club's humble 119-year history were even treated to a 15-minute cameo by Arsenal's Alexis Sanchez on the glistening artificial pitch.

Sutton, 17th in the fifth-tier, 105 places lower down the English football ladder than Arsenal, could be proud of their effort in matching their famous visitors.

They will bank about 700,000 pounds ($872,410.00) for a fairytale Cup run that included a famous victory over former FA Cup winners Leeds United in round four.

"It was a dream to watch my team play against Arsenal. The quality of the team they put out showed what's at stake," said Sutton manager Paul Doswell, who works for nothing and loaned the club 450,000 pounds interest free for its 3G pitch.

"I'm very, very proud. This was our cup final and these players will go down in history at the end of the day."

Arsenal will play Sutton's National League rivals Lincoln City in the quarter-finals after they became the first minor league side for 103 years to reach the last eight by beating Premier League side Burnley away on Saturday.

"They were organised and had a huge desire. If we were not mentally prepared we would not have gone through today," said Arsenal boss Arsene Wenger, who made seven changes to the side that lost 5-1 at Bayern Munich in the Champions League last week.

"I didn't really enjoy tonight because we absolutely had to do the job and it is tricky."

The match was not a classic and, after a big build-up in the media, never really looked like producing a footballing miracle.

But it created memories galore.

There was the streaker who interrupted play in the first half sporting a rubber giraffe's head. There was the sight of children scaling the scaffolding housing the BBC TV cameras, straining for a view of Arsenal's superstars.

And there was Sutton's rotund reserve keeper Wayne Shaw munching on a pie in the closing stages.

Hundreds of fans had gathered outside the Plough pub awaiting the arrival of the Arsenal team coach which rolled in little more than an hour before kickoff.

Inside, the smell of fried onions and hot dogs wafted across the plastic pitch being liberally watered.

Sutton went about their business diligently, hustling and hurrying Arsenal's thoroughbreds in the first half.

They even ventured forward on occasion with Roarie Deacon and Craig Eastmond, who both once played for Arsenal, keen to make the most of their chance to shine.

Arsenal went ahead when Granit Xhaka fed Lucas wide on the right and he cut inside before skimming a low left-foot shot that gathered pace off the plastic turf and beat the belated dive of Ross Worner who was distracted by Walcott.

Arsenal keeper David Ospina almost gifted Sutton an equaliser with a stray clearance just before halftime but Adam May sliced wide from a promising position.

With Alex Oxlade-Chamberlain on as a substitute, Arsenal gave themselves some breathing space 10 minutes after the break when Walcott turned in Nacho Monreal's cross after a fine move.

However, Sutton would not be overwhelmed and deserved a goal, none more so than the livewire Deacon who rattled the crossbar with a 25 metre thunderbolt.

The only sour note was some scuffling on the Gander Green Lane pitch following the final whistle after some of Sutton's fans inexplicably tried to break the crossbar.