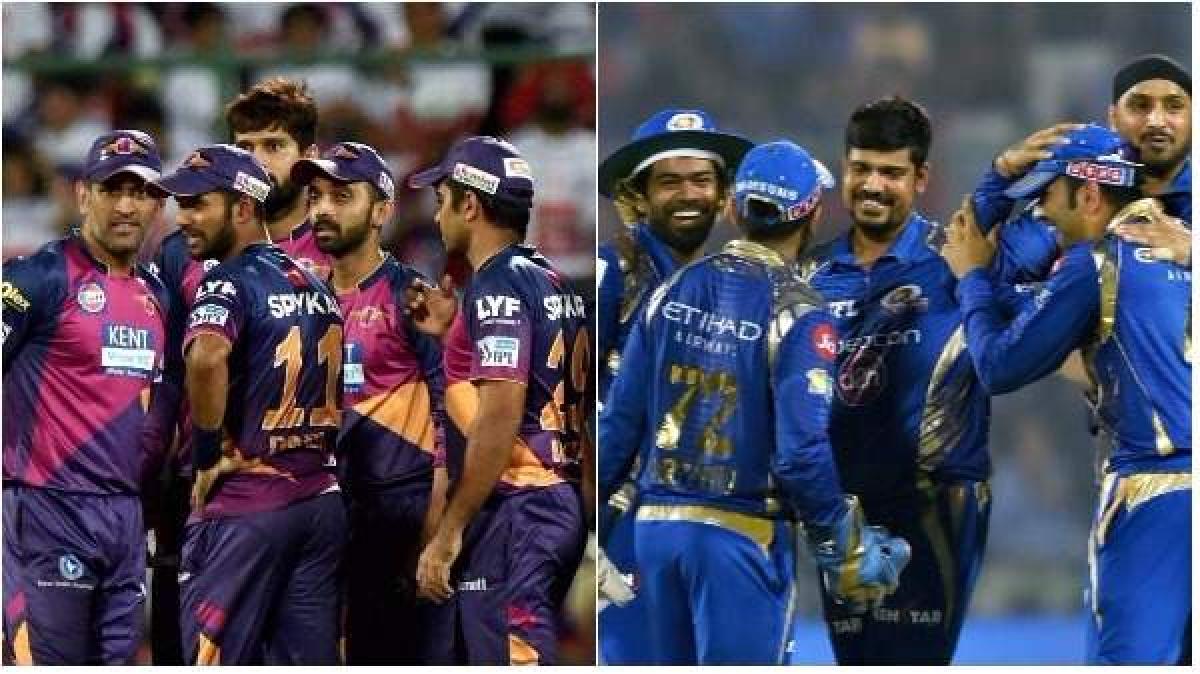 Aiming to complete a hat-trick of titles, the formidable Mumbai Indians will face an imposing challenge from the Rising Pune Supergiant in what promises to be a riveting \'Grand Finale\' of the 10th Indian Premier League, here tomorrow.

Aiming to complete a hat-trick of titles, the formidable Mumbai Indians will face an imposing challenge from the Rising Pune Supergiant in what promises to be a riveting 'Grand Finale' of the 10th Indian Premier League, here tomorrow.

Billed as a 'Maharashtra Derby', the summit clash is set to be a bit more than an inter-city battle with huge reputations of big stars at stake.

Even on paper, there is not much to choose, especially with Pune beating MI thrice this season including a comprehensive victory in Qualifier 1. But final is a new day and MI can always be fourth time lucky.

Two-time champions Mumbai will be playing their fourth final and should have been termed as clear favourites had it not been for a certain Mahendra Singh Dhoni, who will be playing a record seventh IPL final.

Some of the MI stars, like skipper Rohit Sharma, Kieron Pollard, Harbhajan Singh and Ambati Rayudu, have a fair idea of how to win a mega final as they have been a part of the victorious 2013 and 2015 sides.

MI's strength has been their bench with like for like replacements. When Jos Buttler left, they had Lendl Simmons to fill up for him. Similarly, Mitchell McClenaghan (19 wickets) can cool his heels with Mitchell Johnson tormenting the batsmen.

Nitish Rana (333 runs) has been one of the finds but when Ambati Rayudu came back from injury, he was equally effective.

Harbhajan Singh has been economical as ever but the team management had faith in leg-spinner Karn Sharma who crushed the KKR batting during the second Qualifier. In Malinga and Bumrah -- they have the best death bowlers in the business.

Pollard hits big and is a livewire on the field.

Pandya brothers -- Krunal and Hardik -- provide the all- round balance and above all there is Rohit, who can singlehandedly turn the match on its head.

But when it comes to 'MSD', the cash-rich league has been his playground since its inception in 2008.

The former India captain knows more than a thing or two about IPL finals. Pune skipper Steve Smith will be banking on Dhoni's experience with an aim to emulate Shane Warne, Adam Gilchrist, David Warner -- the Aussies who have lifted the silverware.

In terms of performance, Dhoni hasn't exactly set the stage on fire but his contribution in two of the victories have had a telling impact.

The tricky chase against Sunrisers Hyderabad during a league game was one match in which Supergiant witnessed the 'Master Finisher' come to the fore. It was a match Pune needed to win in order to get some momentum going.

And then the five sixes off the last two overs during the Qualifier 1 at Wankhede -- a match that was till then in MI's grip.

It's highly likely that Dhoni will be seen in his favourite 'Canary Yellow' jersey from next season as Supergiant won't be getting an extension as per current rules.

But the legend must not have forgotten how he was unceremoniously removed from captaincy and a memorable knock in the final will only be an icing on the cake.

After a forgettable last season, Pune, under Smith, have found their combination this time round.

Ben Stokes has been one of those rare players, who has justified the big bucks (Rs 14.5 crore) spent on him by Sanjeev Goenka.

Before leaving for Madrid (where England is having a pre Champions Trophy camp), Stokes' 316 runs and 12 wickets had a huge role to play in ensuring a smooth passage to the play- offs.

The century against Gujarat Lions, while battling cramps, and brilliant overs at the death made it easier for Smith.

The emergence of Rahul Tripathi (388 runs) -- son of an Army Major -- who had for sometime quit cricket while staying in Kashmir, has been one of the most endearing IPL stories of this year.

Not to forget the reticent Washington Sundar, who held his own bowling in Powerplays, to some of the best T20 exponents.

Skipper Smith (421) also had a good start before some quiet matches towards the business end. Manoj Tiwary (317) has also played his part to perfection.

The best part about their campaign has been turning their weak-links into a strong point.

Once Imran Tahir (18 wickets) left for national duty, no one would have thought that Jaydev Unadkat (22 wickets) would make this platform his own with support from the unheralded Washington and Shardul Thakur.