FIFA World Cup 2018: Head-to-head matchups that could decide the final 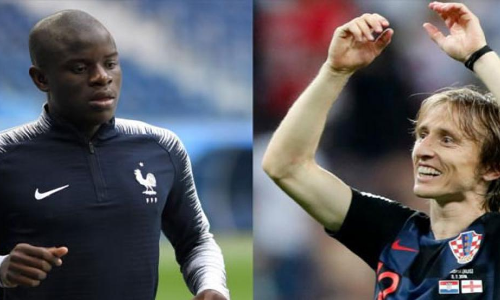 While the glorious FIFA World Cup 2018 final is said to be a battle between Croatias dogged experience and Frances youthful power, here are the key headtohead matchups that could decide Sundays World Cup final between the two nations

Teenager Mbappe is already established as one of the players of the tournament with his raw pace causing big problems for opposing defences.

Moscow: While the glorious FIFA World Cup 2018 final is said to be a battle between Croatia's dogged experience and France's youthful power, here are the key head-to-head matchups that could decide Sunday’s World Cup final between the two nations.

While the fluid nature of the modern game ensures there are rarely exclusive head-to-head battles in the midfield, there is little doubt the performances of Modric and Kante will be key to the destination of the World Cup.

Modric, technically gifted and rich in big match experience after winning four Champions League titles in five seasons at Real Madrid, is the beating heart of the Croatia team and can be elusive as he prompts, probes and switches the line of attack.

Apparently indefatigable, Modric plays a full role in the defensive effort and has the ability to suddenly pull a defence-splitting pass out of the bag at a key moment.

When Kante plays well, France play well is a saying with much currency largely because of the holding midfielder’s ability to snuff out danger in the space in front of the back four.

His distribution skills also help in the rapid transition from defence to attack that make France such a threat on the break, and he sometimes has an eye for goal himself, often popping up with a raking shot from the edge of the box.

Teenager Mbappe is already established as one of the players of the tournament with his raw pace causing huge problems for opposing defences from the start of France’s campaign.

His two goals against Argentina in the round of 16 illustrated that he has a sublime touch to go with his blinding speed and although he has not found the net since, no defender is going to enjoy an evening trying to contain him.

Lovren and Domagoj Vida have formed a rock-solid central defensive partnership for Croatia during the run to the final, encapsulating the backs-to-the-wall attitude of their resilient side.

They were exposed early in the semi-final by the pace of Raheem Sterling, however, and in Mbappe they face a player with a considerably better record of delivering the final product than the England forward.

Perisic was Man of the Match in the semi-final against England after scoring Croatia’s equaliser and then providing the assist with a looping header for Mario Mandzukic’s winner.

A player who thrives on confidence, the Inter Milan wingback tormented England’s Kyle Walker in the second half after he had been given licence to push forward down the left flank.

Pavard came into the French side at the start of the tournament as a replacement for the injured Djibril Sidibe and has played well enough to maintain his position even though the incumbent right back has regained fitness.

His magnificent half-volleyed strike in the last 16 match against Argentina was his most high-profile contribution to the run to the final but more important, perhaps, was his part in keeping the likes of Belgium’s Eden Hazard quiet.