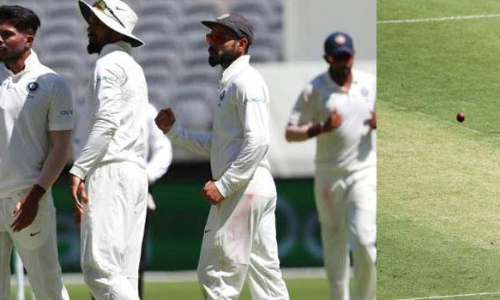 Perth:Australia posted 145/3 at tea on the opening day of the second cricket Test against India here on Friday.

At the break, Shaun Marsh (8 batting) and Peter Handscomb (4 batting) were at the crease.

All the three wickets fell in the post lunch session with Fast bowlers Jasprit Bumrah, Umesh Yadav and part time spinner Hanuma Vihari bagging one each.

Openers Marcus Harris and Aaron Finch gave the hosts a steady start. Batting comfortably on a pitch which did not have too much bounce despite some green cover, they frustrated the all-pace Indian attack with a 112-run stand.

Harris scored 70 runs off 141 deliveries with 10 hits to the fence. Finch stroked six boundaries on his way to 50 off 105 balls.

Australian captain Tim Paine saw his decision to bat first upon winning the toss being vindicated as the opening pair batted comfortably throughout the session.

A couple of leg before appeals against Finch and a minor run out scare against Harris were the only times the batsmen were somewhat troubled.

Forced to go in with an all pace attack due to a minor injury to star off-spinner Ravichandran Ashwin, the Indian bowlers seemed a bit jaded after their exertions in the last match.

Both Jasprit Bumrah and Mohammed Shami were down on pace and struggled at times to maintain line and length.

The Indians managed to claw their way back into the game after lunch.

Bumrah gave India the first breakthrough after resumption by trapping Finch leg before with an excellent delivery which kept low and seamed in sharply.

Usman Khawaja batted 38 balls for just five runs before virtually gifting away his wicket to Umesh Ydav with a rather forgettable stroke.