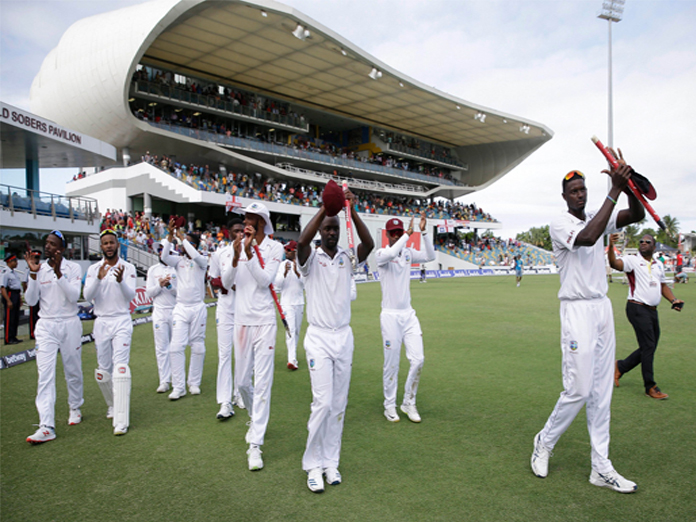 Bridgetown (Barbados): Roston Chase proved the unlikely bowling hero as the off-spinner destroyed England with career-best figures of eight for 60 as the West Indies crushed the visitors by 381 runs to win the first Test at Kensington Oval on Saturday.

Set the improbable target of 628 to win, the tourists slid to ignominious defeat in bright sunshine on the fourth day, losing their last six wickets for 31 runs either side of the tea interval to be dismissed for 246, ending a winning streak of five matches.

It was the largest margin of victory by the West Indies on home soil and third largest anywhere in their 91 years as a Test-playing nation.
Chase made the most of a fourth day pitch showing more signs of wear but also benefited from poor shot selection by an England side that looked shell-shocked from the events of the previous two days when they were routed for just 77 in their first innings.

They then saw the West Indies mass 415 for six declared in the second innings with captain Jason Holder starring with an unbeaten double-century and wicketkeeper-batsman Shane Dowrich contributing 116 not out in an unbroken seventh-wicket partnership of 295.

It was left to stand-in wicketkeeper Shai Hope to complete the dismissal which sealed the result, stumping Sam Curran down the leg-side off Chase 40 minutes into the final session.

“To come back the way we have as a team and for me personally after the last few months is really satisfying,” said Holder after victory was formalised.

“This is just the first Test of three and there is a lot of work to be done. Achieving consistency continues to be the key.”

Given England’s dominance of Sri Lanka and their spinners in sub-continental conditions less than two months earlier, the manner of their capitulation would have been particularly surprising.

Not that it mattered in the least to Chase who reaped considerable reward to eclipse his previous best Test innings figures of five for 121 against India in Jamaica in just his second Test in 2016.

If West Indies expectations in the victory push on the fourth morning were that pace would replicate the devastation of the first innings, the lanky 26-year-old changed the narrative when he ended opening batsman Rory Burns' quest for a maiden Test century off the final delivery before lunch.

Burns top-scored for England with 84. Enjoying the conditions and England’s indecisiveness, he added the wickets of England skipper Joe Root, Ben Stokes and Moeen Ali, the off-spinning all-rounder suffering the indignity of a "pair" in the afternoon to end the tourists' hopes of taking the match into a fifth day.

Fast bowler Shannon Gabriel, who would have had the wicket of Root but was called for a no-ball when the batsman gloved a sharp lifter to Holder in the slips, made amends by dismissing Jonny Bairstow to a leg-side catch by Hope.

Another pacer, Alzarri Joseph, had taken the first wicket of the day when he broke an opening partnership of 85 by having Keaton Jennings caught by Holder at third slip for 14.