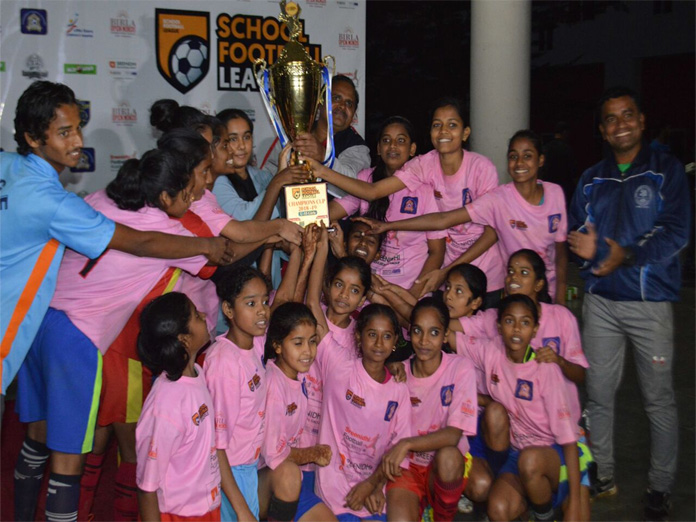 Pudami Karvy and Karwan Govt School emerged Champions at the 2nd Edition of School Football League SFL Girls Final after a daylong battle for the title at Birla Open Minds School in Kollur on SundaySFL was copresented by Hyderabad Football Academy and Kerala Blasters FC, a press release said

Pudami Karvy lifted the Champions Cup in under-13years category by defeating Future Kids by two goals, while Karwan Government School defeated Aga Khan Academy-1 in under-15 final. In both the finals, the winning side scored two goals each leaving thier their opponents goalless.

Pudami Government and Aga Khan Academy-2 won the Players Shield in under 13 and 15 years age categories respectively. Open Minds teams gave a tough fight, but lost in both the categories. In under-13, they lost to Pudami 3-1 in a penalty shoot out and in under 15years they lost to Aga Khan 2-0.

Under 13years category: Venya of Open Minds, Muskan of Pudami Government School, Jahnavi of Pudami Karvy, Akshaya of Future Kids School, Yashna of Rockwell Intl School and Shifa of Aga Khan Academy were honoured with the Star Player of the Team titles.

In under 15 years age category: Inika of Open Minds, Yana of Future Kids School, Sanvi of Rockwell, Mehak of Aga Khan-1, Afreen of Aga Khan 2 and Pavani of Karwan Government Schools were adjudged as the Star Player of the respective teams.

Yeffa of Aga Khan was crowned as the Player of the Tournament in under-13, Swathi of Pudami Karvy—Top Scorer and Nandini of Open Minds honoured with Golden Glove.

Under 15 years age category: Imsha of Aga Khan was named the Player of the Tournament, Shalini of Karwan Top Scorer and Reha of Future Kids was presented Golden Glove.

It was an eleven-side-football game. This format, according to organisers, tested players to their limits on their physical, mental and tactical aspects of the game. With each half 30 minutes, it was an hour game.

Varuni Jaiswal, Junior International Table Tennis Champion, was the chief guest and gave away the prizes.

Addressing the gathering Varuni described it as a very unique event. Football is a rough game. It is admirable to see these determined young girls playing like boys.

“Girls must play sports and you must have guts to face failures. Then only you will emerge as Champion,” VarunI told 150plus young girl footballers. “What was so surprising about School Football Leagues was bringing Government and Private School Girls on the same level and made to compete with each other,” she added.

“Young girls played matches all through the day defying rain. Neither rain nor cold weather could stop them from playing their matches. It shows their determination,” said Ananth Tejo—Director of Hyderabad Football Academy.

Atif Hyder, Director of Hyderabad Football Academy said that over 100 matches resulted in these teams finally coming together to compete for the Championships.

“Each of these teams had played five to six matches in the league level over the last two months to reach the final. The top two teams competed for Champion’s Trophy, the next two for Premier Cup and subsequent two for Player’s Shield,” said Himanshu Charan, Director of School Football League.

“SFL is designed so well keeping in mind a comprehensive match experience for the players. Girls’ matches are held only in two categories - under 13, 15 - boys additionally have under 18years category. As many as 50 School Teams, both boys and girls competed in this long journey,” said Ananth Tejo.

“SFL is one of its kind tournament. A dedicated league that too for Football, which is considered as a poor man’s sport and above all in league format is hard to find,” Ananth Tejo added

Ananth Tejo, said: “Boys football is common. But, Girls Football is not so common. Surprisingly there’s a rising number of girls playing football and schools are also encouraging them especially in the twin cities these days.

More so, the government school girls are taking active participation and giving a tough fight to the private and international schools.

SFL is a good indication for this growing trend that girls too can play football. Being a contact sport, it is tough but a wonderful character and confidence building opportunity for our girls.”

“There are more opportunities now than ever before for girls to get involved with the football game at school level,” added Atif Hyder.

“SFL was born to provide a high-quality competitive tournament experience to young players. The idea is to build and engage communities through Football and reignite the passion for football to put Hyderabad back on the national map. It is also our endeavor to nurture a generation of players and fans who will carry India into FIFA WC 2026,” said Himanshu Charan.

The boys' semi-finals and finals are scheduled on February 9 and 10 at Sreenidhi International School in Aziz Nagar.