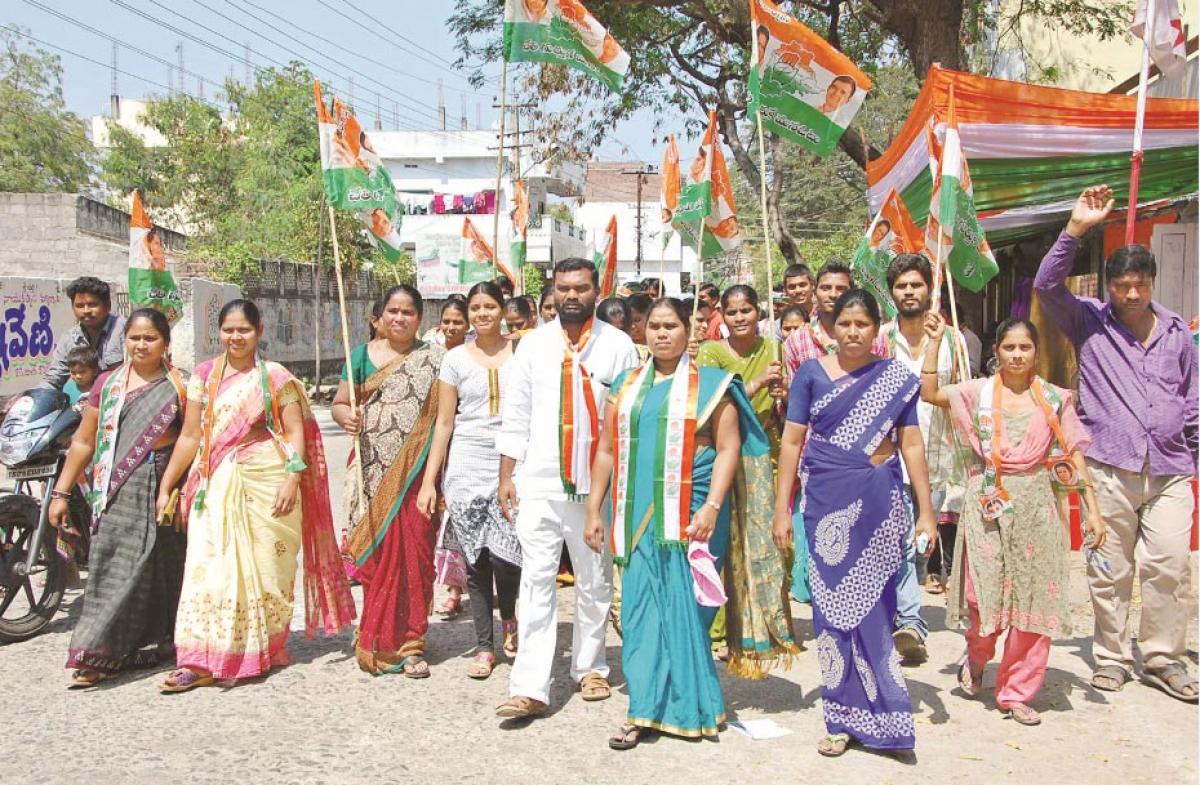 The aspirants, who were expecting ticket from various political parties and those, who want to try their luck by contesting in Khammam Municipal Corporation elections, have launched their campaign by visiting each house in their divisions in Khammam city. The Communist Party of India (Marxist) is leading in campaigning for the Corporation elections followed by Congress, YSR Congress and TDP.

Khammam: The aspirants, who were expecting ticket from various political parties and those, who want to try their luck by contesting in Khammam Municipal Corporation elections, have launched their campaign by visiting each house in their divisions in Khammam city. The Communist Party of India (Marxist) is leading in campaigning for the Corporation elections followed by Congress, YSR Congress and TDP.

Led by district secretary Pothineni Sudharshan Rao, the CPM had already launched padayatra in every division two month ago, finding out the public problems and assuring that the CPM would fight against the government on the issues until they were solved. By declaring some of the candidates well before the release of elections notification and with the clean record of giving better ruling during the tenure of former councillors Chirravuri Lakshminarsaiah and Sameena Afroz, the party is racing ahead in election campaign.

After the results of Greater Hyderabad Municipal Corporation elections and the visit of Chief Minister K Chandrashekar Rao to Khammam, there was a rapid momentum in the ruling TRS. Many senior leaders and former councillors from other parties have joined the ruling party expecting ticket. Roads and Buildings Minister Tummala Nageshwar Rao held a meeting with some of the senior leaders at the party office here on Monday to choose the best candidate who can win the elections.

It was Congress which started election campaign first compared to other parties in the town. Local MLA Puvvada Ajay Kumar took the responsibility along with MLC Ponguleti Sudhakar Reddy and TPCC working president Mallu Bhatti Vikramarka, had declared the division president long before and started campaigning in the divisions elevating the local problems and fighting to solve them. But, the Congress is still afraid Operation Akarsh as many of its leaders joining the ruling party.

Above all, it received a major blow on Monday with Ponnam Venkateshwarlu of Congress joining the TRS in the presence of R&B Minister T Nageshwar Rao. On the other hand, the TDP has lost its past glory with former MLC Potla Nageshwar Rao and many other leaders at division level leaving the party and with a great disaster in GHMC elections. It also lost its cadre in the district and now seeking the support of other parties to contest in the elections.

TDP state leader Nama Nageshwar Rao, Sattupalli MLA Sandra Venkat Veeraiah and district unit president Tulluri Brahamiah were busily searching for a suitable candidate to contest in the elections. YSR Congress has declared 15 candidates officially as soon as the notification issued on Sunday and is preparing the final list with another 35 candidates to be declared very soon.

Many aspirants joined the YSRCP after Telangana state president and MP Ponguleti Srinivas Reddy announced that the party will bear the election expenditure. MP Ponguleti Srinivas Reddy along with the district president and Pinapaka MLA Payam Venkateshwarlu were busy scrutinising the candidates to field them in all 50 divisions to leave their mark on Khammam Municipal Corporation.