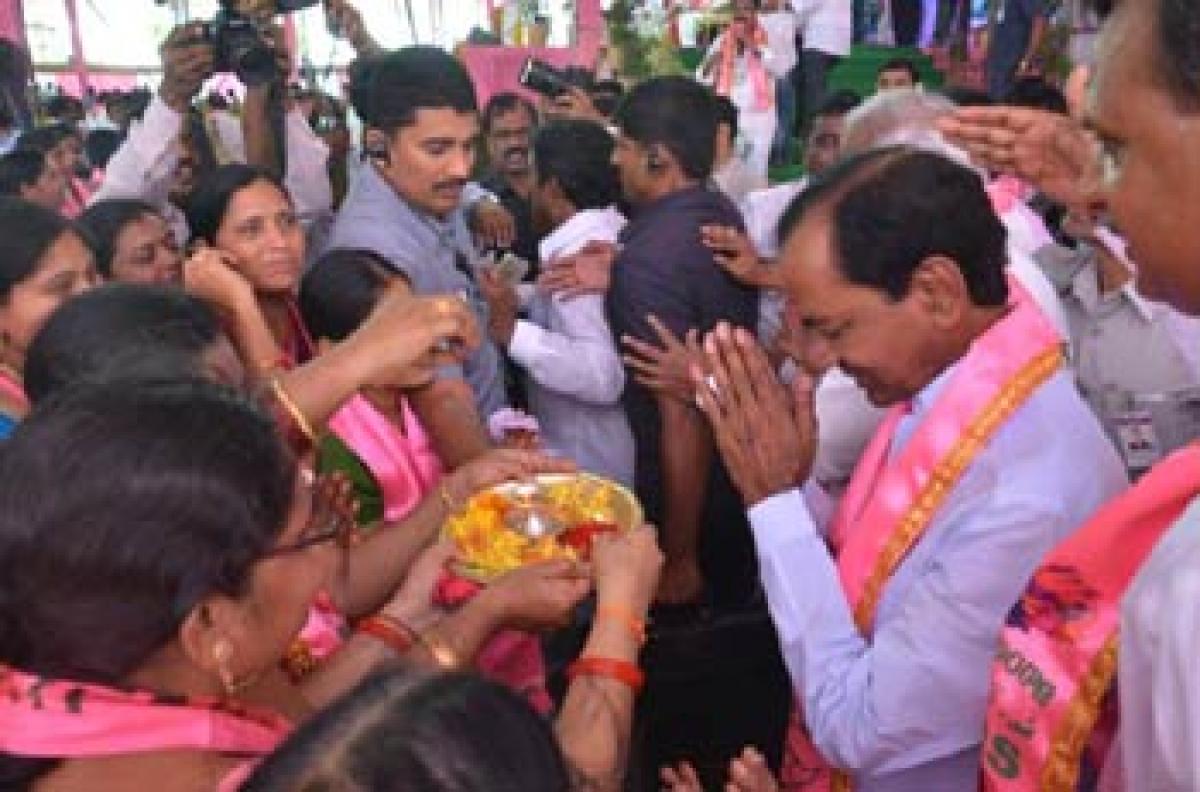 Chief Minister K Chandrashekar Rao on Wednesday said the well-being of all religions and castes would mean “Bangaru Telangana.”  The Chief Minister was speaking in the 15th plenary of TRS in Khammam on Wednesday.

KCR promised to fill all the 4,000-and-odd nominated posts in next 15 to 20 days. Asking the party activists to be patient and wait for their turn, KCR said that it took 13 years for him to become a Minister. ''I did not feel dejected. The Minister’s post came searching for me. Seasoned politician should wait for his/her turn. Party is like a tree and one should not chop it down,'' said the Chief Minister.

He further said there would be more opportunities for the leaders as 34 new Assembly constituencies and 10 council seats would be added to the existing ones as per AP Reorganisation Act and added that there were positive signals from Delhi in this regard.

He cautioned the party leaders not to allow arrogance to come in them because of victories in the elections. He said people would admire those who worked for the welfare of the State and punish those who shirked their responsibilities, he said.

KCR said that the successive victories of TRS were the result of welfare measures being implemented by the government. ''Entire country is surprised how TRS was getting this much support. Even Prime Minister Narendra Modi said the TRS was doing a great job and people were appreciating the government,'' said KCR.

The Chief Minister said the TRS government was now fulfilling 100 per cent of its election promises. Stating that the government gave approval for 150 Gurukul schools for Scheduled Castes and Scheduled Tribess and 70 residential schools for minorities, The KG-to-PG scheme would begin this academic year. He said many schemes, which were not in the party manifesto, were also being implemented.

He promised to ensure that every inch of land is provided with water in Khammam. Once Bhakta Ram Das and Sita Rama project were completed, additional irrigation facility would come to the district. Referring to the transfer of the district Collector by the Election Commissioner, KCR said the TRS reposed faith in the electorate.

Elections would be won with the support of the people and not by using the official machinery, he asserted The Chief Minister made special mention about Mission Kakatiya and Mission Bhagiratha, the Chief Ministers of other states and the Union Ministers had been appreciating the schemes. He reiterated that TRS would not seek votes if it failed to provide water to every household in the State.

Stating that the TRS workers were like “Apara Bhageeratha,” he asked them to work for completing the works by 2017 end. The TRS government, he said, by ensuring that there was no power cuts gave the lie to the predictions made by the adversaries. The opponents predicted “darkness” if the Telangana State was carved out of the united Andhra Pradesh.

But the efforts by the government made the adversaries “shut their mouths,” he pointed out. KCR reiterated the promise that the government would construct 2.6 lakh double bedroom houses for the poor. The Chief Minister said that soon there would be training classes for the party activists.

TRS secretary general K Keshava Rao stressed the need to reinvent Telangana and the responsibility rested on the party activists. Around 4,000 delegates attended the two-day plenary.