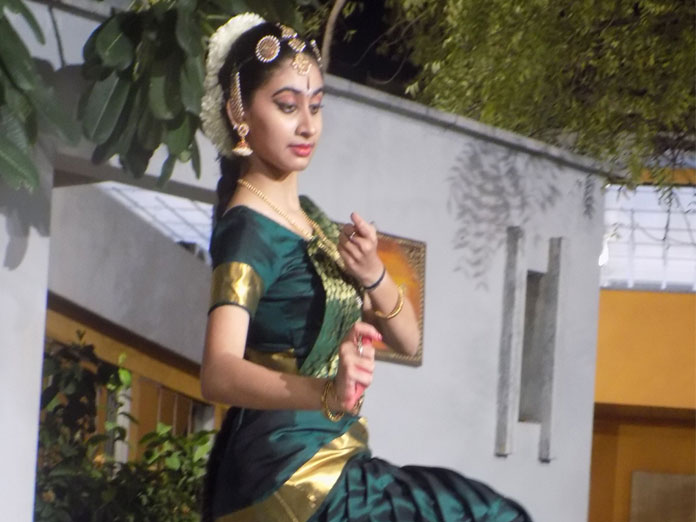 Saptaparni and NatyaSwara jointly organised a program on SaturdayFeatured during the dance recitals were Kuchipudi performance by Aapeksha, student of DrYashoda Thakore and Bharatanatyam by Sahitya Ramkumar, student of Ramalinga Sastry The opening Koutvam was choreographed by Sindhuja and remaining items in Kuchipudi were by DrYashoda Thakore

Saptaparni and NatyaSwara jointly organised a program on Saturday.Featured during the dance recitals were Kuchipudi performance by Aapeksha, student of DrYashoda Thakore and Bharatanatyam by Sahitya Ramkumar, student of Ramalinga Sastry. The opening Koutvam was choreographed by Sindhuja and remaining items in Kuchipudi were by DrYashoda Thakore.

Prayer to Lord Ganesha was sprightly enacted by Aapeksha in this traditional invocation to followed by the second item ' Maa Janaki ', a Thyagarajaswamykeertana narrated by Sita’s friend, who is telling the story of Ramayana. She tells Lord Rama that it is because Sita has taken his hand, that he is a great King. he item begins with the episode of Sita’s swayamvaram containing aptly depicted Abhinaya.

The Bhavani BhujangaStotram written by Adi ShankaraCharya is set in Ragamalika.The item speaks about the many facets of Goddess Bhavani, as the Lady who sits in the Trikonam, the all-powerful being. It speaks about her varied beauty. The devotee says that just one glance at her beautiful face removes all miseries and that she is bestowed of all boons and that the devotee knows no other than her.

The Padavarnam was a conversation between the devotee and LordRanganathaswamy.The devotee asks, why the lord is holding a grudge against him. He questions him, saying ‘all my life you have been with me, why is that you are turning away now. He asks lord Rangayya if he is a burden for the lord to carry? ‘If you think I will let you walk away from me like this, then you are mistaken, he tells the lord –‘you the ruler of the world, I have been telling you this, why won’t you listen to me? You saved Draupadi from her perils as you save everyone, and I know nothing other than you. The item is set in NatakuranjiRagam.The song has been composed by Kuppuswamy Iyer. Then came a brisk ending with Hamsa Nandi Tillana.

Bharatanatyam program by Sahitya began with a crisp Kouthuvam on TamizhkadavulMurugan in ShanmukhapriyaRagam. Shadaksharakouthuvam is beautiful composition by Madurai R Krishnan describing Karthikeya’s valour.The show then took off with 'GunmanaKarayadire in Thilang.PurandaraDasa’s layered lyrics depict Krishna giving many adorable reasons why Yashoda should not call the Demon. This piece was in Kannada.This was followed by of a change of emotion, a javali in Telugu written by PatthabhiRamayya that reflects the distressed heroine who asks her hero about all the false promises he gave.

This composition in Purvikalyani was a comic representation of the Heroine’s sarcasm.Sahitya excelled in this as she did in the next one 'Ramo Nama babuva', a composition in the mother of all languages, Sanskrit. One of the classic shlokas of Bilva Mangala depicts the mother narrating Ramayana to put her son to sleep.A soulful and soothing piece in Ragamalika was prelude to the conclusion - 'PurandaraVithala' composition in Bhimplasi. Bhanudasa ‘s lyrics of ultimate surrender in Marathi is moving.Brindavani Venu beautifully done by the artiste is a composition that sets the groove yet stirs the soul.