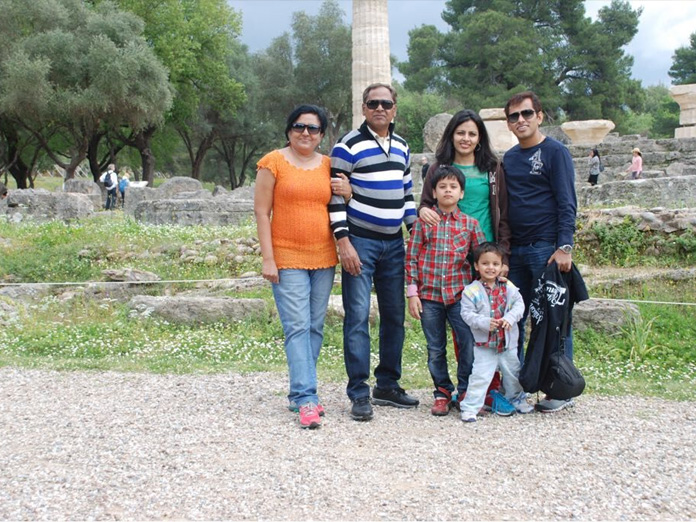 Its no mean featto go around to over 150 countries over a period of 30 years Nomula Narmada Reddy, a resident of Habsiguda in Hyderabad has achieved this distinction by sheer desire to go around the globe to meet a variety of local people During the merrygoround trips mostly accompanied by husband Indra Reddy and other family members, she also visited during the last two years 108 temples ac

It’s no mean feat—to go around to over 150 countries over a period of 30 years. Nomula Narmada Reddy, a resident of Habsiguda in Hyderabad has achieved this distinction by sheer desire to go around the globe to meet a variety of local people. During the merry-go-round trips mostly accompanied by husband Indra Reddy and other family members, she also visited during the last two years 108 temples across the country, where Vishnu Sahasranam is recited.

“I travel at cheapest rates possible. My motive is to always cut down the costs, she stresses while recalling a trip four years ago to eight countries, where she spent the minimum possible amount to travel around locally and took care to cook her food, carrying the daily quota of rice with her.

Narmada also recalls with sheer pleasure her cruise trip across seven nations in May last year, which was inspired by Christopher Columbus, the famous explorer/navigator. The inspiration to visit these countries was to see what the achievements of Columbus were. She brought out a travelogue ’Columbus Adugu jadallo Maa Prayanam’ in November last year.

In June her other book, ‘Aagadu Maa Prayanam’ was released. ‘Wherever I am going I am writing about those places’, she asserts when asked why pen books.

The third book, ‘Yudhakshetramlo Maa Yatra’ is likely to be published soon, inspired by her visits to Kargil, Bhuj. The basic idea is to create interest in readers regarding World War II involving Germany, Japan, and war-prone countries like Egypt, Israel, which she visited.

Narmada is also a keen academic. She completed MA, did LLB and LLM three years ago, post-marriage (she was married when she was doing her Intermediate) as a young mother of two children. She bagged the gold medal in LLB and secured distinction in LLM. Narmada did not stop at that; and got enrolled for PhD, which she hopes to complete next year.

‘I was married during my intermediate. As a pregnant woman I did BA as a private candidate’. Subsequently, as a regular student I completed BEd. Why PhD? ‘I like to study’m she states. Narmada is also active in physical sports. She has been playing shuttle badminton daily for one hour during the morning hours for the last 30 years. She hopes to participate in international event for veterans. Narmada had also participated in running and relay races, besides national badminton events.

‘I also play cards for relaxation. I like social life, mingling with different groups of people. This is the reason why I launched Narmy Foundation (which is inspired by the Army) for the needy people aided by women. Started with 18 eves, it is now left with six. They each collect Rs.1,000 a month to render services to orphans in the twin cities.

Narmada says ‘I educated 22 boys and girls up to degree from school level. One girl now works in Infosys, while another is a doctor. A boy is studying IIT.”

The woman with a never-say-die spirit and always bubbling with energy got suitably rewarded for her laudable efforts in virtually going around the world. She bagged the ‘Woman Achiever Award’ in 2016 and, in 2017 Narmada received an award at South India level from Women and Glory Publication.