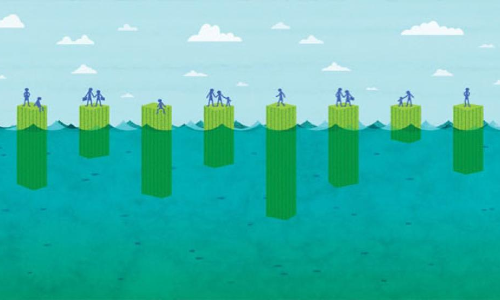 Acharya Vinobhabave once said that, \"one of the best lessons that I have learnt from Gandhi is, not to decide what to be done for the people by myself, rather, to go, meet, talk and get to know what exactly they want.\" Sixty Five years later, ever since the Bhoodan Movement has stated, the Economic Survey of India has depicted somewhat similar line of thought.

Acharya Vinobhabave once said that, "one of the best lessons that I have learnt from Gandhi is, not to decide what to be done for the people by myself, rather, to go, meet, talk and get to know what exactly they want." Sixty Five years later, ever since the Bhoodan Movement has stated, the Economic Survey of India has depicted somewhat similar line of thought.

That is the policy of Universal Basic Income, where the funds will be transferred directly into the bank accounts of the people, by using the tools of JAM, Jandhan Accounts, Aadhar Card and Mobile Phones and enable them to spend as per their most prioritised needs, instead of the government designing various welfare schemes.

The concept of the Universal Basic Income has become popular in the Latin American Countries. Mexico had launched a Scheme called Progresa, in the year 1997, to distribute funds directly to promote Education, Public Health etc. Brazil did the same in 1996 to eradicate child labour.

Probably the left wing ideology of the latin American Governments might have encouraged such policy adoption. However, it hasn't been limited to the communist or strict socialist economies. Several Capitalist States too have adopted the same method of ensuring welfare through Universal Basic Income (nomenclature of the system being different in various countries)
In controlling the leakage of the funds, UBI has been experimented and proven to be a successful method in various countries. As far as controlling and containing poverty is concerned, it was proved to be effective.

The change that happens through UBI might not be compact, but, it would be more effective than spending the same amount of funds on diversified welfare schemes, as it is least vulnerable to the whimsicals of corruption and leakages. As far as controlling and containing the poverty is concerned, the empirical data shows increased number of enrollments in schools and better access to the health care and enhancement in the quality of poor below the poverty line.

The Economic adviser Aravind Subramanyam has stated that grievous misallocation of funds had taken place for the Six major welfare schemes and the rural, sub-urban and semi urban areas of the districts could not get the influx of all the funds and only twenty nine percent of it is reaching. This is not only a ripen situation for the discussion, but also for the action. However, the gradual progress is desired, as there are several concerns and constraints for UBI. If at all the discussion takes place few issues have to be given heightened priority, a few being positive and few other negative.

As and when the huge amount of funds are transferred at a time to the huge chunk of individuals, there is a wide possibility of heavy flow of liquid cash in the market which could hit the growth severely. As long as the funds are directed into the welfare schemes and the people receive the benefits in the form of ultimate goods or services, the liquid flow gets restricted. But, that cannot be the case if funds are directly transferred to people.

However, the immediate implementation had not been guaranteed, it wouldn't be a big blow to the GDP Growth rate predicted at the rate of 6.5% to 7.5% for the current fiscal year 2017-18. However, at the time of implementation, inflation is going to be a serious concern. So, lot of technical efforts a needed to maintain a good balance.

As it was stated by Mr. Aravind Subramanian, that, the UBI fund transfers are not inclusive of the existing welfare schemes, rather, it would be exclusive. In addition to the expenditure over every other welfare scheme the UBI funds have to be transferred.

The NDA Government has been applauded across various intellectual and common fraternities. If the Central Government takes the burden of separately implementing many of the welfare schemes, if instead of integrating them under UBI, the vigor and vibrancy of UBI could get degraded. Therefore, the allocation of funds to separate welfare schemes and integration of schemes under UBI has to be done judiciously.

Presumptions about Alcoholism and Lethargy

The UBI like direct cash transfer schemes had been subjected to severe citisism by certain group of thinkers. They argue that such schemes could encourage people to be lethargic and spend the benefited sum of money on alcohol, as they are in a comfort zone of financial security.

This would jeopardise the high tax payers, if the lump sum of their taxed income is fetching undue comfort to the downtrodden. But, the empirical data of the survey made by the World Bank says something contrary to this.

In a policy research working paper sponsored by World Bank, Cash Transfers and Temptation Goods: A Global Evidence, states that, there is no significant impact of direct cash transfers on consumption of temptation goods or addictives like alcohol, tobacco and drugs.

The researchers David K. Evans and Anna Popova, had carried out the survey in the low and middle income nations of Latin America, Africa and Asia and proved that despite of any impact on addictives, the education, health and other basic amenities of these countries had improved.

As the survey was conducted in the low and middle income countries, the impact in India would be almost nearer to the results of this survey. But, at the same time, Government should also take certain precarious steps like enhancing the quality, quantity and accessibility of alcohol de addiction centres and curtailing the alcoholic flood in the market.

Industrial Revolution 4.0 : From a Futuristic Point of View

Elon Musk the Chairman of Tesla Motors and SpaceX and a donor for GrantCoin an NGO that does wealth distribution to the poorer sections across the world has supported the direct transfer of funds to the people for enhancing the Social security. Due to the inception of Industrial Revolution 4.0, there could be huge displacement of employment.

The modern mechanisation of industries, enhanced artificial intelligence etc could nullify the necessity of the quantum of human resources to an acute level.

At such times, the schemes like UBI could prevent the sense of insecurity among the people. However, still there is a long way to reach certain situation. But, UBI would be inevitable at such times.

If all the challenges are tackled scrupulously, then UBI scheme could be very effective and efficient in eradicating impoverishment. It could even change the entire perspective with which we look at an ''Indian Welfare State''.