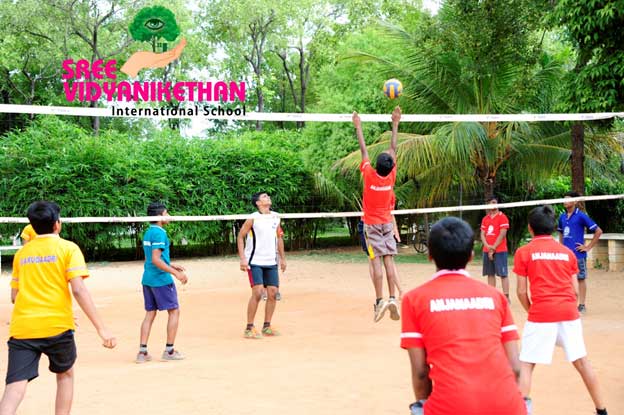 SVIS Tirupati ensures the best environment for students, one of the best schools in Tirupati SVIS as a center for knowledge and academic excellence for people of all nationalities, origin, religious beliefs and social background

Best schools are those that advocate against Corporal Punishment and Tirupati schools stand in forefront in the practice. The best schools in Tirupati focus more on nurturing the children through alternative means than punishing them.

Best definition for Corporal punishment in a school means causing deliberate pain or discomfort as a reaction to undesired behavior by students in schools. Beating with a cane or yardstick, slapping on cheeks, pinching on hands, hitting on limbs etc. Fall into this category. The disciplinary action taken by school staff against the student's misbehavior sometimes takes a violent form such as striking the student across their backs on heads. Some schools use cane, wooden paddle, slipper, leather strap or wooden rulers for it.

Best Schools in Tirupati such as Sree Vidyanikethan are against Corporal Punishment. Earlier Central Board of Secondary Education (CBSE) has been warning the schools many times to eradicate corporal punishment, it seems that despite a ban, some affiliated schools are still practicing the same. Parents' Forum for Meaningful Education filed a petition challenging the legality of corporal punishment in schools as provided for in the Delhi School Education Rules 1973, arguing that it violated the Constitution.

Best milestone in the issue of Corporal Punishment for schools came in the form of Indian Supreme Court ruling in the year 2000. The Petition succeeded and the Supreme court directed the State to ensure "that children are not subjected to corporal punishment in schools and they receive education in an environment of freedom and dignity, free from fear". The judgment came from Court on 1 December 2000.Right to Education (RTE) Act defines corporal punishment as physical or mental harassment and is illegal and liable to punishment under sections 17(1) and 17(2).

Sree Vidyanikethan School in Tirupati does the Best About Recreation

One among the best schools in Tirupati, Sree Vidyanikethan International school was established in 1993 by Padma Shree Awardee, Dr. Manchu Mohan Babu, with a personal deserving students and he became a source of inspiration and guiding spirit to the students' fraternity. SVIS as a center for knowledge and academic excellence for people of all nationalities, origin, religious beliefs and social background. Ensuring the best environment for students, one of the best schools in Tirupati is Sree Vidyanikethan International School.