Mumbai favourite over Super Kings in clash of IPL giants 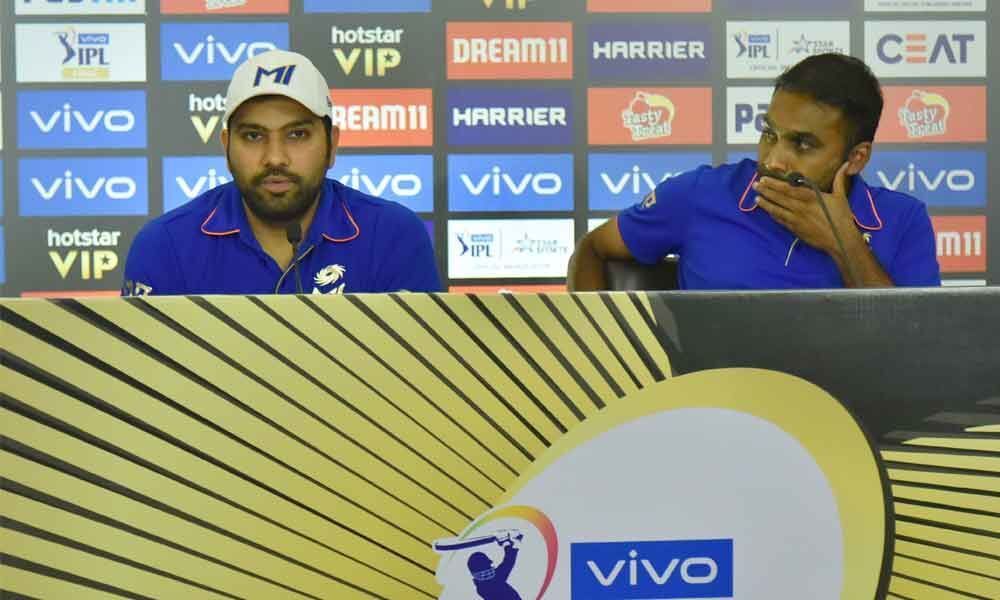 Familiar foes and the two most successful teams of the IPL

Hyderabad : Familiar foes and the two most successful teams of the IPL -- Mumbai Indians and Chennai Super Kings -- clash in a mouth-watering final here on Sunday, following a rather eventful season that produced some unprecedented moments on the field.

It can't be disputed that Mumbai go into the final as the favourites, having beaten CSK as many as three times earlier in the tournament including in the Qualifier 1 at Chennai on Tuesday.

However, statistics count for little going into the title fight with both teams being in the situation before multiple times.

Rohit Sharma-led Mumbai can certainly take confidence out of the fact that they have won three out of the four finals they have been part of, including the two against CSK in 2013 and 2015.

For three-time champions CSK, who have entered their eighth final, it has been another remarkable season after last year when they made a triumphant return having serving a two-year suspension.

Whatever the outcome may be, the final here will add another memorable chapter to their longtime rivalry.

The way the entire season unfolded will also not be forgotten anytime soon by the fans and experts alike.

With World Cup beginning right after the IPL, the league had additional significance for tainted Australian stars -- Steve Smith and David Warner -- who made a successful return after serving out one-year bans for their role in the ball-tampering scandal in South Africa.

Warner especially made a roaring return by amassing 692 runs and formed the most dangerous opening pairing this season alongside Jonny Bairstow.

The left-handed opener, who is back in Australia for the World Cup preparation, is set to end as the tournament's highest run-getter.

For India's very own, Hardik Pandya and K L Rahul, it was also a tournament to remember with both hitting top-gear ahead of the World Cup.

Having served a BCCI suspension for their outrageous comments on women during a TV show, Pandya and Rahul got their act together and proved match-winners for their respective teams.

Pandya is not done yet and expect him to deliver a match-winning performance for Mumbai in the final. He and KKR's Andre Russell elevated power hitting to another level with their sensational strokeplay.

Besides producing plenty of on-field moments to savour, IPL 2019 had its fair share of controversies.

Amongst the ones that stood out involved KXIP skipper Ravichandran Ashwin and talismanic CSK captain Mahendra Singh Dhoni.

Early into the competition, Ashwin triggered a massive 'spirit of cricket' debate in the entire cricketing fraternity by 'Mankading' Jos Buttler who was backing up at the non striker's end. There were some who backed Ashwin's act, while some were against it.

The controversial incident even attracted the attention of MCC, the custodian of game's laws.

Two weeks later, none other than Dhoni's conduct was questioned after he stormed onto the pitch from the dugout to dispute a no-ball call. It was a rare sight of Dhoni losing his cool.

Umpires were at the receiving end again after making some poor calls, raising serious questions over the standard of Indian umpires.

The issue of over-rate too will have to be taken into account while planning for the next season with some of the league games stretching beyond midnight.

Bringing the focus back to the final on Sunday, CSK will have to redraw their plans against Mumbai, who have beaten them convincingly three times this season.

Rohit and Co. have dealt with CSK's spin threat smartly while other teams' batsmen struggled against the experience trio of Imran Tahir, Harbhajan Singh and Ravindra Jadeja.

CSK pacer Deepak Chahar too has been impressive with 19 wickets so far. Going into the Qualifier 2, the lack of runs from Shane Watson's bat was a concern but he regained his touch with a 32-ball 50 against Delhi Capitals.

Mumbai, on the other hand, will be well rested following a four-day break and backing themselves for a fourth win over Dhoni's side this season and fourth IPL title.