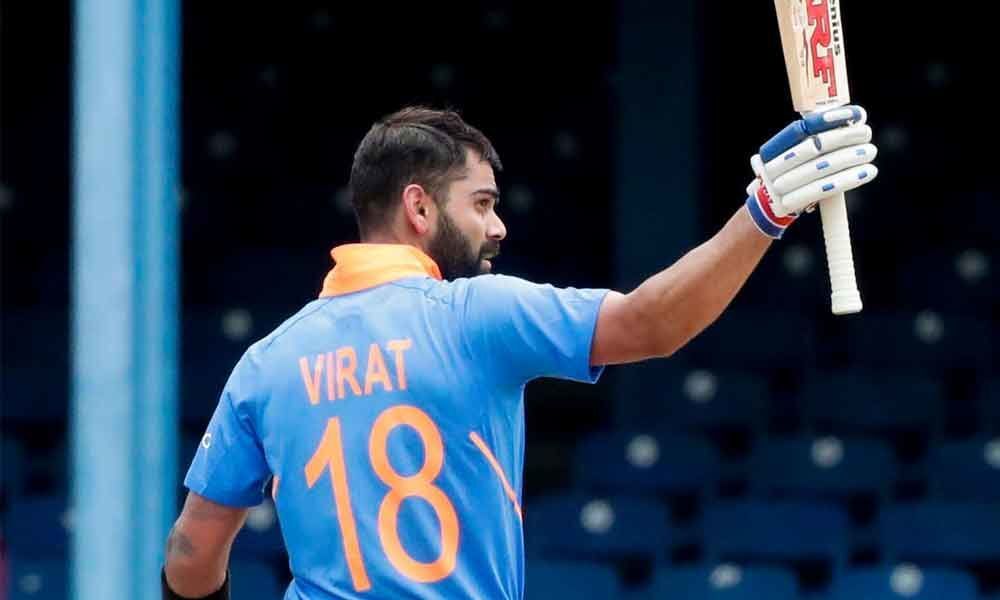 Skipper Virat Kohli broke many records with his 42nd century which he struck during the rain-affected second ODI against the West Indies which India...

Port of Spain : Skipper Virat Kohli broke many records with his 42nd century which he struck during the rain-affected second ODI against the West Indies which India won by 59 runs (DLS method) at the Queen's Park Oval in Trinidad and Tobago here.

His 120-run inning became the highest ODI innings by a captain in the West Indies. The 30-year-old went past Windies' great Brian Lara's 116 which he had scored against Sri Lanka at Barbados' Bridgetown in 2003.

Mahela Jayawardane comes third in the list with 115* which he scored against New Zealand in 2005 at Jamaica's Sabina Park.

On Sunday, Kohli played a majestic 120-run knock which consisted of 14 fours and a six, helping India post 279 which they defended successfully to take an unassailable 1-0 lead in the three-match rubber.

After the match, Kohli said it was the need of the hour for one of the top three to score a hundred and he got the opportunity to step up.

"It feels good to get a hundred when the team wanted me to get one. Shikhar and Rohit didn't get a big one.

One of the top three has always got the big one. A senior man had to step up and today was my opportunity to step up. It was important to string in a lot of dot balls," Kohli said.

During the course of his innings, Kohli also went past former skipper Sourav Ganguly's tally of 11,363 runs in the list of leading run-getters in ODI cricket.

Speaking to leg-spinner Yuzvendra Chahal on 'Chahal TV' for BCCI.TV, Kohli revealed that at the moment, he is enjoying his life to the fullest and is in a very happy space.

In the ongoing West Indies tour, Kohli has been grooving to the Caribbean tunes on a number of occasions. When asked about the same, the Indian skipper said: "I am enjoying myself on the cricket field.

I don't let myself get into a typical mould where I have to restrain myself as I am the captain of the team. We have been blessed to represent India and thus it's important to enjoy the life.

We should dance whenever there is music played and enjoy with the opposition players as well. Right now, I am in a very happy space in my life and that's why I start dancing whenever I get the opportunity."

Kohli also revealed how he was tired when he had reached 65 during his 120-run knock against the West Indies in second ODI which India won by 59 runs (DLS method) at the Queen's Park Oval.

"It is always our target that one of our top three gets a big score. Rohit has been doing that consistently for us. I have also chipped in whenever I have got an opportunity," said Kohli.

"Unfortunately, both Rohit and Shikhar failed today. So, it was important for me to stay at the wicket for a long time and take the score somewhere near 270-280.

"Honestly, I was too tired by the time I reached 60-65. But then the situation was such that I had to play without taking too much of a risk and build a partnership. As a cricketer, we always learn that whenever we are thinking about the team, we get the enthusiasm and the energy to play long."

"The conditions were quite challenging because it rained in the middle and then it got more humid," he added.

When asked about his motivation to play consistently for the team, whether while batting or fielding, the Indian skipper said, "My mindset is quite simple.

I want to contribute to the team in whichever way possible. Whether it's a catch or a run-out, I want to give my 100 per cent.

"I think every player should have a disciplined lifestyle so that he can give his 100 per cent on the field.

If you are not giving your 100 per cent, I don't think you are doing justice to the team," he added.