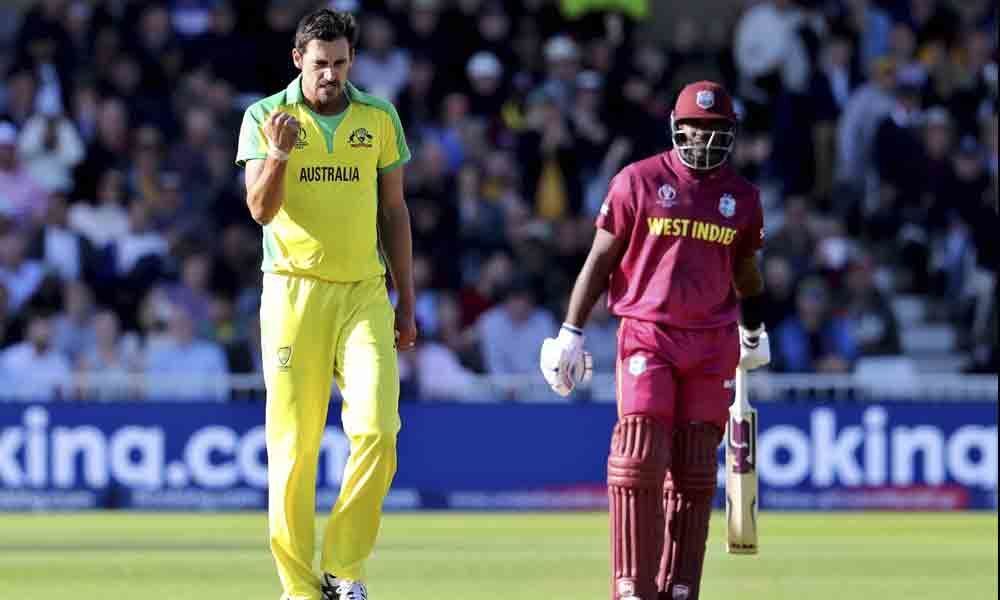 Left-arm pacer Mitchell Starc was at his menacing best against West Indies in the World Cup tie which Australia managed to win at Trent Bridge.

Nottingham (IANS): Left-arm pacer Mitchell Starc was at his menacing best against West Indies in the World Cup tie which Australia managed to win at Trent Bridge.

On Thursday, Starc himself delivered the coup de grace, claiming the first five-wicket haul of the tournament to derail West Indies' pursuit of 289 in Nottingham. He returned with figures of 5/44 and played a pivotal role in Australia's 15-run win over Windies.

Picking up his sixth five-wicket haul in his 77th ODI, Starc became the fastest bowler ever to take 150 wickets in the 50-over format, one match quicker than Pakistan great Saqlain Mushtaq, who achieved the feat in 78 matches.

Next in the list is Trent Boult of New Zealand who reached the landmark in 81 ODIs, followed by Brett Lee (82) and Ajantha Mendis (84).

After his sensational performance, off-spinner Nathan Lyon labeled Starc 'FLOAT' on Instagram, presumably an acronym for 'Fastest Left-Armer Of All Time', reports cricket.com.au.

Australia's next challenge will come at The Oval on Sunday, when they take on India, who defeated South Africa in their opening fixture at Southampton on Wednesday.