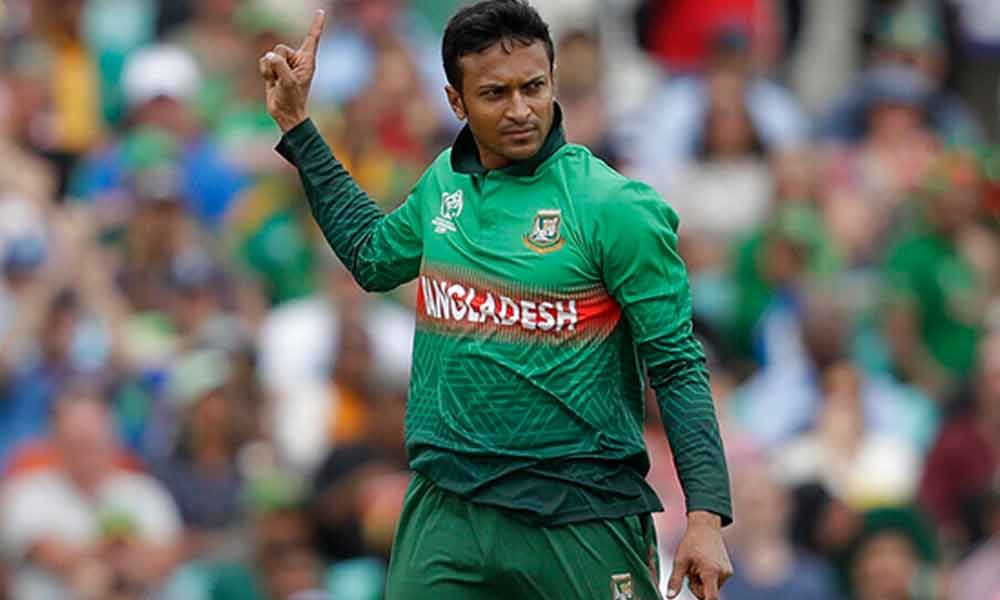 If his innumerable stunners from the past weren’t already enough,Shakib Al Hasan has once again shown his mettle as one of the greatest Bangladeshi cricketers to have played the game.

If his innumerable stunners from the past weren't already enough,Shakib Al Hasan has once again shown his mettle as one of the greatest Bangladeshi cricketers to have played the game. Spearheading his team's cause in its latest encounter against West Indies, the all-rounder shone with both bat and ball to help Bangladesh register a memorable win in the ongoing World Cup.

Chasing a score of 322, Bangladesh had their task cut out against a hostile pace attack. After getting off to a decent start, the men in green lost Soumya Sarkar in the 9th over. The loss brought Shakib to the crease, and the left-hander joined hands with Tamim Iqbal to thrash the Windies bowlers until the 17th over before Iqbal fell prey to a run-out. The experienced Mushfiqur Rahim couldn't trouble the scorers much and was sent back packing after scoring a solitary run.

With game evenly poised at this stage, in-walked Litton Das and there was no looking back for the Asian side. Das provided an able support to Shakib, who looked in red hot form. The southpaw continued with his purple patch in the tournament as he took the bowlers to the cleaners. The 32-year-old carried along his merry way and notched up his second consecutive century of the tournament to bat Windies out of the game. Shakib carried his bat through and remained unbeaten on 124 that came off just 99 deliveries. Interestingly, the left-handed batsman even surpassed Rohit Sharma and Aaron Finch in the process to stand as the tournament's highest run-getter as of now.

Earlier, the all-rounder also made a significant contribution with the ball by chipping in with two wickets in his spell of eight overs.

Shakib was adjudged as the Man of the Match for his all-round show, which proved to be the cornerstone of Bangladesh's victory. And it was not just the award jury that was in awe of the all-rounder skills. The social media too was all praise for Shakib's abilities. Several fans from across the globe took to Twitter and lauded him for a scripting yet another famous win for Bangladesh.

Beaten South Africa,Now again Wonderful chase by @BCBtigers against the windies. It was pure brilliance by @Sah75official to win the game for them #BANvsWI

Brilliant century, full of sumptuous shots, from Shakib. Very very watchable. Bangladesh on the highway to an easy win

Shakib is so underrated. Been a fantastic ambassador for cricket. #WIvBAN

Stunning victory by Bangladesh over the WI! Shakib has been stellar and will go down as one of the greatest all rounders to have played the game.#BANvWI

Shakib. What a player. Contributes so much in so many areas. Barely even celebrates here because he still has a job to do and brings up his century with so much class. #CWC19 #BANvWI

Finch, Kohli, Warner, Rohit, Williamson, Root, Smith, Roy, Buttler all playing at the World Cup, but it's the brilliant Shakib Al Hasan who is the leading runscorer in the tournament #CWC19

Shakib Al Hasan has been one of the world's best all rounders for about ten years now. T20 Blast teams should be looking at his performance, the crowds Bangladesh are pulling and put two and two together. #WIvBAN #riseofthetigers

Shakib Al Hasan is the greatest allrounder and the most valuable ODI cricketer at present. what a cricketer! might get the 'man of the series' award this world cup. @Sah75official #Cricket #CWC19

Shakib should take over as Universe Boss #WIvBAN #CWC19

Shakib Al Hasan has been one of the world's best all rounders for about ten years now. #WIvBAN
One Man Army pic.twitter.com/LrTF5bgQST