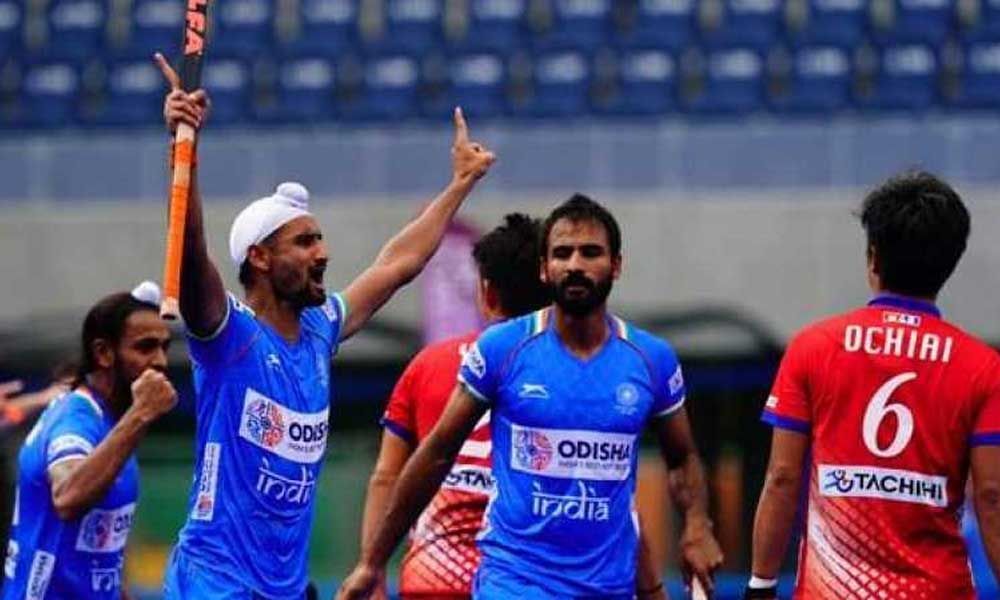 The Indian team bounced back from their 1-2 loss against New Zealand with an impressive display in their third match at the Oi Hockey Stadium here.

The Indian team bounced back from their 1-2 loss against New Zealand with an impressive display in their third match at the Oi Hockey Stadium here.

Mandeep found the target in the 9th, 29th and 30th minutes while Nilakanta Sharma (3rd), Nilam Sanjeep Xess (7th) and Gurjant Singh (41st) were the other scorers for India.

Nilakanta gave India an excellent start through a field goal in the third minute.

Buoyed by the early lead, the Indian team put tremendous pressure on the Japan defence as Gurjant Singh took a shot on goal, but saw his effort going wide of the post.

However, a penalty corner was awarded to India in the seventh minute which was converted brilliantly by Nilam Sanjeep to help the team take a 2-0 lead.

India continued to take the aggressive approach and Mandeep found the back of the net with an excellent field goal in the ninth minute.

Japan tried to make inroads in the last few minutes of the first quarter as they won a penalty corner.

Gurinder Singh positioned himself brilliantly and defended the shot on the goal line.

India led 3-0 at the end of the first quarter.

India continued their attacking game in the second quarter with Jarmanpreet Singh taking a shot on goal, but putting it wide of the post.

Captain Harmanpreet Singh had a shot on target, but the Japanese goalkeeper Takashi Yoshikawa pulled off a brilliant save.

Japan managed to open their account through a field goal through Kentaro Fukuda in the 25th minute, but Mandeep scored two field goals in quick succession to help India take a big 5-1 lead.

The Indian vice-captain scored just before the half-time whistle in the 29th and 30th minutes.

Japan started the third quarter on an aggressive note.

They took a shot on goal, which was blocked out brilliantly by goalkeeper Krishan Pathak.

However, the Japanese team kept putting pressure on the Indian defence and found a field goal through Kenta Tanaka in the 36th minute.

India did not let the momentum shift towards the Japanese side as forward Gurjant found the back of the net in the 41st minute to make it 6-2 which put the world number 5 side in a dominant position at the end of the third quarter.

Japan attacked the Indian defence in the fourth quarter and scored their third goal through Kazuma Murata in the 52nd minute.

India was awarded a penalty corner with five minutes left on the clock, but the shot went wide off the post.

India also saved a penalty corner in the dying minutes of the match.

The win put India in the second spot in the points table and they face toppers New Zealand in the summit clash on Wednesday.