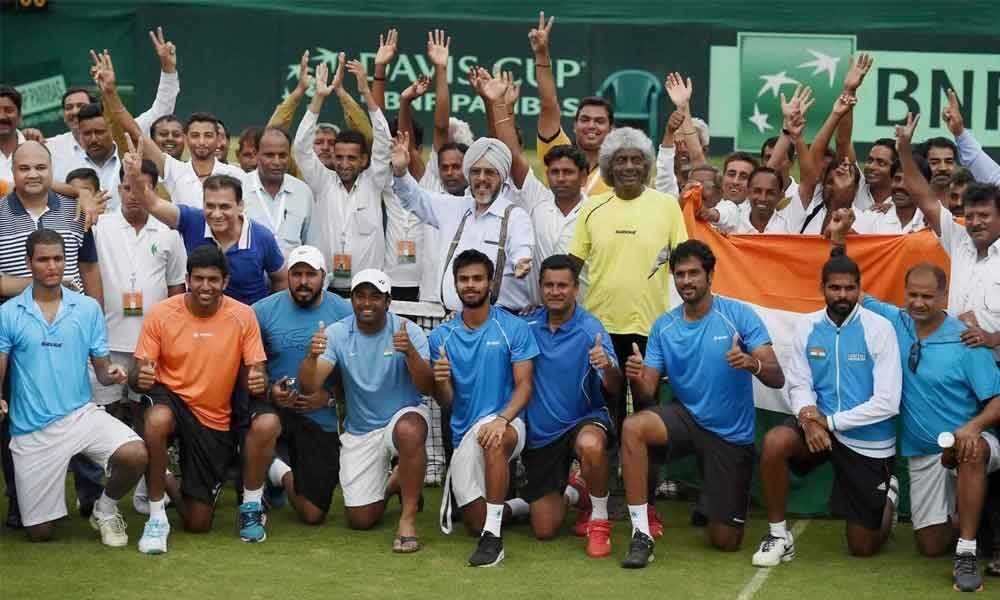 New Delhi : Amid rising tensions with Pakistan, India's national tennis association is likely to approach the International Tennis Federation, seeking a neutral venue for next month's Davis Cup tie in Islamabad and the host federation says it will abide by the ITF's ruling.

India's two-day tie against Pakistan is scheduled to begin in the Pakistan capital on September 14. The Indian government revoked provisions of Article 370 from Jammu and Kashmir, taking away the state's special status and in retaliation Pakistan on Wednesday downgraded diplomatic ties with India.

AITA Secretary General Hironmoy Chatterjee told PTI that in the current scenario, security of the Indian contingent remains a major concern and they are contemplating approaching ITF to provide a neutral venue for the tie.

"It might affect the Davis Cup tie. It's too early to say but what I intend to do is to wait for one or two days to see what turn the situation takes.

Then we will ask ITF (International Tennis Federation) to look into the situation and take a call. And if required, consider a neutral venue," Chatterjee said.

"If they (Pakistan) don't issue visas, how do we go to Pakistan? They might not issue the visas. And if they give visas, will they be able to give us proper security so that we feel comfortable?" he elaborated on the many predicaments that AITA is dealing with right now.

Pakistan Tennis Federation President Salim Saifullah Khan admitted that tension has escalated and said that the PTF will follow whatever the ITF suggests.

"Islamabad is still safe. The tension has definitely escalated but it can de-escalate as well. For us also safety and security of the players is paramount. Winning or losing does not matter, safety is most important," Salim told PTI.

"It's too early to say that it's time to shift the tie to a neutral venue. But if ITF feels that it is better to shift the tie, we have to follow the instruction of the parent body. But as of now I don't see any reason to shift the venue," he added.

No Indian Davis Cup team has travelled to Pakistan since 1964 and bilateral cricket ties between the two countries have been dormant since the 2008 terror attack in Mumbai. Chatterjee said they will also leave the decision on the ITF.

"Pakistan has played a lot of ties at neutral venues. So we will definitely approach the ITF for a neutral venue because the situation is very sensitive at the moment.

What if the ITF refuses to shift the tie, Chatterjee said, "Security parameters are set by the ITF, not us. In case of any mishap, the responsibility will be with the ITF. That's why they have to look into it in a proper manner."

Chatterjee said in the current scenario, they will also seek the central government's view.

"The relations with AITA and Pakistan Tennis Federation are very cordial but it's an issue between two countries. We will wait and then approach both the ITF and our government," he said. Sports Ministry has not raised any objection to the team travelling to Pakistan.

It had also asserted that AITA did not need either the Home Ministry or the Ministry of External Affairs' approval to send players to Pakistan.

"No permission or sanction is needed for visiting a foreign country or playing in any place outside," Sports Secretary Radhey Shyam Julaniya reiterated on Thursday.

When Hong Kong had refused to travel to Pakistan in 2017 for the Group II semifinals, their federation was fined USD 10,000 by the ITF, which also demoted the team to a lower Group in Asia/Ocean zone.

If India forfeit the tie, the team will be left to fight it out in Group II next year and make its way up in the following years.

There are four groups in Asia/Oceania zone, with I being the highest and IV the lowest.

However, if visas are not granted to the Indian players and officials, then the ITF cannot hold AITA responsible for the tie not going ahead and the PTF will be answerable for such a situation.