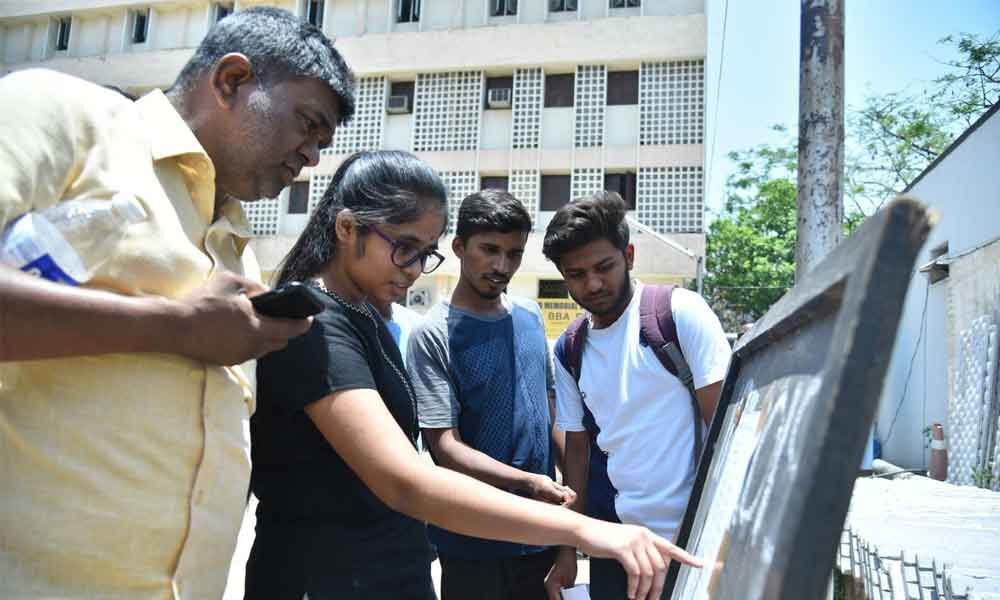 x
Students at a NEET centre in Hyderabad on Sunday.
Highlights

Hyderabad: Over 80,000 candidates appeared for the National Eligibility-cum-Entrance Test (NEET) (UG)-2019 held at various colleges in Hyderabad, Warangal, Karimnagar and Khammam in Telangana. The test was conducted across the country on Sunday.

Despite the National Testing Agency (NTA), which conducted the test, making amply clear about the instructions, candidates in some places turned up wearing ornaments and in full sleeve shirts.

As staff at the exam centres did not relent, such students had to fall in line with instructions after which they were allowed inside.

In Warangal, a women candidate landed up at the exam centre wearing ornaments (nose rings). As she faced difficulty in removing them, cutting pliers were used to take them away from the nose after which she was allowed inside.

Similarly, a male candidate came to the centre in full sleeves shirt. As it was clearly mentioned in instructions to wear half sleeves, the student took the help of a pair of scissors to chop some part of the full hands' shirt to make it look like a half-sleeve shirt. He was allowed later to write the exam.

These scenes were seen in Talla Padmavathi College of Engineering centre in Kazipet of Warangal.

The exam timing was from 2 pm to 5 pm. To avoid the searing afternoon heat, a good number of students and their parents or relatives started reaching the exam centres in the twin-cities from 10 am onwards.

Although the traffic on city roads is comparatively less when compared to weekdays, students took no chance and reached their respective exam centres well in advance.

However, the reporting time was fixed as 12 noon only after which the students were allowed inside the centres. Almost all of them entered the centre premises as per scheduled time of 1.30 pm.

According to noted educationist PVRK Murthy, the difficulty level of this year exam was easy to moderate and comparatively easier when seen with the NEET UG-2018 paper.

The exam paper consists of 45 multiple choice questions each from Botany, Zoology, Physics and Chemistry totalling 180 questions. The correct answer fetches 4 marks, while a wrong answer earns one negative mark.

As the exam paper was found to be easy, academicians say the cut-off mark for top-ten ranks (all-India wide) was likely to be between 700 and 705 marks. Last year, the tenth ranker got 685 marks out of 720.

However, the question paper had its share of issues.

Four questions from Biology were found to be out of NCERT text book syllabus, while one question in Chemistry has two correct answers in the multiple choices given.

On the whole, Physics section was easy to moderate. However, some students faced difficulty in Physics numerical. Chemistry section was of moderate difficulty level. Whereas Zoology and Botany were a mix of factual and easy conceptual questions.

S Tanvi Reddy, who took long term coaching for NEET from a local college stated that the exam paper was easy and she was able to answer all 180 questions in the three-hour stipulated time.