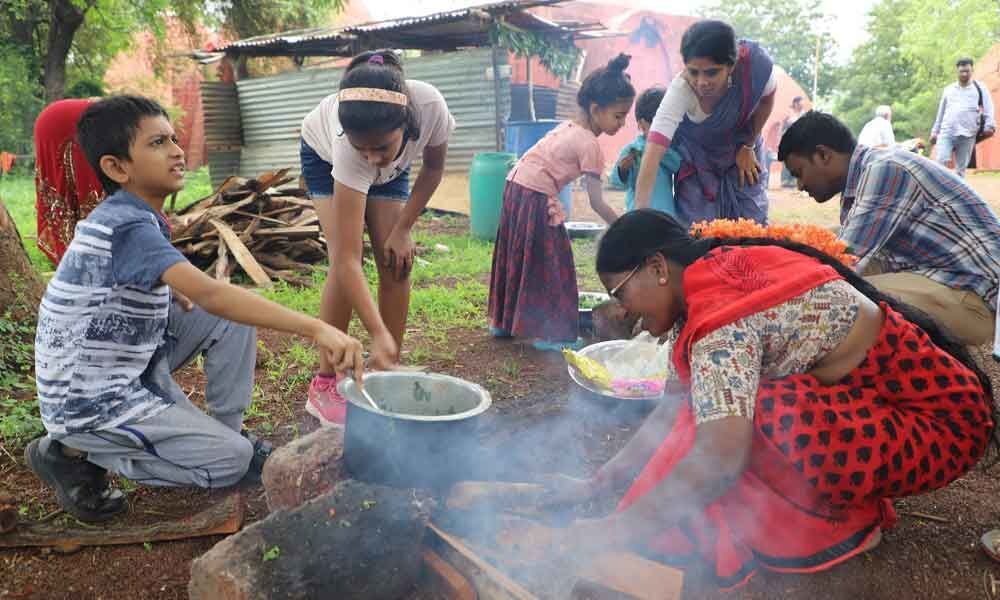 The Deccan Development Society organised the ‘Festival of cultivated leaves’ at Pachasale premises on the outskirts of Machanuru, near here on Sunday. Users along with farmers from both the Telugu states and Maharashtra participated in the programme.

Zaheerabad: The Deccan Development Society organised the 'Festival of cultivated leaves' at Pachasale premises on the outskirts of Machanuru, near here on Sunday. Users along with farmers from both the Telugu states and Maharashtra participated in the programme.

Awareness on 150 varieties of leaves, which grow naturally during cultivation of millets, was explained to the participants. Experts who took part in the programme said people were not able to recognise the leaves which were more nutritious. The volunteers of the ogranisation took the visitors to the fields where different kinds of millets were being cultivated. Later, they were served the food prepared on campus with organic millets and leaves.

Speaking on the occasion, director of DDS PV Sateesh said people were not aware that the plants that grow along with millets, which do not require water and pesticides, were of more nutritious. People in the urban areas were realising the values of these plants now and hence an awareness camp was held here, he said.

Chairman of Lee Pharma Alla Venkat Reddy who also participated in the event said that instead of consuming the inorganic food and getting affected with health issues, people should prefer natural food. He suggested that the government should provide minimum support price for the produce and supply to schools for mid-day meals.

The busy people from the cities visited the site along with family members to know about the organic food. A large number of people from Hyderabad, Bidar, Zaheerabad, Narayankhed and other places also participated. As many as 60 farmers from Vizianagaram, 10 from West Godavari, 45 from Bidar also took part.