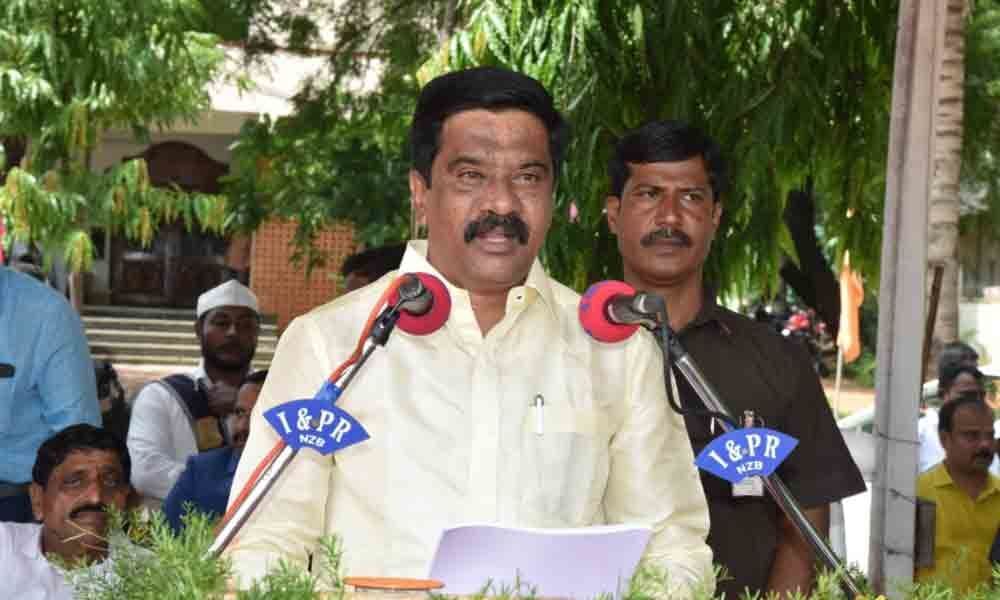 Later addressing the people of Nizamabad district on 73rd Independence Day celebrations, the Minister explained that all sectors in Nizamabad district from agriculture to ZP have achieved equal integrated development. Stating that the revived scheme of Sriram Sagar Project also has been completed with an amount of Rs 1,771 crores, he hoped that about 1.80 lakh acres of irrigation land will come into irrigation.

Prasanth Reddy informed that Rs 147 crores has been paid to 1,34,080 farmers in the district under Rythu Bandhu scheme. Under farmers' insurance scheme, "Rs 28 crores has been distributed to the families of 561 deceased farmers. Under Mission Kakatiya scheme, ponds have been repaired at a cost of Rs 220.28 lakhs. The district has been sanctioned Rs 332 crore for Mission Kakatiya works and other lakes are being developed with these funds.

A total of 35,59,000 working days have been provided to 1,95,810 families under Mahatma Gandhi National Employment Guarantee Scheme. 26 bridges are being constructed under the aegis of Panchayati Raj Engineering Department in the district at a cost of Rs 43 crores. The R&B department is constructing 82 infrastructure projects at a cost of Rs 686.5 crores and the results will be felt soon by the people of the district," Vemula said.

The Minister explained that the government is paying attention to the health care of the people in the district with many schemes like Kanti Velugu and KCR Kits. 13 dialysis machines will be installed at Nizamabad Government Hospital and treating 30 patients a day. Five ventilators are available and no one had ever set them up in a government hospital. As many as 96.66 lakh saplings have been planted under Haritha Haram drive. The government had supplied fishing and marketing infrastructure to about 4,205 fishermen. Development works worth about Rs 300 crores are in progress in Nizamabad city. Minister Reddy said that 621 double bedroom houses were constructed in the district. 1,771 people have applied for Kalyana Lakshmi and 786 for Shaadi Mubarak schemes and Rs 26 crores has sanctioned to the newlyweds by the Chief Minister, he added.