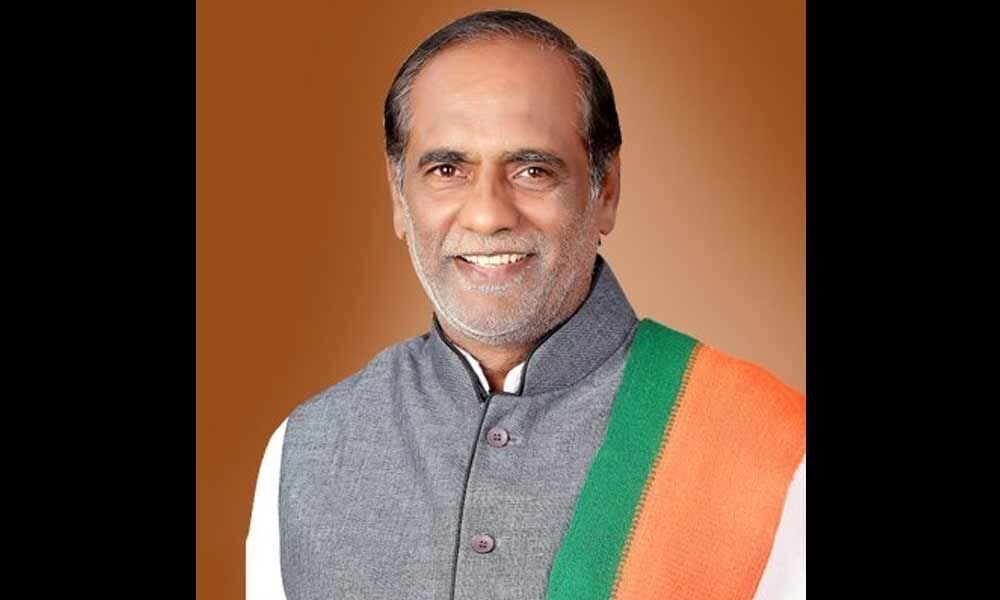 In an exclusive interview with The Hans India, BJP State unit president goes hammer and tongs against the ruling TRS party for refusing to acknowledge the Centre’s ‘contribution’ for the development of the State. Assembly elections were held on local issues. National issues dominate Lok Sabha elections. Apart from it, the polls will decide who is at the helm of the affairs in New Delhi. As the people have faith in Prime Minister Narendra Modi, people will vote for the BJP, he hopes

Given the fact that your party could not retain its own seats in Assembly elections, what bright spots do you see for the party in Lok Sabha elections?

Assembly elections were held on the local issues and to select the Chief Minister of the State. The election campaign by TDP national president and Andhra Pradesh Chief Minister N Chandrababu Naidu helped his counterpart and TRS chief K Chandrasekhar Rao come back to power.

He whipped up the Telangana sentiments by projecting the interference of the TDP chief. He succeeded in diverting people's attention from the real issues like farmer suicides, family and dictatorial rule and corruption and other important issues.

But now it is different. The question before the people is which party should come to power at Centre and who should be Prime Minister of the country. Modi is not only a charismatic leader but also he has earned his popularity by delivering a corruption-free, accountable and responsible governance in the last five years.

What kind of performance of the BJP-led NDA at the Centre do you think has the peoples support?

There are so many initiatives that Prime Minister Narendra Modi's government has taken in the last five years. But, an agenda-less and leaderless parties are coming together only making false propaganda about the Centre.

For example, the vote on account budget presented by the Centre for the current fiscal year provided Rs 6,000 financial input to the farmers, 10 per cent reservations for the economically backward classes (EBCS).

The other schemes benefitting the farmers include soil health cards, crop insurance, the announcement of MSP to several crops etc. The income tax relaxation from Rs 2.5 lakh to Rs 5 lakh per year has been long due.

Providing Rs 3,000 bonus to those from the unorganised sector, giving constitutional status to the BC commission, GST, demonetisation, surgical strikes to destroy the Pakistan sponsored terror infrastructure and camps across the border and development activities are a few to list out.

But, the TRS chief had charged both BJP and Congress of failing to develop the country at a pace it is supposed to have been developed and wanted people to get rid of both the parties to adopt a right direction of development for the country. How do you respond to it?

That's not true. The fact is KCR is sacred that Modi's popularity might cast a shadow on his image. For example, out of Rs 31 subsidy on each kilogram of rice being distributed to the poor, the Centre bears Rs 29 and the State contributes only Rs 2. Similarly, he has refused to implement the Rs 5 lakh health cover for the poor families per year under the Ayushman Bharat Scheme launched by the Centre.

It is benefiting about 50 crore people. The State government is providing Rs 12,000 financial assistance to the farmers per acre per year. In addition, now, small and marginal farmers in Telangana State are getting an additional Rs 6,000 from the Centre under the Pradhan Mantri Kisan Samman Nidhi Yojana (PMKSNY).

Then, what is stopping KCR to extend similar relief to the poor households in the State adding Ayushman scheme? This scheme helps people to avail themselves of benefit anywhere in the country.

Infrastructure development like roads, ports, airports are the growth engines and have a lot of impact in improving the economy as well as the living standards of the people creating jobs and other economic opportunities.' What has NDA government done for Telangana State in last five years? This is what KCR questions?

Being a Chief Minister occupying a responsible position KCR should have done his homework properly, before making wild allegations against the BJP and the NDA government.

Union Minister for Road Transport and Highways, Shipping and Water Resources, Nitin Gadkari is known for doing a lot of serious work on this front. For example, KCR was referring to the speed limits on the highways comparing India with other countries.

It was during April 2018 the Centre had notified increasing the speed limits of various kinds of vehicles on the expressway with access control, four-lane and above divided carriageway, roads within municipal limits and other roads.

The maximum speed limits on expressways of a motorcycle in the country is 80 kmph. In the case of others, it is pegged at 120 kms, depending on the type of vehicle.

Under Pradhan Mantri Grameen Sadak Yojana rural roads have been taken up.

Similarly, Golden Quadrilateral, Bharatmala Pari yojana, to improve the roads and highways was taken up. Telangana was given the higher length of national highways than the national average. Nitin Gadkari had also sanctioned a dry port for Telangana.

Who stopped Congress, in which, KCR also served as Union Minister from putting these projects on fast track? Does KCR have an answer for all this than belittling the nation compared with China and other countries than misleading people for political gains?

Who is your main opposition during the elections?

TRS is our main opposition. Congress has already lost its ground with more and more leaders and MLAs deserting it. People had given a mandate to the Congress twice to play the role of an opposition.

But now they see that even if they vote for the Congress there is no guarantee that they would not defect to the TRS. So, people are looking at BJP as the only remaining and viable alternative for the TRS in Telangana.

Do you have any clarification on the issue, whether BJP is a political party or a party of religious propaganda?

Certainly, it is a political party. But for narrow political gains KCR is trying to divert the attention of people and to polarise the voters on communal lines and to appease AIMIM chief Asaduddin Owaisi.

How many seats do you think you can win in the parliament elections?

I am not an astrologer to predict. But we will improve the tally and winning of Mahbubnagar seat is a foregone conclusion.