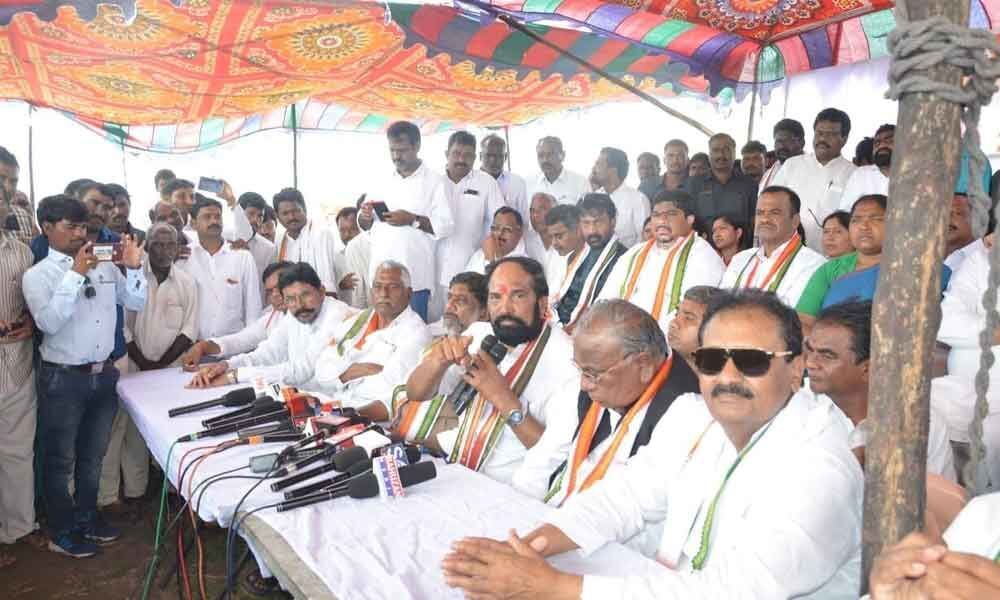 Uttam Kumar Reddy, along with other senior leaders of Congress party, visited Tummidihatti in Adilabad district on Monday. The Congress leaders visited the place where foundation stone and pylon for Pranahita Chevella Project was laid by the then Chief Minister Dr Y S Rajasekhara Reddy in 2008. They also took a boat ride in the Godavari River.

Speaking to media persons later, Uttam Kumar Reddy said the previous Congress government had begun the construction of Ambedkar Pranahita Chevella Project at a cost of Rs 38,000 crore to irrigate 16 lakh acres of land. Works on digging of canals were also launched.

The Congress party had lost the 2014 elections and TRS came to power. Present Chief Minister K Chandrashekar Rao was also in favour of completion of Pranahita Chevella project and the TRS legislators and MPs were told to fight with the Centre to get national project status for it.

The TPCC president said after about one-and-a-half year in power, the Chief Minister took a U-turn and announced Kaleshwaram Project in the name of redesigning of Pranahitha - Chevella.

He said the Pranahita river gets inflows of nearly 160 tmcft which was confirmed by WAPCOS in its report by stating that this area has been getting similar inflows for the last 70 years.

The Previous Congress government proposed to construct the barrage of 152 metres height at Tummidihatti. Since this would have submerged 3,000 acres of land in Maharashtra, present Chief Minister Chandrashekar Rao redesigned the project and announced construction of barrage at Tummadihatti at a height of 148 metres.

He also signed an agreement with the Maharashtra government and even organised grand celebrations at Begumpet Airport on that day, he recalled.

Uttam Kumar Reddy alleged that Chandrashekar Rao was concerned about submergence of 3,000 acres in Maharashtra, but not worried about lack of irrigation water to lakhs of acres in Telangana State. He said despite so much fanfare and celebrations, the TRS government did not construct the barrage at Tummidi Hatti.

Stating that nearly Rs 80,000 crore were spent on Kaleshwaram project, he said the government would be forced to spend huge amount on its maintenance and operations every year.

The TPCC chief said the barrage at Tummidihatti could be constructed at a minimal cost and by lifting water up to 15 metres it could be supplied to Adilabad, Nizamabad and other areas through gravity. Unlike other barrages constructed by the TRS government which involved huge maintenance and heavy expenditure on power to lift water, the barrage at Tummidihatti would be just one-time investment.

By spending Rs 4,000 crore for construction of barrage at Tummidihatti, at least 120 tmcft of water could be used. He alleged tenders worth several hundred crores were awarded on nomination basis for the Kaleswaram project. Several rules were violated, and norms flouted.

Though the Congress party has been alleging huge corruption, the TRS government never gave a satisfactory reply. He asked the Chief Minister to explain as to why global tenders were not called for Kaleshwaram project.