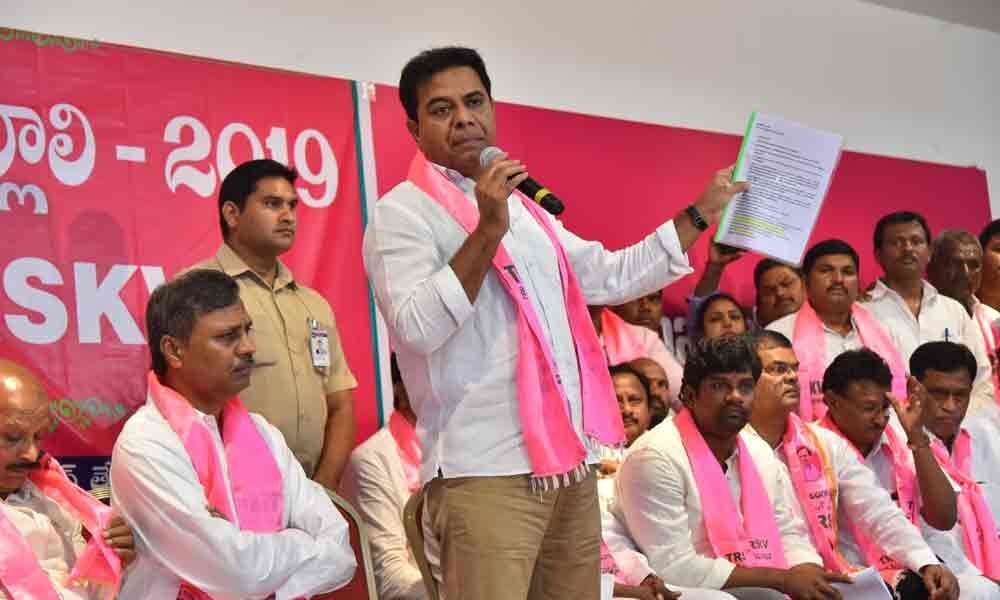 TRS working president KT Rama Rao has warned Congress leaders of filing defamation cases for their baseless and faulty accusations against him in the...

Hyderabad: TRS working president KT Rama Rao has warned Congress leaders of filing defamation cases for their baseless and faulty accusations against him in the Intermediate results goof-up issue. He faulted opposition parties for trying to flare up the Intermediate fiasco as they have no issue to fight against the government.

Speaking at a May Day programme held at Telangana Bhavan, KTR said that his name was unnecessarily dragged into the issue. If Globarena Technologies gets the tender, what it has got to do with KTR, who incidentally was the IT Minister, he questioned. He said some are stooping so low declaring this as a Rs 10,000 crore scam while the tender itself was Rs 4.3 crore.

If opposition parties wish to take on KCR, they should raise other issues instead of politicising Intermediate results matter, he felt. "The issue is sensitive. I appeal to students and parents to exercise restraint and not get carried away by the propaganda of a few vested interests.

With folded hands I appeal to political parties to think about future of students and exercise restraint," he said. Pointing out that High Court was hearing into this case, KTR said that he would be the first one to demand the government to punish the guilty, whose names would be pronounced by the court.

Rao said that reverification and recounting processes would be completed shortly and until that time everyone needs to be patient. Meanwhile, commenting on Intermediate issue, Chennur MLA Balka Suman flayed Congress working president Revanth Reddy for trying to mislead the students and parents with his baseless allegations.

"Globarena contract was entirely handed by education department. What is the role of IT department in this matter? Unneccesarily bringing KTR's name into the issue, Revanth is accusing of hundreds of crores of irregularities and thousands of crores of corruption, which is baseless," Suman said.

Coronavirus: All You Need To Know About Symptoms, Prevention, Risks