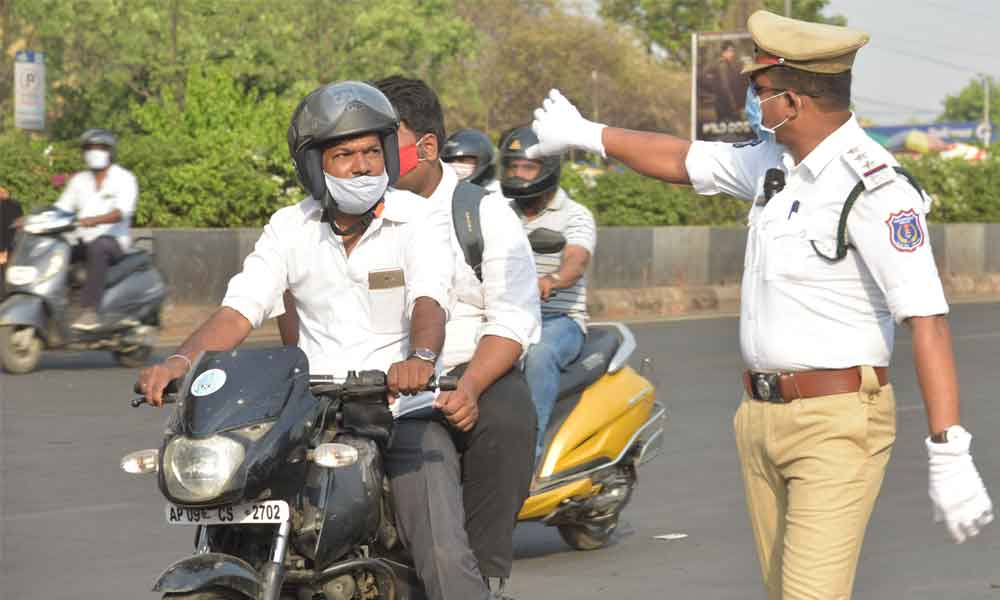 Hyderabad: The newly implemented challan system of penalising the pillion rider for not wearing helmets is causing huge problems to the taxi riders who ride bikes on rentals such as Rapido, Ola & Uber.

While the bike aggregators have instructed the captains (bike drivers) to ensure that the pillion rider wears a helmet, true to Hyderabadi style, many pillion riders were not willing to put on the helmet and have different reasons. They say that they will not use the helmet used by someone else.

It may not be hygienic and more over due to summer heat it would lead to sweating. The helmet may even be having corona virus, they say. Muneer Ahmed, a bike captain with Rapido said, "I never had a challan on a bike in my entire life because I have always abided by the law and followed the helmet rule and always maintained the required documents for travelling. But to my astonishment I got my first challan of Rs 150 on March 23 for a pillion rider not wearing a helmet."

"Actually on the specified date I was dropping a customer and he refused to wear a helmet because he was afraid due to the ongoing corona virus wave. When I insisted he questioned me, who will be responsible if he contacts the deadly virus unnecessarily as the same helmet is worn by every customer." The big question now is who will be responsible for the challan? asks Muneer.

Another captain, Shiva Naik, said, "Customers who are pillion riding with us don't feel like wearing helmets because of the sweatiness in it and it is totally understandable because if one customer sweats after wearing the helmet and within a few minutes we get another ride and if we offer the same helmet to the next customer they get irritated.

In a few cases the customers cancelled their rides only because we offered them helmet worn by previous customers." "We hardly earn a decent wage.

The fuel prices have skyrocketed and on top of it if we have to pay challans for the fault of customers, it is better not to be a captain," said Siddharth, another bike captain.

"We may have no option to agree to the customer's insistence not to wear a helmet but we cannot refuse to pay the challan or else our bikes will be seized," he lamented.

An officer from the Traffic department on condition of anonymity said that if there is an issue with pillion riders not wearing helmets due to some concerns then the respective company managements can approach the police department and find a solution to the issue.