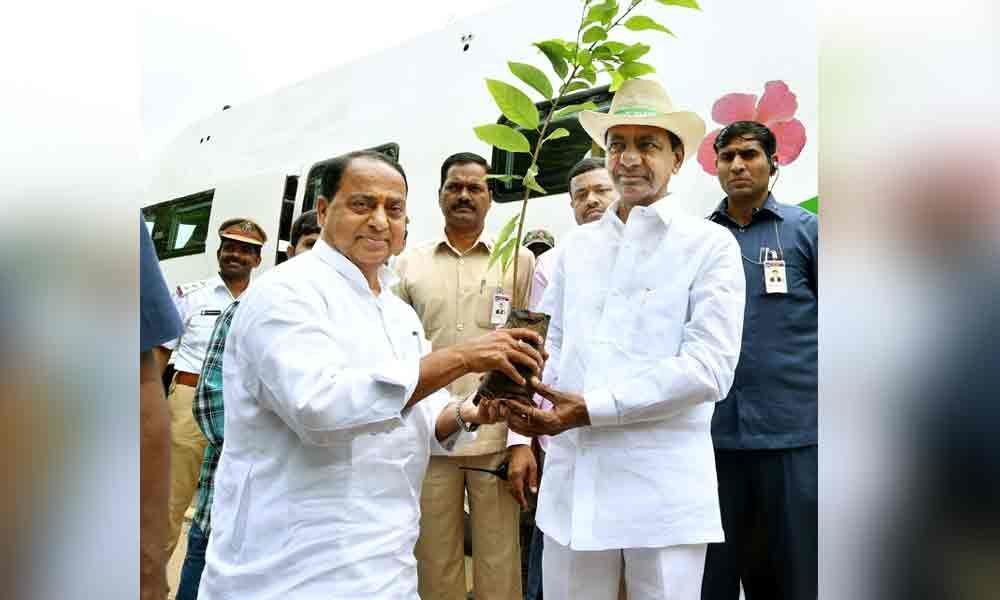 After a marathon meeting in Pragathi Bhavan on the first day of the Collectors Conference, Chief Minister K Chandrashekar Rao took Collectors on a field visit to his assembly constituency Gajwel on Wednesday

Hyderabad: After a marathon meeting in Pragathi Bhavan on the first day of the Collectors Conference, Chief Minister K Chandrashekar Rao took Collectors on a field visit to his assembly constituency Gajwel on Wednesday to give them a glimpse of forest rejuvenation works.

The Chief Minister personally demonstrated to the Collectors the forest revival programme being implemented at Singayapalli, Nentur and Komati Banda falling under his constituency limits.

He explained that at the time of formation of the Telangana State in 2014, the entire forest area was without trees and was an arid patch resembling a desert. With a view to revive forest in the forestlands, a comprehensive plan was prepared and implemented. The revival works that began three years ago, are showing results now, he said.

The entire area is full of greenery and there is an increase in the rainfall. With as many as 27 varieties of fruit bearing trees being grown in the forest area, they have become like monkey food courts, he stressed.

He said 66.48 lakh hectares of forestland was available in the State and it was about 23.4 per cent of the total land in the State. But in the same ratio, forestlands were not there, the Chief Minister lamented.

Principal Chief Conservator of Forests R Shobha, Additional PCCF RM Dobrial explained to the Collectors the forest revival programme implemented in the Gajwel forestlands. They said that revival of the forest decreased the temperatures and led to increased rainfall and also reduced the pollution levels. Forest officials said funds from CAMPA programme are available and they can be utilised for the afforestation initiative.

After participating in the forest revival programme, the Collectors visited the Mission Bhagiratha Plant constructed at Komatibanda. The Chief Minister had lunch with the Collectors there. Later, he held a meeting with them on the implementation of the new Panchayat Raj Act, new Municipalities Act and the proposed new Revenue Act.

He said that the government's aim was to have clean and green villages and towns, and accordingly, measures should be taken during the 60-day action plan in the State. Minister and few MLCs and CMO officials were also present.