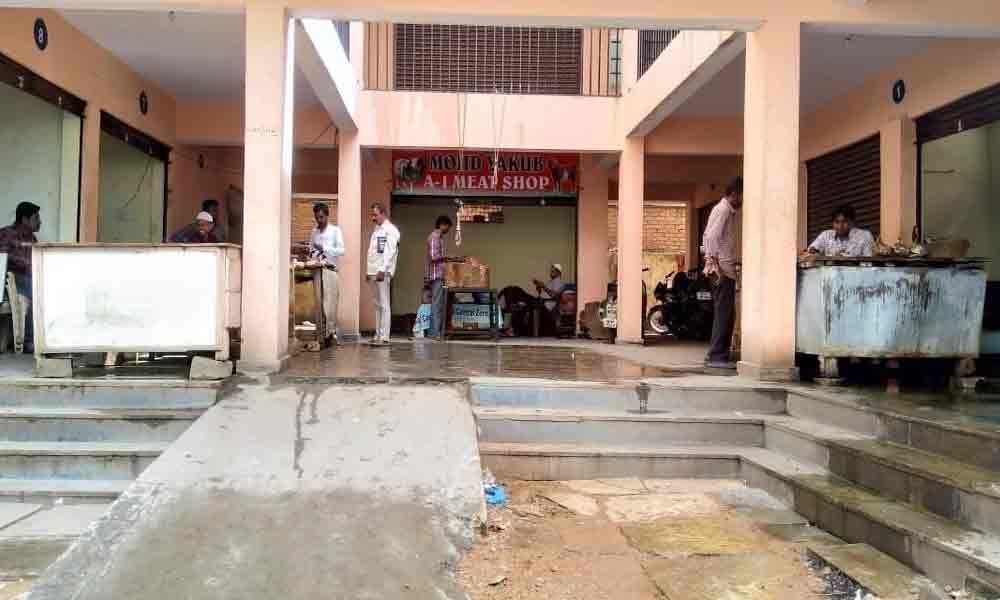 Despite fulfilling the criteria for a modern market with all kinds of amenities, the model market at Old Malakpet (with Ground + 1 building) remains vacant, except for few meat shops.

Malakpet: Despite fulfilling the criteria for a modern market with all kinds of amenities, the model market at Old Malakpet (with Ground + 1 building) remains vacant, except for few meat shops.

The construction works were completed several months ago, but the debris and unhygienic surroundings discourage the shoppers to visit the existing shops, while two-third of shops remains vacant.

This area also famously known as Mutton market, amongst the 18 shops around six were allotted to those who were running meat shops prior to the construction of new building, while the remaining were put on hold.

The surroundings of the model market reflect the apathy of the authorities which failed to maintain hygiene. Even the construction debris and the accumulated garbage lie unattended for months. This remains one of the reasons for low turnout of shoppers, even though meat sellers regularly open their shops.

Even as the State government claims to be putting in more efforts to modernize the markets with the concept of Model markets, the negligence of the authorities smacks such arguments.

"It took 3 years for new building to be constructed owing to procedural delay and release of funds. After the structure was built, the delay in allocation of shops turned the open space of market into open littering place.," wondered Emran Khan, a resident.

The place historically had 80-year-old market since the time of Nizam's catering to the local populace. The well-known Mutton market had 10 shops, selling mutton, chicken and beef. "As it was an old structure, members of market committee had given representations to local MLA and other authorities to develop the market.

After many representations, in 2016 MLA decided to construct a new market which includes not only meat, but also general items and the funds to the tune of Rs 50 lakh were sanctioned through MLA funds," said Mohammed Mujahid, one of the meat traders.

Speaking to The Hans India, Mujahid said that the construction works of model market were started 3 years ago. As per the GHMC plan a total of 18 shops were to be constructed in market in which 9 shops for meat and remaining 9 for general items. The building was constructed around three months back, after a long gab of three years and ever since we are running our shops in new market", he added.

Speaking on the issue representative Corporator of Old Malakpet division Md Safiuddin Shafi said the entire works of the model market were completed. All 18 shops were also allotted through bidding process.