Painful moment to lose services of Narasimhan as Governor: CM 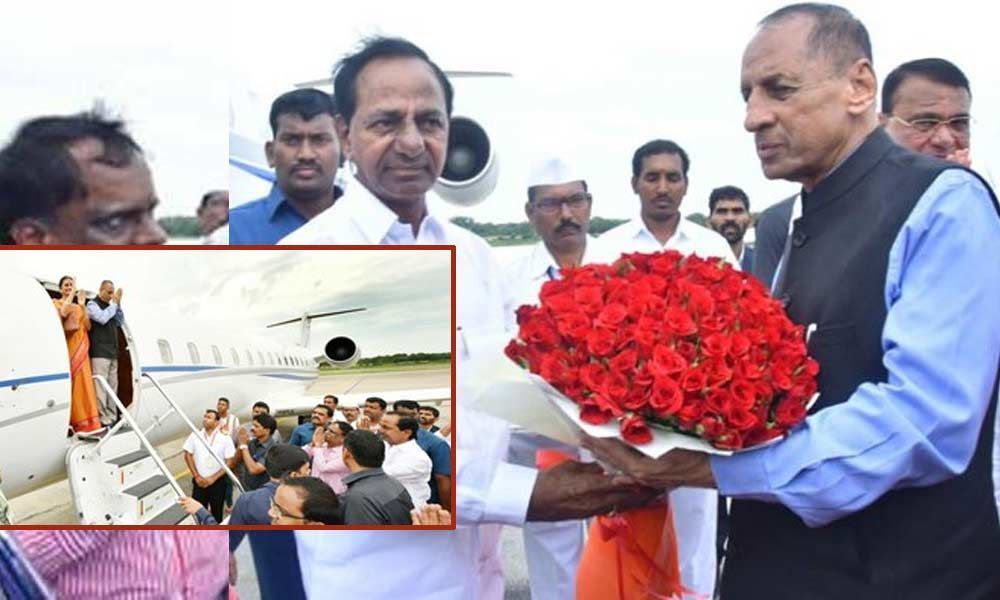 Chief Minister K Chandrashekhar Rao said that it is really a painful moment to lose the services of Governor ESL Narasimhan, who had a firsthand understanding and awareness of the background of Telangana Statehood movement, the formation of the new State and journey of the new State.

Hyderabad: Chief Minister K Chandrashekhar Rao said that it is really a painful moment to lose the services of Governor ESL Narasimhan, who had a firsthand understanding and awareness of the background of Telangana Statehood movement, the formation of the new State and journey of the new State.

The Chief Minister said he shared several great memories with Narasimhan who always patted on the back, inspired, encouraged and instilled confidence in him. The CM said for every festival the Governor couple used to organise on a grand scale at Raj Bhavan and now those lip-smacking delicious taste of food items will be missed. The CM said that the inspiration, guidance shown by Narasimhan would be taken forward in future.

The heart touching meeting of farewell to Narasimhan was held here on Saturday at Pragathi Bhavan. Speaking on the occasion, KCR recalled his long association with Narasimhan and how he (the Governor) stood by him (KCR) and encouraged at every moment of time. KCR said it was painful that Narasimhan is leaving after completion of term of office of the Governorship. During his speech, the CM several times became impulsive.

"The Telangana State was formed when Narasimhan was the Governor. TRS came to power twice during his tenure ship. I have a special relationship with him. I always regarded him as an elderly gentleman and elder brother. He also did not treat me as a CM but as a younger brother. He used to discuss with me the pros and cons of several schemes introduced by the government. He used to inquire about the aims and objectives of the schemes. He immensely liked KCR Kits, Haritha Haram, Double Bed Room Houses and Mission Bhagiratha schemes. He expressed satisfaction that these schemes are very useful for the poor.

He also used to inquire about the financial situation in the state. He would pat me and instil confidence in me whenever sometimes I was hurt or faced adverse conditions. He would bless me that since I was working for the welfare of people, I should make my human effort and God would shower his blessings. He always wanted that every task that is undertaken should be accomplished. Each time I went to Raj Bhavan he would affectionately talk with me. He would discuss all matters with me. He has turned Raj Bhavan into Praja Vedika. Anyone had a chance to go to Raj Bhavan and convey the problems they are facing. For all those visited Raj Bhavan, the Governor couple used to comfort them like parents. The Governor used to explain about the good work done by the Telangana State government to the Central Ministers and Central Institutions. This has got us several appreciations. He also showed initiative in solving issues between the Telangana State and Andhra Pradesh State," the CM said.

"When we launched the reconstruction work of Yadadri, the Governor couple with utmost religious allegiance wore sacred clothes and took part in the Pooja programme. I have lost my parents. I do not have an elder brother. I wanted to seek blessings from the elders and start this work. For me, the Governor couple is the elders. Like a younger brother, I touched their feet and took blessings and launched the work. That work is being continued successfully. Narasimhan should come back once the Yadadri works are completed. He should participate in the Pooja. The affection and love shown by Narasimhan will be remembered forever," the CM said.

"Like the respect, we gave to Narasimhan, we will also extend the same to the new Governor. We will protect the prestige of Raj Bhavan," the CM said.

Governor Narasimhan made an emotional reply to the farewell given to him. "Giving respect to elders, showing humanity when someone is in distress and living up to the faith, these qualities I found in KCR. Sometimes when I called him and said Namskaram, he would immediately tell me elders should not greet namskaram to the youngers. That culture has taught me a lot. When my mother passed away, KCR reached me within 15 minutes. He said he would take care of everything and as he promised he did take care of everything. He sent me by Chopper to immerse the ashes. He made all the required arrangements at the temples and showed his humanity. When I came as Governor, as a leader of the Telangana movement, KCR said he would always cooperate with me. He stood by his word. He showed his faith. Mutual faith has always there between us," the Governor said.

"There is humanity in several schemes brought in by KCR. There is humanity in KCR Kits and Double Bed Room Houses Schemes. The visionary that KCR is demonstrated in the irrigation projects and in Mission Bhagiratha. Maintenance of law and order is very good in Telangana State. KCR used to explain to me about every scheme and aim behind them. When I asked whether there are enough financial resources, KCR would confidently tell me that Telangana State is a rich state. Several schemes of Telangana used to come up for discussions all over the country. I have told the PM on how the CM operates a computer and handles mouse and gives a presentation on the screen about several schemes. KCR knows the pulse of the people and their problems. This is the reason why he brought in several good schemes. I have learnt a lot working with him. We used to discuss matters for hours together. We used to have sharp and fiery discussions. Under KCR leadership Bangaru Telangana can be realised. Where ever I am, when I read reports that

Telangana stood first in such and such a sector, or it is on top of a certain issue, I would feel very happy. My name as the first Governor of Telangana State would there forever, nobody ever can change it," the Governor said.

The Governor laced his speech with several Sanskrit Slokas and repartees. "So many people talk about Kalvakuntla Chandrashekhar Rao and they all speak without meeting (Kaluva Kunta), but I speak meeting him. My name is Narasimhan and I have lived up to my name or else people say I did not live up to my name, hence sometimes I had put on the Narasimha Avatar.