Sadhguru stresses need to promote well-being of people in Karimnagar 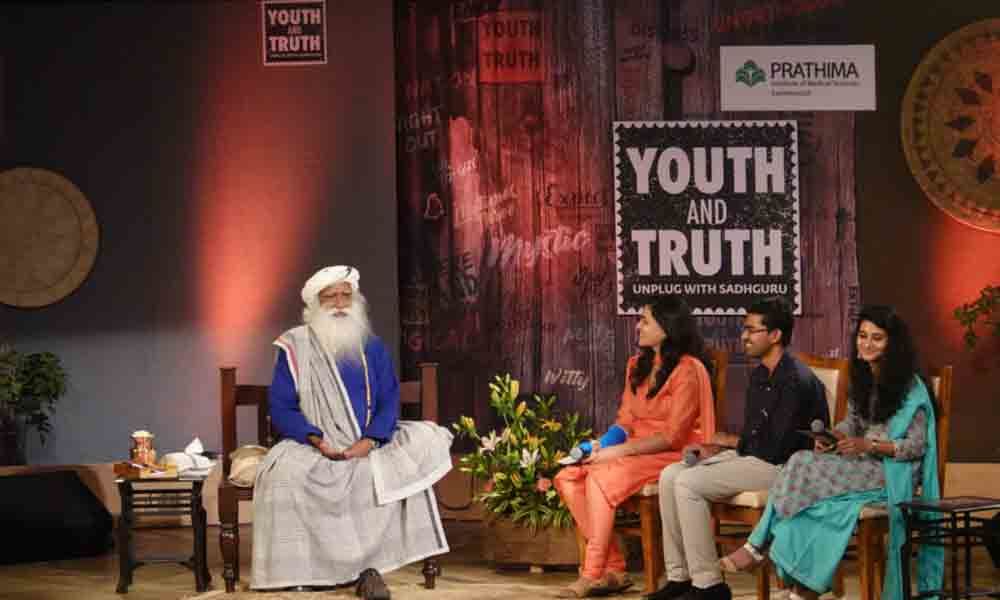 Sadhguru Jaggi Vasudev, the founder of Isha Foundation, on Monday stressed the need to promote health and well-being of the people.

Karimnagar: Sadhguru Jaggi Vasudev, the founder of Isha Foundation, on Monday stressed the need to promote health and well-being of the people.

Sadhguru, who attended a programme 'Youth and Truth' organised for the first time for the medical students, was given a rousing reception by a packed hall of over 1,300 medical and nursing students, besides doctors and faculty members of Prathima Institute of Medical sciences in Karimnagar.

Sadhguru launched the 'Youth and Truth' movement in September 2018. He exhorted the youth to ask questions on issues that mattered most to them. The objective of the movement is to bring clarity and balance to young peoples' lives, so that they would invest their energies in productive pursuits.

Responding to the questions posed by the medical students, Sadhguru interacted with them by answering their questions.

Answering a question on violence against doctors, Sadhguru brought the attention to the violence that was being promoted in cinemas and in video games.

He stressed the need to promote non-violence as preached by Mahatma Gandhi, on his 150th birth anniversary.

On Ayurveda, siddha and other Indian healing practices, Sadhguru advised, "It is the time the young doctors, who are coming up now, should focus on looking beyond the symptoms," and that this was the most significant aspect of traditional medicine such as Ayurveda and Siddha.

Managing Director Boinapally Srinivas and Dean of the institute Boinapally Dr Harini, faculty members, medical students and nursing students were present along with others.