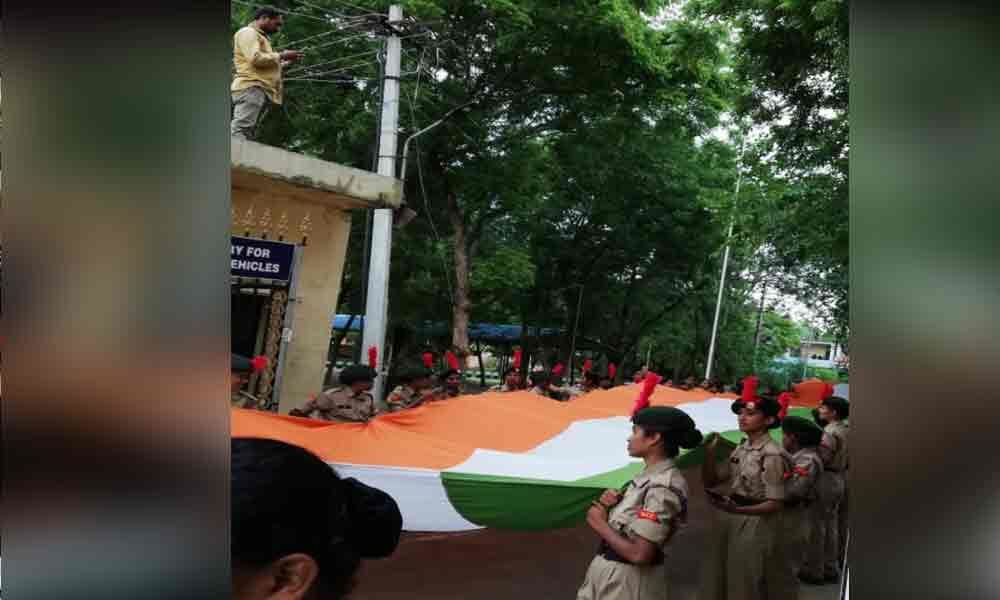 he students of the Government Women’s Degree College in association with ‘Vibrants of Kalam’ organisation observed the 4th death anniversary of former President late APJ Abdul Kalam on a grand scale here in Karimnagar on Saturday.

Karimnagar: The students of the Government Women's Degree College in association with 'Vibrants of Kalam' organisation observed the 4th death anniversary of former President late APJ Abdul Kalam on a grand scale here in Karimnagar on Saturday.

College principal Dr T Sree Lakshmi paid tribute by garlanding to the photo of Abdul Kalam here at on the college premises.

Later, to mark the occasion, the students took out rally holding 83-metre long national flag reflecting the moral life of former president. Speaking on the occasion, College principal Dr T.Sree Lakshmi said that Abdul Kalam was an aerospace scientist who served as the 11th President of India from 2002 to 2007 and was widely referred to as the people's president and Missile Man of India.

Even after his sudden demise, Kalam continues to be an inspiration to the country and to the people across the world. She said that Abdul Kalam's life, his character and thoughts are inspiration to all the people, especially the youth. He had a lot of love and affection towards children and students, in fact he was very much fond of teaching.

Students must remember that Abdul Kalam died while he was delivering a lecture at the Indian Institute of Management, Shillong, from an apparent cardiac arrest on July 27, 2015, at the age of 83, she informed.

The students and youth must follow in his footsteps and achieve higher goals in their lives, she suggested. The members of the Vibrants of Kalam from Khammam, T Srinu and T Ashok and local representative BV Raghuram Raju, students and faculty members of the college were present on the occasion.