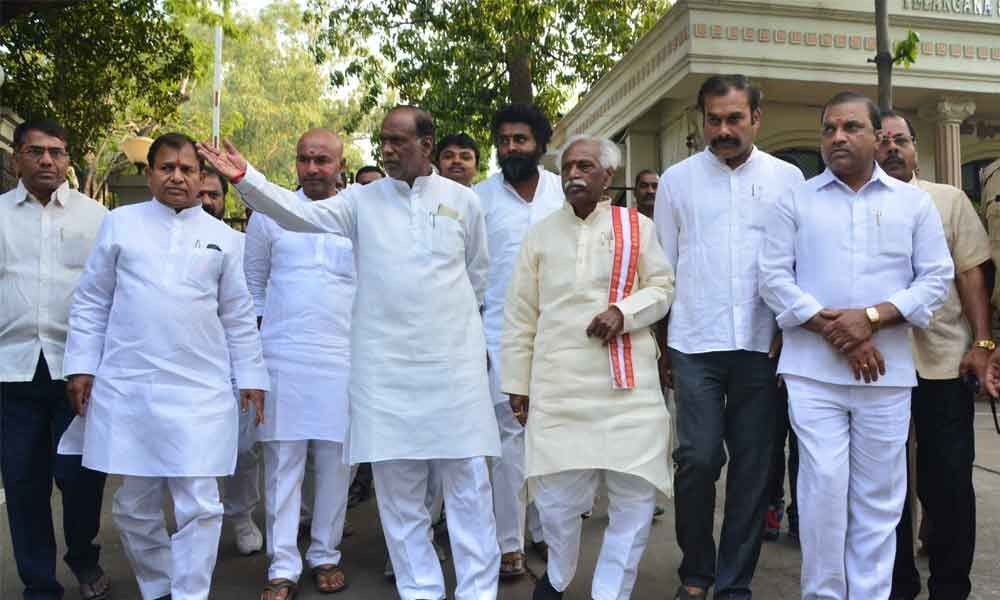 The delegation informed the DJP about the attempts of illegal construction of religious structure at Amberpet and complained about the highhandedness of the city police on their party's floor leader T Raja Singh.

The BJP alleged that to dilute the Intermediate results fiasco and the students suicides, by colluding with MIM, the ruling TRS party made a conspiracy and created tension in Amberpet in the name of communal disputes.

They requested the DGP to constitute an enquiry into the incident and the misuse of powers by the City Police. The delegation demanded that the DGP register a case against MLA Ahmed Pasha Quadri and other MIM leaders.

They further demanded that City Police Commissioner Anjani Kumar apologise for his rude and unruly behaviour with Raja Singh on Sunday at Amberpet.

The BJP leaders also demanded that the GHMC demolish the make-shift structure claimed it to be a mosque and allow road widening in the Amberpet area.

After the meeting, speaking to the media at DGP office premises, K Laxman said that the DGP has assured them to take stringent action on the culprits and take steps to restore peace and normalcy in the area.

He alleged that as the debate was going on the religious structure, which was demolished by the GHMC officials, the MIM leaders offered prayers at the site in question claiming that it was a mosque.

They made the local problem as a law and order issue for their vested political interests and raised communal tensions in Amberpet, he added.

BJP senior leader Bandaru Dattatreya alleged that by conspiring with MIM, the ruling TRS government is trying to obstruct the development process in the city by creating hurdles for the Amberpet-Ramanthapur flyover bridge.

"If the government does not take the issue seriously and register cases against the MIM leaders, then we will intensify our agitations along with people's organisations," Dattatreya added.