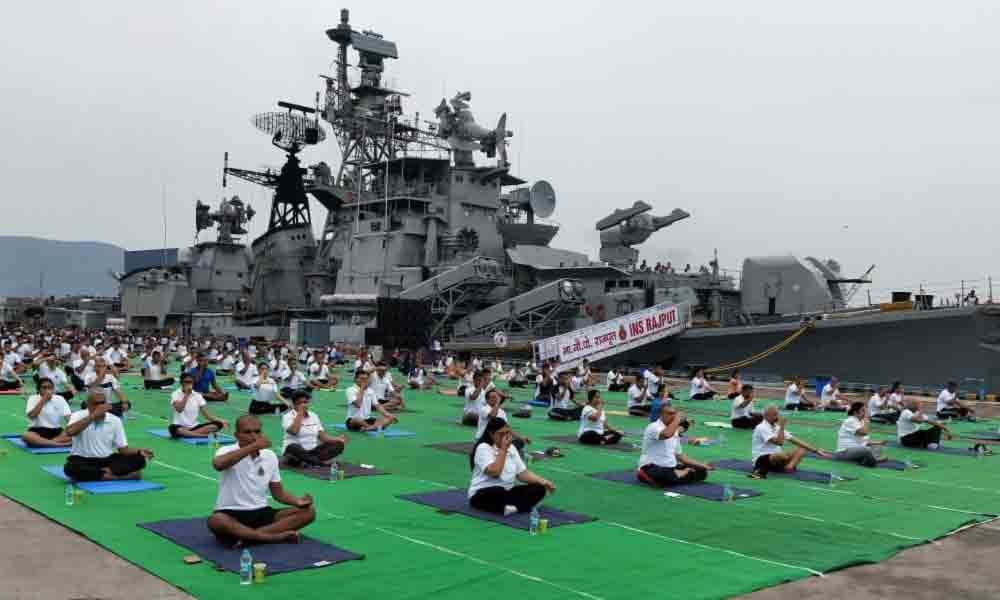 Eastern Naval Command (ENC) celebrated International Yoga Day with a participation of close to 20,000 naval personnel, including defence civilians and their family members.

Visakhapatnam: Eastern Naval Command (ENC) celebrated International Yoga Day with a participation of close to 20,000 naval personnel, including defence civilians and their family members. As part of the celebrations, personnel onboard ships and submarines practised yoga. Flag Officer Commanding-in-Chief, ENC Vice-Admiral Atul Kumar Jain, joined the families of Eastern Fleet during the session along with Devina Jain.

The yoga session started with the opening prayer and was followed by standing and sitting yoga postures, pranayama followed by meditation based on the common yoga protocol released by the Ministry of AYUSH.

All units under the ENC spread across the Eastern Seaboard from West Bengal to Tamil Nadu participated in various yoga related activities. Special yoga sessions were also conducted in unique forms, including aqua yoga in the swimming pool, airfield yoga at INS Dega, hill top yoga at Dolphin Hill, drill yoga on the Parade Ground at INS Circar, yoga in hospital at INHS Kalyani and yoga in residential-cum-community centres.