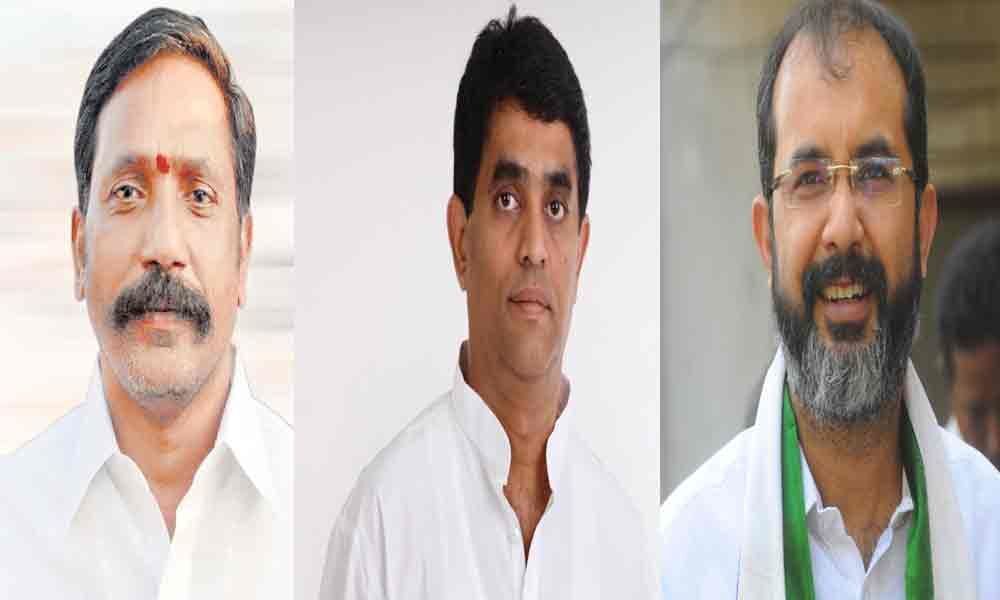 The aspirants stationed in Amaravati for the last two days are seeking blessings of party top leaders to get Cabinet posts.

Kurnool: The newly elected MLAs from the district have started lobbying for ministerial berths. The aspirants stationed in Amaravati for the last two days are seeking blessings of party top leaders to get Cabinet posts. The YSRCP had won all 14 Assembly and 2 Lok Sabha seats in the just concluded elections for which the results were declared on May 23.

Buggana Rajendranath Reddy, the Chairman of the Public Accounts Committee (PAC) has won two consecutive terms from Dhone Assembly constituency. On the other hand, Katasani Rambhupal Reddy, the six-time winner as MLA, won Panyam seat, Silpa Chakrapani Reddy, a dynamic political leader has sacrificed his MLC post at the time of Nandyal by-election and joined the YSRCP and won from Srisailam Assembly constituency.

Kangati Sridevi, the only woman contestant in the district, won from Pathikonda by defeating KE Shyambabu, the son of deputy CM KE Krishna Murthy. MA Hafeez Khan, the new contestant, though he is in politics since last two years, has contested for the first time and won Kurnool Assembly seat. He had defeated TG Bharath, son of Rajya Sabha MP TG Venkatesh. Even, the Y Bala Nagi Reddy of Mantralayam and Y Sai Prasad Reddy of Adoni, who are brothers, are in the race for ministerial berths.

The YSRCP likely to allocate 2 Cabinet posts to the district. Buggana Rajendranath Reddy, who played a key role in State politics and served as PAC chairman is expected to get the ministry under seniors' quota, according to political analysts. Referring to another post, the political experts has said that it may be given to minority community.

In that sense, MA Hafeez Khan may have the chances to confirm his berth in Jagan's cabinet, but what portfolio they are likely to get is a big question. Chances are bright for Kangati Sridevi under women's quota.

Gummanur Jayaram of Alur, a second time MLA from the party is also trying for Cabinet post under BC quota. According to the political analysts, the YSRCP is like to allocate one post each to two parliamentary constituencies.

If it is considered on the Parliament constituency basis then the chances will be for only two MLAs, may be one from Reddy community and the other minority. The aspirants, who are lobbying for cabinet berths have close access to YS Jagan Mohan Reddy and other senior leaders in the party.

On the other hand, Katasani Rambhupal Reddy is also trying for a berth in cabinet through his close relative Gali Janardhan Reddy, former Karnataka minister. All the MLAs, along with their supporters are likely to stay in Amaravati for the next couple of days, party senior leaders stated.